The year was 1960. The young man finally plucked up the courage to ask the pretty girl who'd caught his eye to be his girlfriend. Her name was Daphne.

Today, Alec De Kock has no regrets. The devoted couple from Salsoneville in Gqeberha recently celebrated their 60th wedding anniversary surrounded by children, grandkids and great-grandchildren. They're the perfect example of love, patience, and commitment.

To mark the milestone occasion, the family of Alec and Daphne (both 81) spoiled them with an intimate family lunch, complete with a display of white and gold balloons.

Although it was a day of love and laughter, for Alec it was also bittersweet because five years ago, Daphne was diagnosed with dementia. Now, it's up to him to remind her of the many memories of their life together.

Daphne has stage 4 dementia, which means although the cognitive decline is moderate, there are still marked signs of memory loss.

Alec admits that it's been hard since his wife's diagnosis, but he's determined to fulfil his commitment to her. The couple live together in a retirement facility.

“It's tough. I have to monitor her 24/7. I must run the house, buy groceries, clean up, and do the laundry. My interests include gardening, and that's had to come last. For the whole of last year, I didn't touch my garden,” he explains. “My wife is my priority.”

But he reckons the good still far outweighs the bad. The De Kock family celebrated Daphne and Alec's milestone anniversary with an intimate lunch in the Eastern Cape. (PHOTO: Supplied)

As Alec and Daphne chat to us over the phone from Gqeberha, he fondly recalls how they met 62 years ago in Makhanda (then Grahamstown).

I took him a while to pluck up the courage to ask her to be his girlfriend, he says, and she made him work for it.

“I had to wait three days before I got an answer. When she agreed, she said she'd prayed to find a boyfriend. It should be quick, and he should be a good man,” he says.

They got married on 1 December 1962 at the Grahamstown Congregational Church.

“I was an hour late for the wedding. I was so embarrassed,” Alec recalls with a chuckle.

The retired boilermaker shares how he managed to handle the highs and lows of marriage.

“As a couple, you must find common ground,” he says.

“Our interests are different; be it sport or music. You must have a good understanding and be able to accommodate each other. You have to be considerate. Your friendships are important. You can't have your own friends — they must be mutual."

But ultimately, he believes what made their love last is their constant service to the church. The couple are both deacons and serve as elders in the church.

“We have a mutual interest in choir, which we're still a part of,” Alec says.

'My wife is my priority.' The couple with their grandchildren (from left) Hermione, Nina, Alexine, Lauren and Alchinne. (PHOTO: Supplied)

Tessa is Alec’s niece whom the family adopted when she was three months old.

"I'm extremely grateful for the children the Lord gave us,” Alec says.

Seeing their kids is the highlight of their week.

According to their children, Daphne's dementia has remained relatively stable and to their relief hasn't progressed too noticeably, but each one of them has been trying to support their parents during this phase in their lives.

“We're trying to support them both. The thing that stands out for me is the fact that she still remembers all of us, including our kids. It's not easy, especially for my dad. We're trying our best to assist where we can."

Noel says everyone chips in to help.

“My brother had them on the Meals on Wheels programme which comes through to them three times a week. Luckily, my dad still drives his car – they go to church and choir practice,” she says. “We could get someone in to help them, but Dad doesn't want that." 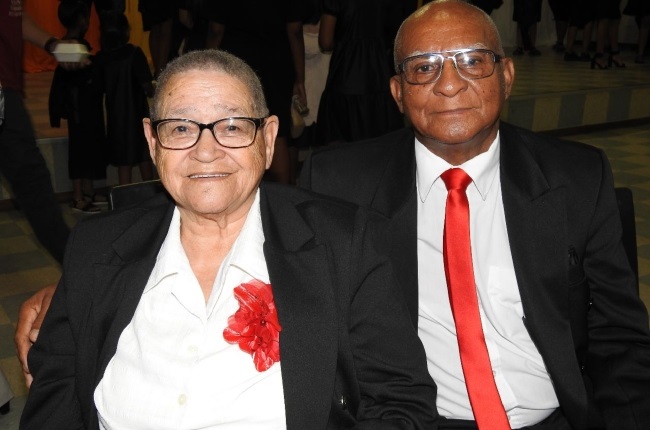 The couple serve as elders in their local church where they got married. (PHOTO: Supplied)

READ MORE| 'She's a living miracle': parents of girl with rare Richards-Rundle syndrome tell how their child defied the odds

With both their parents being members of the choir, singing is a big deal in the family.

Their only son, Llewellyn, reveals that for the births of all her children Daphne, who worked as a midwife, elected to travel to Grahamstown so she could give birth at her mother's home.

“When my mother was scheduled for labour, she'd have to drive down to Grahamstown. I remember all the trips and we'd sing hymns from the start until the time we got to the destination,” he says.

It's a point of pride for the family that all the De Kock children are happily married, just like their parents.

“I'm extremely proud of them. They're setting such a good example to all of us, and I can just pray that I can reach such a milestone with my husband,” their daughter Rhona says. The couple are very proud of the fact that all seven of their children are happily married. (PHOTO: Supplied)

Alec patiently jogs his wife's memory on a daily basis, reminding her of all kinds of things, such as that her favourite colour is blue and she likes two servings of oat porridge for breakfast.

“Some days, I question why this has happened," he admits. “All I wish for is that God, in his own way, restores her health."

But he vowed to stick with her through sickness and in health, and now that's what he plans to do.

"These days, people get married and they don't get married for the right reasons," Alec tells us. "You must honour the vow that you make."

We live in a world where facts and fiction get blurred
In times of uncertainty you need journalism you can trust. For 14 free days, you can have access to a world of in-depth analyses, investigative journalism, top opinions and a range of features. Journalism strengthens democracy. Invest in the future today. Thereafter you will be billed R75 per month. You can cancel anytime and if you cancel within 14 days you won't be billed.
Subscribe to News24
Next on You
Rap is a big part of the equation in this maths teacher's plan to help learners crunch the numbers