Cape Town couple on their never-ending voyage: ‘We planned to be modern-day nomads’ Lisa and André du Toit left their careers behind to follow their dreams of travelling. (Photo: Supplied)

Imagine a life without long hours spent in front of a computer screen or in mind-numbing meetings. No more soul-destroying traffic jams on your way to an important appointment. And best of all: no mortgage payments.

It probably sounds too good to be true, but that’s exactly the life André and Lisa du Toit chose for themselves.

Three years ago, the couple decided to turn their back on their successful careers, sell their Stellenbosch home and most of their belongings, and embrace the nomadic lifestyle.

Now, the Du Toits are seldom in one place for long, choosing instead to be modern-day nomads. “Often, we don’t even know where we’ll be the next week,” Lisa (39) tells YOU. 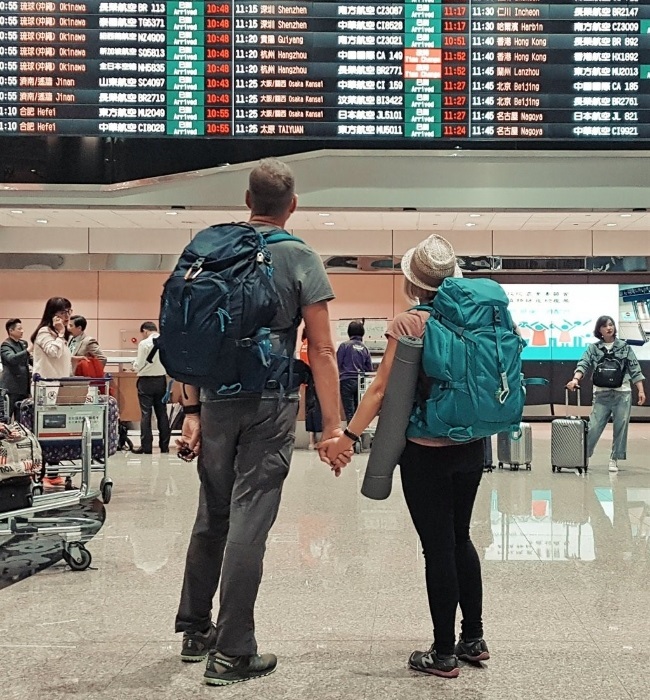 Ready for the next flight. The couple at the airport in South Korea in 2019, looking for the cheapest flight. (Photo: Supplied)

The couple have been all across Europe and Asia, but André (48) is quick to point out their lifestyle isn’t for everyone. “It requires full-time planning, and you need to learn to live with just the basics,” he says.

Many people might also find it traumatic to realise they have no permanent home to return to, which is why they didn’t come to their decision lightly. “We worked for more than a decade and planned for the day we could start our nomadic lifestyle,” Lisa says.

André and Lisa are chatting to us from the porch of a stone cottage high on a mountain slope in Italy, where they’ve been staying for five weeks. The cottage belongs to family of hers who lives nearby, says Lisa, who grew up in Cape Town as “half Italian, half English”.

When they met back in 2004, Lisa was studying for an engineering degree, while André was the IT head of the engineering faculty at Stellenbosch University. She visited his office often whenever she had issues with her computer, she recalls, smiling at him.

“There was one incident where I had to beg him for a new computer, and I must’ve done a pretty good job of it because I ended up getting more than a computer,” she laughs.

They fell in love, and Lisa found herself polishing her Afrikaans as André is a farm boy from the West Coast. André still struggles with the Italian his in-laws speak, he admits. “But I’m fluent in Italian cuisine,” he quips.

When the couple wed in 2008, Lisa’s friends and family “wanted to know what I was going to do with this older man,” she says. Despite the 10-year age gap, they share a love of adventure and travel.

In 2005, shortly after they met, they went on holiday to Tokyo, Japan. In 2007 there was a motorbike tour of Namibia, and in 2013 one in Vietnam. And in 2018 they did a grand tour of Europe in a borrowed camper van, through Italy, France, Switzerland, Austria and Hungary. There was also a later trip to Canada. “We travelled somewhere every year,” André says. “After our European trip, we realised we were ready to put into motion our plans for our ultimate goal of living a nomadic life.”

“Because if we hadn’t murdered each othered by that time somewhere along the way, we wouldn’t ever,” Lisa adds, laughing.

Back in SA, they set the ball rolling: they quit their jobs, sold their property and most of their possessions. By late 2018 they boarded a plane to Dubai, carrying only what could fit into the backpacks.

In 2019 they took nine international flights, visited eight countries and slept in 50 different locations. They travelled from Taiwan and South Korea to Malaysia and India – and they enjoyed all of it so much they struggle to recall a favourite spot.

Their wanderlust came to an abrupt halt in early 2020, when the Covid-19 pandemic hit. The couple had returned to SA in January 2020 from Cambodia to sort out personal admin and visit family and friends. But when the borders closed in March, they couldn’t go anywhere, and ended up staying in SA for 17 months. There are towns in Europe where it’s possible to overnight free of charge if you have a camper van. (Photo: Supplied)

“It was like a never-ending bad weekend,” André says. By late June this year, they were able to take flight again, and headed straight for Italy. And they’re determined to keep travelling. They don’t really plan too far ahead, instead they scour the internet to find the most affordable flights and accommodation.

But surely they need to have some kind of income to fund their lifestyle?

The most fundamental adjustment was to learn to live with only the basics, André says. “In 2019, for example, I only bought one pair of shoes and wore them until they fell apart. And in Europe there are towns that allow you to spend the night for free if you have a camper van, and they provide water and washing facilities.”

Their annual expenses are less than the taxes they used to pay when working full-time, Lisa says. “And remember, this was a long-term goal, so we saved up for this over 14 years,” André adds.

They’re also always on the lookout for possible extra income that can be earned online. Lisa taught some classes online for Stellenbosch University, while André did computer systems maintenance for the university.

We live in a world where facts and fiction get blurred
In times of uncertainty you need journalism you can trust. For only R75 per month, you have access to a world of in-depth analyses, investigative journalism, top opinions and a range of features. Journalism strengthens democracy. Invest in the future today.
Subscribe to News24
Next on You
Another stowaway, possibly from South Africa, defies death in harrowing transcontinental flight

Read more on:
nomadtravelingcouples
LATEST YOU