Concerns for PE boy with brittle bone disease: ‘My fear is he’ll break his spine and his neck’ Deshaan Juel's mom Delray says he has fractured over 15 bones since he was diagnosed with Osteogenesis Imperfecta (OI) Type 1. (Photo: Supplied)

Unlike most boys his age, he can’t play street soccer or climb trees with his siblings.

While his friends tear around the neighbourhood, Deshaan Juel sits safely ensconced in his home in Port Elizabeth.

Simply playing a game of footie with friends could have life-threatening consequences for the young boy who was born with Osteogenesis imperfecta type 1. The condition, commonly known as brittle bone disease, results in bones that break easily.

According to mom Delray Juel, Deshaan (12) has experienced at least 15 breaks. “I always have to be alert and ready in case something happens,” she says. “I’m always worried – my biggest fear is he’ll break his spine and his neck.”

Last month, Deshaan broke his right leg after accidentally stepping into a hole while playing cricket. Now the little boy needs surgery to have rods inserted into his legs, but his single mom can’t afford the much-needed operation. 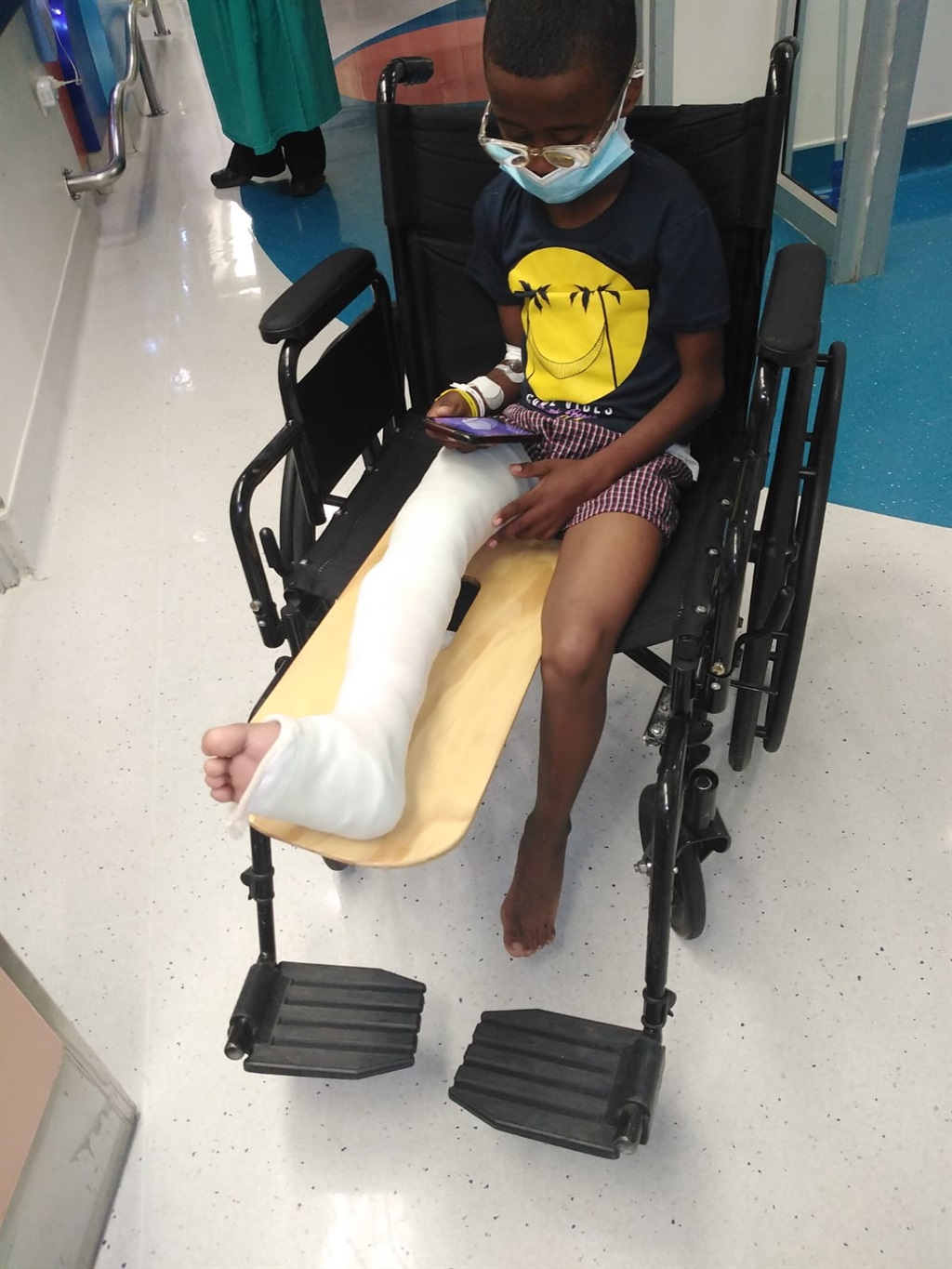 “The medical bills are starting to pile up and I don’t earn much. So, I started a BackaBuddy page to raise money towards his medical bills,” Delray tells us.

Delray (32) hopes the fundraising drive will also put the spotlight on Osteogenesis imperfecta type 1. “Most of the information I’ve read on the internet around the disease is not from South African websites.”

When Deshaan was diagnosed with the hereditary condition 11 years ago, she knew nothing about Osteogenesis imperfecta type 1. “It was stressful because I was young,” she says. “I didn’t know what to expect because no one in our family had brittle bone disease.” Deshaan in hospital with his very first fractures in his legs. (Photo: Supplied)

Deshaan was one when he was diagnosed. “He was trying to walk, and somehow he flipped and that’s when he suffered his first fracture in his legs,” his mom recalls.

“From then, he just suffered more and more fractures.”

One of the worst fractures, she says, occurred when he was eight. Deshaan, a Grade 6 learner at Northern Lights School, broke both legs and his left arm after taking a tumble. He spent six weeks in a wheelchair and needed surgery to insert rods in his legs and arm.

When he broke his leg last month, doctors said he’d need surgery to replace the rods. While they raise funds for the op, Deshaan is wearing a cast to help his bones heal.

It breaks his mother’s heart to see him hurt. “I feel hopeless at times because he’s emotional when the pain comes,” Delray says. “But once he gets his pain medication, he’s fine.” Despite his medical battles, Deshaan is a “strong and happy child with an unbreakable spirit” who loves making TikTok videos, she says.

Living with the condition has inspired him to help others like him, Deshaan tells us. “I want to be an orthopaedic surgeon, like my doctor and help people with Osteogenesis, like my doctor has helped me.” At the age of 8 Deshaan ended up in a wheelchair for six months after he broke both his legs and left arm. (Photo: Supplied)

While there’s no cure for Osteogenesis imperfecta, Delray is doing everything in her power to ensure Deshaan lives his dream. “I just want to help my son,” she says. “I just want him to be healthy and take care of himself.”

WHAT IS OSTEOGENESIS IMPERFECTA TYPE 1?

Osteogenesis imperfecta (OI) is a group of genetic disorders that mainly affect bones. Deshaan has the mildest form, OI type 1.

According to the Genetic and Rare Disease Information Center in the US, the condition is characterised by bone fractures that often result from minor trauma, such as falling or bruising.

While there is no cure, fractures occur less frequently in adulthood.

Treatment varies from person to person, says the Eunice Kennedy Shriver National Institute of Child Health and Human Development (NICHD).“Early intervention is important to ensure optimal quality of life and outcomes,” she says.

We live in a world where facts and fiction get blurred
In times of uncertainty you need journalism you can trust. For only R75 per month, you have access to a world of in-depth analyses, investigative journalism, top opinions and a range of features. Journalism strengthens democracy. Invest in the future today.
Subscribe to News24
Next on You
South Cape woman gets a second chance at happiness after losing her entire family in a crash