Eggs-traordinary! This 14-year-old Cape Town boy is running a chicken farm in his backyard 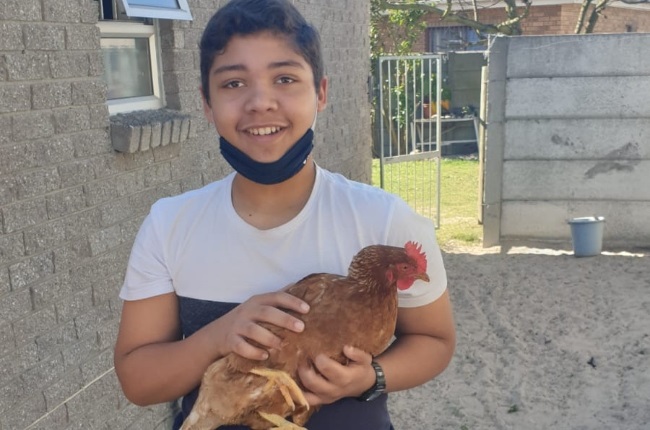 This young chicken farmer is putting all his eggs in one basket – and successfully so.

Fourteen-year-old Cole Oncke from Kuils River, Cape Town, recently started farming with chickens in his backyard, after not having much to do at home during his school holidays.

“There was nothing to do at home and I really wanted animals and a farm,” Cole says.

Now a few months after buying his first chick, Cole has 17 chickens and sells their eggs to his family and neighbours to make a bit of a profit. “It’s a hobby so I don’t charge them a lot for the eggs even though they are free-range.”

The Grade 8 learner’s love for animals and nature started when he was just four years old.

“I really liked being outside and working outside,” he says. “My uncle also bought me a rabbit and that’s where my love for farming and animals developed.” Cole started his vegetable garden at the age of four. (PHOTO: Supplied)

Cole then started his own vegetable garden in his backyard, which included peas, beetroot, carrots and lettuce. “I just grew vegetables for my house and family.”

But his love for farming didn’t stop there. After spotting some chicks at a local farmer’s market, Cole decided to buy his first two chickens on the online website Gumtree.

“I bought two chickens and then two weeks later I bought another two,” he says.

A month later, Cole decided to buy more chicks and fell in love with the process of raising the baby birds.

“I love the whole process of how plants grow, and I love raising the chickens. It's amazing to see.

“I don’t have to worry about my holiday plans anymore because I have my chickens,” he says.

Cole’s chickens lay approximately 10 eggs a day and he sells a tray of 18 eggs for R30 to his family and neighbours.

“My neighbour has a company, so his workers also buy my eggs,” says Cole, adding that he uses the profit to buy chicken food. The Grade 8 learner collects around 10 eggs a day. (PHOTO: Supplied)

Having the farm comes with its challenges, though. Cole's vegetable garden is in ruins because the chickens have been nibbling away on his produce.

He now hopes to buy cages for the birds so he can get his garden up and running once again.

Cole’s mom, Desiree (53), says she and her husband, Allistair (49), who are both correctional officers, were hesitant at first when Cole proposed the idea of having a chicken farm.

“I told him to leave the chickens because we have a bird, a dog, a fish, so it’s more expenses for him but he uses his pocket money,” says the doting mom.

But the parents slowly came around once Cole proved to them that he could successfully run his farm and manage his school workload.

“There must be a balance. You do your homework and you feed your animals.

“He’s very responsible towards his animals and he’s doing well in his exams so I let him do whatever he wants to do. His parents, Desiree and Allistair, are extremely proud of him. (PHOTO: Supplied)

“We are very proud of him, especially with his schoolwork,” says Desiree, adding that they’re a tight-knit family.

Besides farming, Cole enjoys watching the moon and stars with his telescope and cooking hearty food for his family.

“I’m really good at cooking. Sometimes my parents work on a Sunday and I’ll make food,” he says.

And the young entrepreneur has even more ambitious plans. He's looking into farming saffron, a spice derived from the flower of Crocus sativus. Cole now hopes his story will inspire other youngsters to pursue their farming dreams.

“You must be passionate about gardening and farming,” he says.

“Do your research. You must have goals for the future because without goals, what would you do in the future?”

We live in a world where facts and fiction get blurred
In times of uncertainty you need journalism you can trust. For only R75 per month, you have access to a world of in-depth analyses, investigative journalism, top opinions and a range of features. Journalism strengthens democracy. Invest in the future today.
Subscribe to News24
Related Links
MY STORY | ‘I was born without hands – but that hasn’t stopped me from becoming a farmer’
‘These cats are like my therapists’: Free State cattle farmer on how his tigers helped him...
Northern Cape farmer rescues two bokkies that were almost a jackal’s dinner and has made them her...
Next on You
Bloem parents left heartbroken after the suicides of their daughter and her partner

Read more on:
poultryfarmingchicken
LATEST YOU