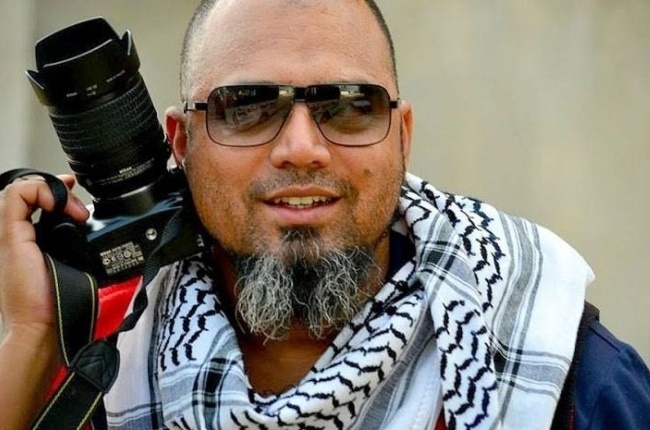 Shiraaz Mohamed was kidnapped by members of Isis while covering the humanitarian crisis in Syria. (Photo: Facebook/Shiraaz Mohamed)

Photojournalist Shiraaz Mohamed, who returned to South Africa early this year after he was kidnapped in Syria in 2017, has opened up for the first time about how he fled the clutches of his captors on 14 December last year.

Shiraaz (42), from Johannesburg, was abducted by members of Isis while covering the humanitarian crisis in the war-ravaged country with relief organisation Gift of the Givers.

Over the course of the three years, his kidnappers released a few videos in which he begged for help and said he feared for his life. Back home in Joburg, his family had no idea when – or if – they would see him again.

“I’m still dealing [with] it,” Shiraaz tells YOU. “I’m seeing a psychologist and the fact that I’m out shooting [photographs] every other day brings some sort of therapeutic relief.”

Shiraaz recently took to Facebook to say he was planning to write a book about his harrowing experience. He also paints a vivid picture of his nail-biting last few days in Syria.

“December 14 2019, 8.15am. I am finally on ground level. It took me about half an hour to break open a wire mesh and wiggle my way through a small frame that was meant to provide air to the underground bunker where I was kept.

“Once free, I had no idea where I was going, I know I just needed to get as far away as possible from where I was kept. I made my way through the olive groves. It was raining since the previous evening and it was muddy, making it difficult for me to walk. I tried to avoid any roads and found it safer to be amongst the olive trees.”

Shiraaz says he crossed three mountains and on two occasions came dangerously close to slipping on the mountain cliffs.

“Had I slipped, that would have been the end of me,” he writes.

He says he eventually arrived in a remote village. A man on a motorcycle came across him and offered him a ride but soon became suspicious.

“He wanted to know where I came from. I just kept on saying, ‘Maafi Arabia, maafi Arabia’ which means, ‘I don’t speak Arabic’. I had picked up about 10 to 12 Arabic words during the three years and it’s amazing how one can construct a sentence with the use of one or two words.”

He asked the man to get him to a hospital and offered to pay him. “My plan was to get either into a highly populated area or to a hospital. He seemed angry and said he did not want money, he wanted to know where I had come from.”

Eventually the two men arrived at a small supermarket and entered.

“I tried to avoid telling people that I was kidnapped, out of fear of getting re-kidnapped by them. In Syria, that is a very big possibility.”

SA photo journalist Shiraaz Mohamed is reportedly alive in Syria. A video showing Shiraaz appealing for help has gone viral. He went missing in Jan 2017 while on a humanitarian trip with @GiftoftheGivers - @DIRCO_ZA @GovernmentZA pic.twitter.com/cQDtGdZLsE

Shiraaz says the more he tried to avoid telling the truth, the more suspect he looked. One man jumped on a counter as if he wanted to attack him. Fortunately, he didn’t.

Instead another man dressed in military uniform walked into the supermarket to buy cigarettes. He spoke English and other customers told him about Shiraaz.

“We spoke and eventually I realised that I had no option but to tell him what happened to me. I said I needed to get to a hospital as that would probably be my best bet to get to Turkey.”

The army official said the “police” were on their way and would take him to hospital.

Concluding his post, the journalist expressed heartfelt thanks to everyone who’d supported his family during his long absence.

“It is prayer that brought me back home. Thank you.”