When Christoff and Tarryn Bell tied the knot in 2010, they didn't imagine that most of their life together would be dedicated to charitable works.

The couple, who had been living in George in the Western Cape, had been married for just a month when Christoff, a medical doctor, was placed at a hospital in Sodwana Bay, on the north-western coast of KwaZulu-Natal.

Tarryn and Christoff packed up their belongings and traded suburban living for a scenic but rural Zulu community.

“It was very traditional and an extreme culture clash at first,” Tarryn recalls. “We thought we would just stay for a year because it was very different from the Western Cape.”

But more than a decade later, the Bells now call KZN home.

They have since moved to the countryside community of Ingwavuma, where they run Butterfly Home, a hospice for children with palliative care needs.

Tarryn and Christoff started the home in 2018 after adopting their second son, Sibusiso, who was found abandoned in a bush outside Orlando Stadium in Soweto.

The couple have another adopted son, Joshua (6) and daughters Illy (7) and Sienna (1) 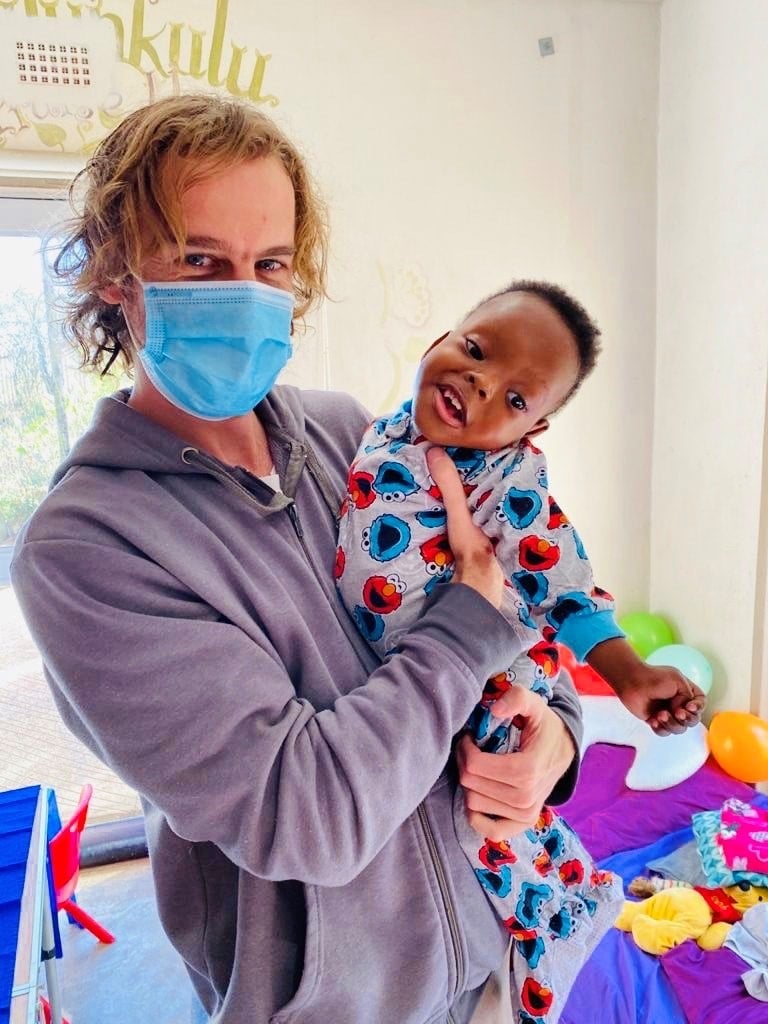 Sadly, Sibusiso died at the age of four after complications from Edwards’ syndrome, a condition that causes severe developmental delays.

Their son's legacy lives on through the Butterfly Home, which cares for six children and employs 12 caregivers.

“It’s incredible how this baby, who was found in the bushes, ended up starting one of only a few hospices for kids in the whole of KZN,” Tarryn says. Inside Butterfly Home, where they currently care for six kids. (PHOTO: Supplied)

The 36-year-old social worker says she and Christoff began their journey with palliative care in 2012 when they met a little girl with Down's Syndrome, named Ncamfile, who lived in a local orphanage.

“She spent the first year of her life in hospital after her mom died from AIDS-related complications during childbirth,” Tarryn explains.

At the orphanage, Ncamfile fell ill and was in and out of hospital, where Christoff (37) treated her in the paediatric ward.

Tarryn says they arranged with the orphanage that Ncamfile would spend weekends with them.

“We didn’t feel ready for kids yet, but we felt we were being called to helping her,” she says.

Tarryn and Christoff were heartbroken but they knew their journey with palliative care was just beginning.

“Because we are Christians, we felt within our spirit that this would be our calling one day. We felt God say we would love but lose babies again.”

In 2018 the couple received a phone call from a child and youth care center in Benoni, Gauteng, asking if they would like to adopt Sibusiso.

Tarryn and Christoff were on the the center's system after adopting their son Joshua (now 6) when he was six months old in 2015.

Because Joshua has Down’s syndrome and autism, the center thought the Bells would be a perfect fit for Sibusiso, or Si, as he was affectionately called.

“He was estimated to be six months old and was nearly dead when he was found,” she says.

“He was dehydrated, emaciated and was in a horrible condition.” Tarryn and Christoff declined because they felt they could only cope with one special-needs child. But the center was persistent, and after declining twice, the couple agreed to take him in.

“We couldn’t shake the feeling that maybe we were called to care for this child,” Tarryn says of their decision to adopt Sibusiso.

“We were reminded of when we lost Ncamfile and how we felt God say we would love and lose babies again.”

In the months it took to finalise the paperwork for Sibusiso’s adoption, Tarryn and Christoff decided to open a nursery where they would care for Si and other babies like him. They also employed four caregivers.

A week after Sibusiso arrived, another abandoned baby was placed in their care, and soon they were looking after six children. Lindiwe Mngomezulu, one of the caregivers, cradles Smangi. Smangi has a condition called Hydrocephaly. (PHOTO: Supplied)

“When baby Sibusiso arrived he wasn’t able to feed. I had to give him formula milk with an eye dropper.

“The specialist told us he would die before his first birthday.”

Sibusiso had facial and palate deformities. He also had epilepsy and severe scoliosis, which lead to his lungs twisting around his spine.

Because of this, he struggled to breathe on his own after catching a cold and had to be placed on oxygen.

But after just a few days, he died.

Sibusiso is the fourth baby who has died in Tarryn’s arms and his death was especially difficult.

“He was our first Butterfly baby so it’s hit me hard,” she says.

Tarryn and Christoff rely on the goodwill of people to keep Butterfly Home’s doors open.

At first they used Christoff’s salary as a doctor to pay for the caregivers’ salaries, but are now able to get by on donations. “But we get funding through word of mouth or social media. People contact us to ask for our bank details.”

Tarryn says living in such a rural town, where there’s no running water and the nearest shopping mall is more than three hours away, has many challenges and she’s often felt like giving up.

“We’ve had many difficult moments and our life is chaotic,” she says.

“My husband works day and night at the hospital and is on call to see to the babies’ medical challenges.”

It’s the support from her team of caregivers and family and friends from afar that keep her going. And when she holds one of her precious Butterfly babies in her arms, all of life's stresses melt away.

We live in a world where facts and fiction get blurred
In times of uncertainty you need journalism you can trust. For only R75 per month, you have access to a world of in-depth analyses, investigative journalism, top opinions and a range of features. Journalism strengthens democracy. Invest in the future today.
Subscribe to News24
Related Links
Local woman with swim school shares five swimming tips for kids with special needs
Couple rescues ‘special needs dogs’ with illnesses
Selfless pensioners dedicate lives to adopted disabled boy
Next on You
Bloem parents left heartbroken after the suicides of their daughter and her partner