For seven years Diederik du Rand lived on painkillers due to an untreatable joint pain in his right leg but after undergoing surgery, his life is now back on track. (Photo: Supplied)

It started as a niggly pain in his right leg that spread to his hip, and soon it became so unbearable he needed crutches to get around.

Because he couldn’t afford the hip-replacement surgery he needed, Diederik du Rand lived off painkillers. “I’d take up to 72 Grand-Pa powders a week,” he tells YOU.

But that’s all in the past now. Diederik (64) is back on his feet thanks to life-changing surgery he received from Cape Joint Surgery specialists Dr Deon Engela and Dr Nick Martin. The pair have dedicated their skills and expertise to providing pro bono orthopaedic surgeries to people in need.

Diederik was diagnosed with transient osteoporosis, a rare condition characterised by bone loss in the upper part of the thighbone. It’s caused by a range of factors such as obstructed blood vessels, mechanical stress on the bone or hormonal changes. “I first started feeling pain in my right leg and hip in 2015 – it felt like pins and needles,” he recalls.

“Over the years the pain became worse, especially when performing small daily tasks. Tying my shoelaces or crouching became almost impossible without help,” he continues. “I have no medical aid and couldn’t afford hip-replacement surgery. I lived off painkillers.” 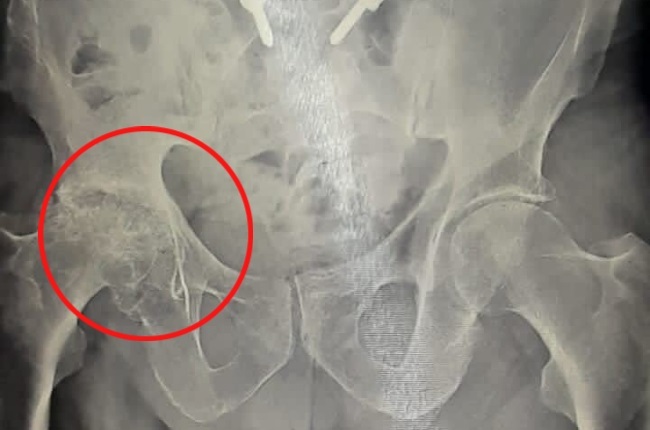 Diederik was diagnosed with transient osteoporosis, a rare condition characterised by bone loss in the upper part of the thighbone. (Photo: Supplied)

But no matter how many painkillers he popped he simply couldn’t get any relief.

Eventually, he lost the ability to walk and was forced to take medical leave. It was a devastating blow for the boilermaker from Emjejane (formerly Hectorspruit) in Mpumalanga. “I fell into a deep, dark depression,” he says.

Before his diagnosis, he weighed 107kg, but his weight dropped to 73kg. “I couldn’t eat or sleep. I was just in such a terrible state emotionally and physically,” he says.

Diederik, who’s married to Naomi (76), with whom he has two children, Sonja (41) and Dickie (40), and four grandchildren, is the breadwinner in the family.

Naomi is retired and when he lost the use of his legs, the couple lost their only source of income too. “I used to be so active as a father and in 2020 I couldn’t even do a simple thing my wife asked me to do. It was just such a difficult time,” he says.

READ MORE | ‘I wanted to end my life’: this Pofadder woman takes 400 pills a month to treat her autoimmune disorder

He lived in agony for more than five years, going back and forth to state hospitals desperately seeking help. But when he lost the use of his legs in 2020, Diederik took matters into his own hands. “I went onto Google and looked for doctors that could help me at no cost,” he says.

Though his search yielded no results, he refused to give up – even on days it seemed hopeless. “I spent a year or so looking for help online when one day I came across Cape Joint Surgery.”

Cape Joint Surgery offers free expert joint care by specialist hip and knee surgeons in Constantia, Cape Town. Engela and Martin, who’d both worked at state hospitals, started the practice in 2017 after noticing a need for joint-replacement surgery in the public sector. “While working at [private hospital group] Mediclinic in 2010 I’d also do pro-bono work at False Bay Hospital [in Fish Hoek] every Friday where I offered orthopaedic services,” Martin says.

During his two-year tenure he saw about 50 patients but regrets that he could do little to ease their pain. “It was so difficult to turn away patients who needed procedures because all I could offer them was medication. The waiting lists at state hospitals were between five and 10 years and some of the patients had even died waiting for a joint replacement,” he says.

He wanted to make a meaningful impact on the lives of his patients but to do so he needed a facility and equipment. Martin, who’d managed to secure knee- and joint-implant donations, then joined forces with Engela. The two had met while working at Mediclinic and Engela was more than happy to help his old colleague and friend.

Together with a team of anaesthesiologists, they provide healthcare for those who need joint-replacement surgery but can’t afford it because of exorbitant costs. Beneficiaries are selected using a specialised system that was created by an IT specialist. The criteria include things such as demographics and the severity of the patient’s condition. “We want to help primary breadwinners go back into the workforce and provide for their families,” Martin says. Diederik with his wife Naomi, who has supported him every step of the way. (Photo: Supplied)

Diederik was the perfect candidate, according to their selection criteria. He’d lost so much cartilage that his femur had become completely fused to his hip bone. To improve his condition, he needed complete hip-replacement surgery. During this procedure, the damaged sections of the hip joint is removed and replaced with parts that are usually constructed of metal, ceramic or hard plastic.

The entire procedure takes around 30 minutes. The Cape Joint Surgery manages 40 cases a year and they’ve helped about 200 patients since 2017. Martin says it wouldn’t be possible without the help of Mediclinic, who gives the Cape Joint Surgery access to its surgical facilities. Diederik with his daughter Sonja and son Dickie who helped him make arrangements for his surgery trip to Cape Town. (Photo: Supplied)

This allows the team to donate implants to hospitals that have the facility and skill for joint procedures. Cape Joint Surgery already has a good working relationship with Mitchells Plain Hospital, and they hope to collaborate with even more hospitals around the country in future. “We don’t want people to knock state hospitals because despite the ongoing challenges, there are still men and women trying their level best to help those in need,” Martin says.

“As private practitioners this is how we try to say, ‘We can help’.”

Diederik had placed all his hope in the Cape Joint Surgery team when he made the long journey to Cape Town last month. “When I left home, I kept on thinking that when I come back I won’t be the same person,” he says.

When he woke up after surgery free of pain, he was overwhelmed with emotion. “There was no discomfort, I became teary thinking about how much I suffered and just felt so thankful.” Diederik was discharged after a short recovery in hospital. He says Naomi was stunned when he walked through the door without crutches. “It was the greatest moment of my life.” The fused bone and cartilage have since been replaced with implants. (Photo: Supplied)

He plans to go back to work but first needs some physiotherapy. “I have a booklet from Cape Joint Surgery that shows me what I should do to get my muscles working again since my right leg had lost all motion,” he says.

He’s no longer bedridden and best of all, Diederik says it no longer takes an hour to put on a pair of socks. “I want to thank the doctors, staff and everyone at the facility who took such great care of me. They saved my life.” Just a couple of weeks after the life changing procedure Diederik regained his mobility again. (Photo: Supplied)
We live in a world where facts and fiction get blurred
In times of uncertainty you need journalism you can trust. For 14 free days, you can have access to a world of in-depth analyses, investigative journalism, top opinions and a range of features. Journalism strengthens democracy. Invest in the future today. Thereafter you will be billed R75 per month. You can cancel anytime and if you cancel within 14 days you won't be billed.
Subscribe to News24
Next on You
SA euthanasia activist Sean Davison on how he stayed sane during his three years of house arrest