‘I feel so helpless’: Secunda woman opens up after ziplining accident leaves her paralysed Merenthia Cronje is paralysed from the waist down because of a freak ziplining accident. (Photo: Supplied)

It started out as a day of fun and adventure but turned into a life-changing nightmare for Merenthia Cronje. Now wheelchair-bound, she says she’s been stripped of her dignity and independence after a freak ziplining accident left her paralysed.

“I used to be very independent,” says Merenthia (32), who worked as a safety coordinator in her hometown of Secunda in Mpumalanga. “I cleaned my own house and was always busy. Now I can hardly do anything for myself.”

Merenthia, her husband, Jaco (37), and their kids, Dihan (5), Janco (5) and Luhandré (3), were on holiday in December with her mom, Magda de Lange, in the picturesque Garden Route in the Western Cape.

Because beaches were closed due to lockdown, the family looked for other things to do and decided to go ziplining at the Tsitsikamma Falls.

“It was meant to be an adventure,” Merenthia says. “My mom really wanted to do it and we were looking for a fun family activity.”

Each of the three adults had a child in a harness strapped onto their harnesses. Magda went first. Then Jaco noticed some of the cables looked slack and asked the employees about it.

“They told him the cable was supposed to look like that and that he shouldn’t worry about it,” Merenthia recalls.

A separate cable connected the two parallel ziplining cables. When Jaco slid down, he went too close to the parallel cable and his leg hit it.

“When I started sliding, Jaco yelled that I must lift my legs up, but it was too late,” Merenthia recalls. She hit the cable with full force.

“I felt a stabbing pain in my back and neck, then I lost consciousness.” 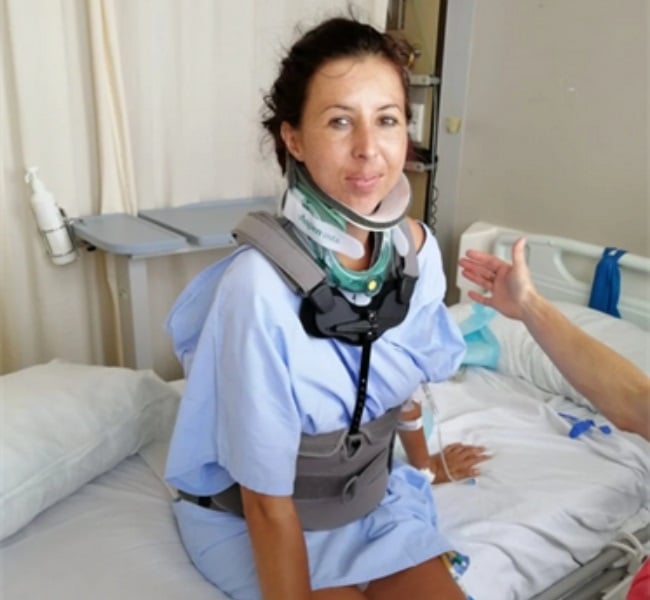 She and her son Janco, who was strapped to her, came to a stop halfway down the cable and the employees pulled them back to the platform.

She wasn’t breathing but Jaco performed CPR and she regained consciousness. They had to wait about three hours for the ambulance to arrive to take her to George Mediclinic.

“Thankfully, Janco was fine,” Merenthia says. “He just had a few superficial scratches.”

“It was a huge shock to be told I was paralysed. I’ve thought of suicide so many times since then. You feel absolutely helpless.” Merenthia with her husband, Jaco, and their three children, Dihan, Janco and Luhandré. (Photo: Supplied)

She spent six weeks in a rehabilitation centre in George. “I had to learn how to use a wheelchair and rely on my arms to get me around and do everything.”

The family are in the process of suing the adventure company for damages.

“I’ve been stripped of my dignity,” Merenthia says. “I have no bladder control and I have to wear nappies. My medication costs more than R3 000 a month and I’m largely dependent on donations because we can’t afford it. I can’t work anymore either.

“I want to prevent someone else from suffering the same fate or worse – dying.”

We live in a world where facts and fiction get blurred
In times of uncertainty you need journalism you can trust. For only R75 per month, you have access to a world of in-depth analyses, investigative journalism, top opinions and a range of features. Journalism strengthens democracy. Invest in the future today.
Subscribe to News24
Next on You
My stepmom stole more than R11 million and gambled it away - and I was arrested too