‘I was just thrilled’: meet the 94-year-old Free State great-granny who ziplined 1,1 km over the sea Marie Fick whizzed across the ocean on a zipline that holds the record for being the longest over-ocean zipline in the world. (PHOTO: Supplied)

This 94-year-old woman is proving that you’re never too old to try new things.

Marie Fick from Bloemfontein recently glided 1,1km across the ocean in Mossel Bay on a zipline that holds the record for being the longest over-ocean zipline in the world.

It’s an achievement the grandmother-of-nine is extremely proud of.

“It was very nice to glide down the mountain and then more slowly on top of the waves,” Marie tells us from Lofdal Retirement Village where she lives. The 94-year-old enjoying the view while ziplining in Mossel Bay. (PHOTO: Supplied)

“It was just too short. I was just thrilled, and it was really very nice.”

Marie first came across the zipline when she visited her daughter, Mariaan Joubert, who’s been living in Mossel Bay since 2012.

READ MORE | Over 50 and ready to cheer: Meet Japan Pom Pom's cheerleading grannies with a lust for life

Mariaan, who’s been wanting to go on the zipline for the past year, decided to take her mom along to watch the amazing ride. That’s when Marie decided that she wanted to experience it herself.

“I didn’t even think of asking her to do it because I just wanted her to sit there and just watch. But she said immediately, ‘No, no, no, I also want to do it,’” says Mariaan, who owns her own Pilates Studio.

“So, then I said, ‘Do it, why not?’ I was the one who felt like getting a heart attack and she was the one smiling,” she adds jokingly. 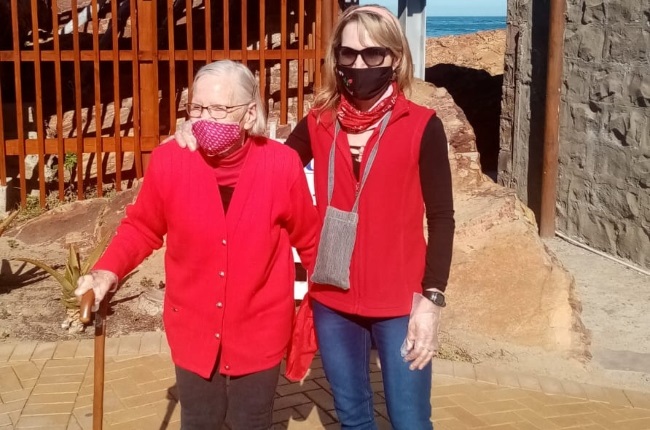 Marie first came across the zipline when she visited her daughter, Mariaan Joubert. (PHOTO: Supplied)

A few moments later, she witnessed her mom– strapped into a tandem harness with an instructor – whizz across the ocean and past caves, something she’s over the moon about.

“The tears were running down my cheeks. It was so precious to know that my mom at her age could do something like that.

“It was really the best thing I’ve ever done with my mom. She was just waving at everybody and she was smiling, she was such a queen,” Mariaan says.

“I didn’t think much about it and I just wanted to experience it and I wasn’t afraid. It was just a challenge and something to do. It was really a lovely experience,” she says.

Although it was an extraordinary thing to witness, Mariaan says she’s not at all surprised. The great-grandmother-of-four has been independent all her life.

“At the age of 92, she renewed her driver’s license. She’s still driving her own car; she likes to be independent and do her thing,” says the proud daughter, adding that her mom cooks her own meals and attends water aerobics classes twice a week. The grandmother was strapped into a tandem harness with an instructor. (PHOTO: Supplied)

“I still believe in exercising; I have a bike in my room, and I exercise on that as well,” says Marie. “I’m just fond of outdoor life – that’s why I enjoyed that ziplining also.”

Mariaan says her mom’s activeness was fostered by her dad, Uys Fick, who sadly passed away in 2012 at the age of 88.

“My dad used to be a comrades athlete. My mom and I joined him, so we would get up at 5:15am and do our 6km before work and school.

“She was also a runner, she did 10km races and things like that,” she says. The zipline company now hopes to build a 3,3km zipline nearby, something Marie says she’s keen on trying.

For now, she’ll stick to reading and spending time with her family. Marie can’t wait for her next ziplining experience. (PHOTO: Supplied)

“I’m really fond of reading and thankful that I can still read thick books, wonderful books, I don’t know how many short stories I have read – it’s lovely,” Marie gushes.

“I like cooking and making jams and canned fruits in the kitchen. I’m glad I’m still in good health and I hope to zipline again.”

We live in a world where facts and fiction get blurred
In times of uncertainty you need journalism you can trust. For only R75 per month, you have access to a world of in-depth analyses, investigative journalism, top opinions and a range of features. Journalism strengthens democracy. Invest in the future today.
Subscribe to News24
Related Links
This Joburg granny is one step closer to hugging her kids after getting her Covid-19 jab
101 and still going strong! Pretoria granny looks forward to many more birthdays
This grandmother is building bridges for the disabled, one Lego brick at a time
Next on You
Ntando Mahlangu chats to YOU about his victorious home stretch and life after school

Read more on:
grandmother
LATEST YOU