His daughter was just a baby when doctors told him he was in the throes of heart failure and he feared he may not live long enough to see his little girl grow up.

But the future is looking bright for Johan van Wyk (38), an electrician originally from eMalahleni (previously known as Witbank) – and it’s all thanks to the little piece of ground-breaking technology ticking away in his chest.

Johan is the first person in South Africa to receive the Abbott HeartMate3, a new mechanical heart device and the culmination of a nearly 10-year journey that saw him at death’s door several times.

He was 29 when he received the devastating news of his heart condition. “I was sick all the time with flu-like symptoms, seeing doctor after doctor. One doctor sent me for X-rays and tests and that’s when they discovered there was something wrong with my heart,” Johan tells YOU.

His heart-failure diagnosis caught him completely off-guard – there was no history of heart disease in his family.

“I went into denial. It just felt it couldn’t be true,” he says.

Johan then spent three months in intensive care at Life Wilgers Hospital in Pretoria. When he arrived, his heart function was just 18%, leaving him unable to walk more than a few metres and his feet badly swollen.

According to Dr Willie Koen, a leading cardiac and transplant surgeon at Netcare Christiaan Barnard Memorial Hospital in Cape Town, who is now also Johan’s cardiologist, a human’s normal heart function is between 55-65%. The Abbott HeartMate3 takes blood from the left ventricle and pumps it back into the aorta. (PHOTO: Supplied)

Fortunately, doctors at Life Wilgers were able to bring Johan’s heart rate up to 45% with the help of medication and he was able to go home.

In 2017, Johan moved to Monte Vista in Cape Town with his wife, Alischa, and their then-five-year-old daughter.

Then disaster struck. Soon after arriving in the city, he suffered a stroke and was rushed to hospital.

While he was in hospital, he was also fitted with a pacemaker, a device that sends small electrical impulses to the heart muscle to maintain a stable heart rate or to stimulate the lower chambers of the heart. He was discharged once his condition stabilised.

Johan’s organs started failing and his heart stopped pumping blood effectively to his brain and body. He was at risk of cardiac arrest if not treated immediately.

Doctors said they could do no more for him. “I refused to accept that,” Alischa says. “There had to be something they could do. The only thing I could think of was how I’d tell my little girl her dad had died.”

Then, in a desperate attempt to save his life, hospital staff contacted Dr Koen at Netcare Christiaan Barnard.

Dr Koen, a world-renowned cardiac and transplant surgeon and pioneer of ventricular assist device (VAD) implantation in South Africa, advised that Johan be transferred to Christiaan Barnard, where he could monitor his condition.

“Johan slipped into a coma shortly afterwards,” Alischa says. I sat next to his bed and wondered whether I would be raising our child alone.”

READ MORE | After losing his arms 23 years ago, this man has become the world's first double arm and shoulder transplant patient

After spending three weeks in hospital, Dr Koen managed to stabilise Johan and he was discharged. But over the next three months he was in and out of hospital for spells of two weeks at a time.

A heart transplant was his only hope – but finding a donor proved a challenge. “We couldn’t find a heart suitable for him,” Dr Koen says.

“Finding matching donor hearts has been even more challenging during Covid-19. And with heart transplants there’s the additional concern that patients need to be on immunosuppressants and are therefore more vulnerable to developing severe Covid complications.” 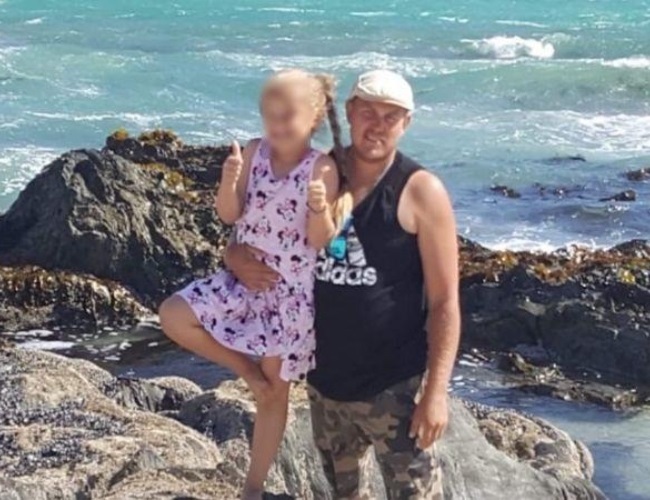 Johan opted for the mechanical heart so that he could spend more time with his nine-year-old daughter. (PHOTO: Supplied)

In a bid to buy Johan time, Dr Koen offered him the option of a mechanical heart.

“It’s a very good alternative to have in this time,” he says.

Johan grabbed the opportunity with both hands.

“They said I’d live for only a year if I didn’t take the mechanical heart. I have a family and I couldn’t do that to my little girl. In the end, I said: ‘Just put it in, then we’ll take it one day at a time’.”

The four-hour surgery was performed on 18 June and involved Dr Koen, assisted by cardiac surgeon Dr Loven Moodley, inserting the tiny device next to Johan’s heart.

“The device is a pump,” Dr Koen explains. “It takes blood from the left ventricle and pumps it back into the aorta, so it actually works as a ventricle. Basically, it’s like a small pump that pumps the amount of blood the heart would’ve pumped.”

The device is implanted in the chest and connected by a driveline which protrudes through the abdomen to a controller and battery pack outside the body. It can’t get wet so Johan must carefully wash around the device.

“I can’t bath or swim but it’s a small compromise that’s giving me the chance to have a new life.

“I have more energy, and I’m starting to notice I can do things again that my body just couldn’t manage previously,” he says, adding that the surgery was fully covered by his medical aid.

According to Dr Koen, patients can live successfully on this electric heart implant device for over 10 years. Johan, his wife Alischa, and their daughter moved to Cape Town in 2017. (PHOTO: Supplied)

“We have a lot of people on our heart-transplant waiting list,” he says. “The mortality of people on the list is high – about 20 to 30% die while waiting for organs. So now if we can see somebody can’t wait any longer, we can put this device in and the patient can go home and live a normal life while waiting for a donor heart.”

Johan and Alischa are optimistic about the future and deeply grateful for his new mechanical organ.

“It’s only by the grace of God that we got to where we are – God’s grace and smart technology,” Alischa says.

“My strength is coming back little by little,” Johan says. “I can walk two to three kilometres now.”

And for this family, that’s close to miraculous.

We live in a world where facts and fiction get blurred
In times of uncertainty you need journalism you can trust. For 14 free days, you can have access to a world of in-depth analyses, investigative journalism, top opinions and a range of features. Journalism strengthens democracy. Invest in the future today. Thereafter you will be billed R75 per month. You can cancel anytime and if you cancel within 14 days you won't be billed.
Subscribe to News24
Related Links
Northern Cape boy’s heart-rending plea to have his badly deformed leg fixed
This Eastern Cape teen is in desperate need of a stem-cell transplant
Meet Mbali Mbatha SA's first Covid-19 lung transplant recipient
Next on You
These young engineers are offering solutions for SA companies to communicate with customers in their own languages