Romario Valentine has been an eco-warrior for the past four years. (PHOTO: Supplied)

This young conservationist is determined to save the environment, one beach clean-up at a time.

Romario Valentine (9) from Umhlanga, Durban, has been an eco-warrior for the past four years and has dedicated every weekend to cleaning beaches and protecting the planet.

“He cleans the beach every week for one hour without fail,” his mom, Delsha Moodley (36), tells YOU. 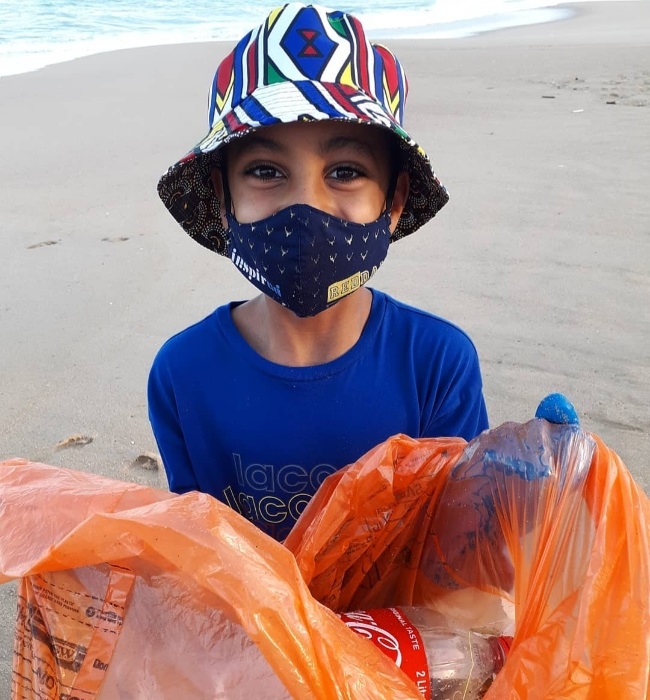 The nine-year-old cleans the beach every weekend for one hour. (PHOTO: Supplied)

“Trees have been planted on four continents and I recently teamed up with the United Nations Convention to Combat Desertification to help land degradation and biodiversity in Africa,” says Romario.

READ MORE | Meet Wally and Molly, the miniature mice making it fun to learn about the environment

Romario’s love for conservation started when he was just six years old, after he landed the role of an Orca in a school play. To learn more about what his role would entail, the little boy researched the species.

“I discovered that Orcas were endangered. So, I decided to do something about it by cleaning the beach weekly,” he says.

Delsha adds: “Even though he discovered we don’t get Orcas in Durban – they’re mainly found in Antarctica – he decided to continue cleaning the beach and getting as many pollutants out of the ocean as he can. He’s kept to that ever since.”

Romario made history by becoming the youngest ambassador for Ocean Sole, a Kenyan environmental organisation that promotes marine conservation by recycling old flip flops discarded in the ocean and turning them into art.

“I feel honoured to be given the opportunity to represent Ocean Sole. They’ve recycled over 750 000 flip flops. Ocean Sole and I both raise awareness by creating eco art out of pollutants,” says Romario, who plays chess and codes for fun. Delsha and his dad, Clive (45), are just as proud of the achievement.

“The ocean and nature are obviously his passion. He does his part to educate and raise awareness through his campaigns and online.

“We’re so honoured and the best we can do is guide him and pave the way for him to continue his journey because this is his passion,” Delsha says.

READ MORE | Royal on a rhino mission: the heartbreaking reason Princess Charlene is back in SA

For his 10th birthday on 26 July, Romario hopes to plant 250 trees for the deforestation programme run by the Zeitz Foundation.

“The roots of an acacia tree contain nitrogen and bacteria that make the soil fertile. It is also a source of food for giraffes, inyalas and black rhinos,” he explains.

“Fertile land is important for food security, sustainable jobs and habitat restoration. I like to support their programme to help slow down global warming and protect wildlife,” he adds.

Romario has also launched a Backabuddy campaign to raise funds for abandoned African grey parrots at Birds of Eden in Western Cape.

The youngster says he draws his inspiration from leaders such as Barack Obama, Nelson Mandela, Kenyan environmentalist Dr Wangari Maathai and, of course, his parents.

“I admire my mom and dad – they motivate me, buy me art supplies and educate me on the environment and nature. My mother was the first person to clean the beach with me.” The youngster paints pictures of birds in his spare time. (PHOTO: Supplied)

Romario’s next big plan is to write his autobiography.

“I want to publish my life story in a book to encourage children to help nature and to continue to raise awareness for conservation of the ocean and biodiversity in order to leave a legacy for other children and generations to come.”

For now, Romario is encouraging kids to do everything they can do to save the planet.

“You are never too young to help nature. I encourage children to plant trees, not to litter, to recycle, re-use and only buy things they need. World leaders need to involve children in their environmental goals too. I would like to see an international children tree planting day.”

We live in a world where facts and fiction get blurred
In times of uncertainty you need journalism you can trust. For only R75 per month, you have access to a world of in-depth analyses, investigative journalism, top opinions and a range of features. Journalism strengthens democracy. Invest in the future today.
Subscribe to News24
Related Links
Plastic fantastic: How two women from Orange Farm are creating ‘leather’ from waste
Why your cotton tote isn't better for the environment than plastic shopping bags
Prince Charles sings Greta Thunberg’s praises
Next on You
‘I love helping people’: meet the inspirational Soweto woman behind the Rebuild SA movement