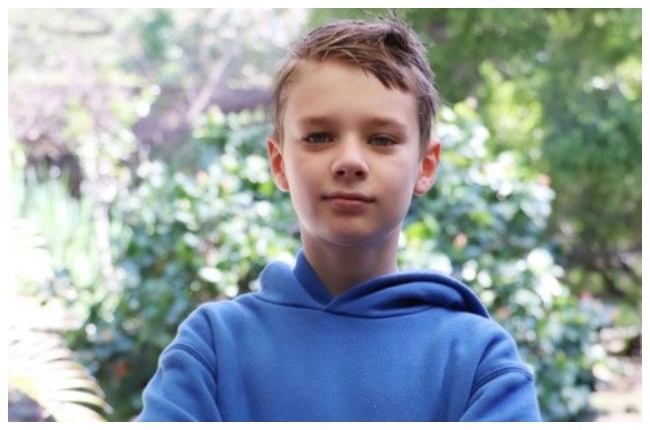 Jan Louwrens is the talent behind the cartoon artwork for the award-winning comic strip. (PHOTO: SUPPLIED)

Now, more than ever, we need a hero who can protect and reassure us – a hero like Captain Stay Safe!

Captain Stay Safe is a robot superhero who comes to Earth to help protect us from the coronavirus and his creator, 11-year-old Jan Louwrens, is already winning awards for his inspired creation.

Jan, a Grade 5 learner from Paarl in the Western Cape, was invited by Food for Mzansi, an agricultural news and lifestyle online publication, to create a comic strip to raise awareness around the pandemic, especially in rural areas.

The award is considered one of the top digital news awards on the continent and is presented by WAN-Ifra, the World Association of Newspapers and News Publishers. The annual event recognises publishers who have delivered unique and original digital media projects.

Captain Stay Safe will also be entered into the global finals of the WAN-Ifra digital awards, which takes place in Taiwan next year.

“I was shocked,” says Jan when he learnt his comic strip had snagged the award.

“When they called our name, for some reason I didn’t notice and just turned around and walked away. I wasn’t expecting to win,” Jan tells YOU.

Jan is very excited, about competing globally, and has high hopes that they will win again.

In addition to the comic strip, Thandi and Captain Stay Safe, Food for Mzansi also features a podcast with audio adventures of the duo, news updates and a cartoon series, Battle of Covid-19.

When Food for Mzansi contacted Jan to collaborate on the campaign, he was unfazed, as he’s been designing and sketching robots for as long as he can remember. Jan's mom Ronelle, says he is always experimenting with some sort of drawing. (PHOTO: ESA ALEXANDER)

Ivor Price, co-founder of Food for Mzansi, says they wanted to raise awareness around the pandemic, particularly in rural areas.

“We realised we had to focus our efforts to create awareness around safety and self-protection measures. Around the same time, the discussions about schools reopening were starting and we saw the anxiety that produced in children. We decided to focus this phase of our Covid-19 awareness campaign specifically on kids,” Ivor says.

When they decided on the comic-strip format, “we immediately thought of Jan”, he says. “He is already an impressive young entrepreneur who has been selling T-shirts with his robot characters on his website for a couple of years now.

“We asked Jan to come up with a character which would grip kids’ imaginations and could help us convey safety information and ease kids’ minds about stepping back outside of their safe, isolated homes.”

With a little help from his mom, Ronelle, Jan set up his online clothing shop, Baggo Stonetrip, when he was just nine.

“We sell robot hoodies and T-shirts, with prints of robotic creations that I design myself,” he says.

Ronelle says it started off as a fun T-shirt business but it is growing as Jan has now worked with companies to create designs for their marketing campaigns, she says proudly.

One of his designs is on the label of ViroGOLDSchool, a hand sanitiser used in schools around the country. One of his other robot creations have also made it onto the label of VirgoGOLDSchool, a hand sanitiser range used in schools around the country. (PHOTO: SUPPLIED)

Jan admits that the creation of Captain Stay Safe was tricky, despite his years of sketching, doodling and drawing.

“I had to come up with a unique robot character that would suit a Covid-19 theme. But once I had the idea pinned down, the rest was easy.”

The comic strip, which is available in all 11 official languages, also provides helpful tips for kids on staying safe against the virus at school.

The podcast, explains Ivor, is a kind of a children’s radio story. “Our team provided most of the voices and Jan played one of the children. We recorded all our parts as WhatsApp voice notes and edited them together.”

We live in a world where facts and fiction get blurred
In times of uncertainty you need journalism you can trust. For only R75 per month, you have access to a world of in-depth analyses, investigative journalism, top opinions and a range of features. Journalism strengthens democracy. Invest in the future today.
Subscribe to News24
Next on You
Hawks' Hangwani Mulaudzi speaks to YOU about the demands of his job