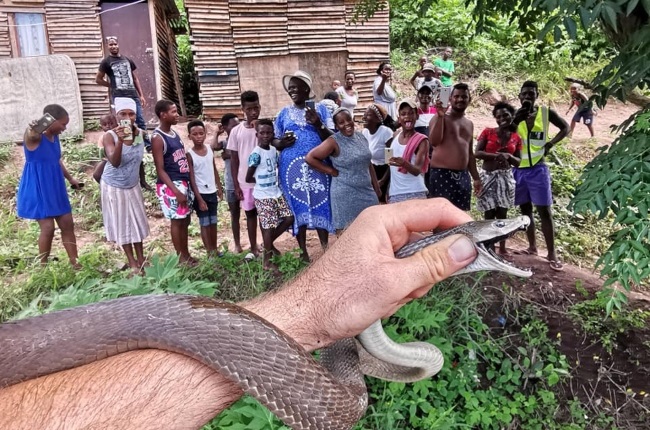 He’s been bitten several times and even strangled, but Nick Evans wants people to know there’s no need to be afraid of snakes.

After six years in the business, the popular Durban snake catcher has learnt the often-feared reptiles are actually more scared of us than we are of them.

“I find they are misunderstood,” Nick (27) says. Take his favourite, the black mamba – Africa’s longest venomous snake and among the fastest snakes in the world.

“I’ve heard all these stories about them being aggressive, but I’ve found all they want to do is get away.”

His passion for snakes started as a little boy when he watched The Crocodile Hunter, the show featuring late Australian environmentalist and wildlife expert Steve Irwin.

“He was so passionate and enthusiastic. I thought what he did was really cool, and I wanted to be like him.”

Nick would look for snakes in the complex where he lived with his mother and in his grandparents’ garden.

He placed adverts in the newsletter of his primary school, where his mother was a teacher, offering snake-removal services.

“We didn’t get many takers,” Nick admits.

But that didn’t deter him. After matric he worked at Dangerous Creatures, a snake park at uShaka Marine World in Durban, for two years.

He then went solo, doing snake removals and educational workshops. During his time as a snake catcher he’s caught many of the slithering creatures but the black mamba has become his favourite.

“It’s large size and fast-acting venom make it deadly but it’s a really exciting snake to work with.” Some may call it more terrifying than exciting, though. A few days into the new year, Nick was called in to an informal settlement near Chatsworth.

“I was told there was a huge black snake in a tree and it needed to be taken away immediately. I could hear a lot of people in the background,” he recalls.

When he got there, members of the community pointed to the tree and the minute Nick laid eyes on the snake he knew it was a black mamba.

“I reached forward with my tongs, and as I did so, the snake started moving. Its coils, as thick as an average adult arm, started unwinding slowly. I grabbed what I could, but very quickly realised I had grabbed the tail end.

“Now I got nervous. I once had a mamba by the tail in a tree, and it swung back at me. Was this going to happen again? The head did come back in my direction, but not in a charging manner – I think it wanted to climb higher.”

He let the snake go then grabbed its neck with his tongs. The snake started to pull out of Nick’s grip so he grabbed it by the head. And just like that the creature started wrapping its coils around Nick’s head, even covering his eyes.

“I sucked my lips in to avoid getting it in my mouth,” Nick says. ’’I could smell the curry-like smell of its musk and poo, and I could feel the wetness of this on my head.”

The snake then moved down to Nick’s neck. “I catch a lot of black mambas, but I have never had that before,” he admits.

“Generally mambas wrap around whatever they can get their coils on to pull out of your grip. But that one, I think because it was up a tree, wrapped around my neck.” A black mamba recently wrapped itself around Nick's neck in an attempt to escape. (Photo: Nick Evans Snake Rescue)

“I couldn’t just rip the snake off because it had thorny creepers from the tree all around it, so if I’d ripped, it would’ve torn its skin.”

One of the community members had to cut the creepers before Nick could free himself. Despite this frightening experience, Nick is still a big fan of the black mamba.

“In the greater Durban area there are about four million people and there are mambas everywhere. Yet we see only about two bites a year. Which goes to show that if they were out to attack there would be more bites.”

His wife, Joelle (29), is understanding and patient, Nick says.

“We can be at a dinner or family lunch and then I’d get called out.”

This is not a money-making job, he adds – it’s fuelled purely by passion.

“I was earning a bit of money through the educational work I did by going to companies and schools but then Covid-19 hit.”

He is, however, shooting a second season of his show Snake Season, which airs later this year and brings in some form of income.

Snake Season showcases Nick’s snake-rescuing work but does it in a fun manner.

“The purpose is to educate people, not scare them.”

His tip on how to handle being confronted by a snake?

“Don’t chase the snake away or try to kill it because then it will attack you. Rather leave the area and wait till a snake catcher arrives”.

We live in a world where facts and fiction get blurred
In times of uncertainty you need journalism you can trust. For 14 free days, you can have access to a world of in-depth analyses, investigative journalism, top opinions and a range of features. Journalism strengthens democracy. Invest in the future today. Thereafter you will be billed R75 per month. You can cancel anytime and if you cancel within 14 days you won't be billed.
Subscribe to News24
Next on You
Inspiring attitude of teen who was mauled by a tiger as a toddler: ‘I’m just happy to be me’