When Andre Bauma met her, she was just two months old. Rangers had found her clinging to the body of her dead mother and brought her to Andre to take care of.

Now the gorilla has passed away, dying in the arms of the man who devoted 14 years of his life to her.

A statement released on Wednesday by the Virunga National Park in the Democratic Republic of Congo says Ndakasi died last month after a prolonged illness “in which her condition deteriorated rapidly”.

“It is with heartfelt sadness that Virunga announces the death of beloved orphaned mountain gorilla Ndakasi, who had been under the care of the park's Senkwekwe Centre for more than a decade.”

Andre is lamenting the loss of what he calls his lifelong friend. “It was a privilege to support and care for such a loving creature, especially knowing the trauma Ndakasi suffered at a very young age,” he says.

“It was Ndakasi's sweet nature and intelligence that helped me to understand the connection between humans and great apes and why we should do everything in our power to protect them.”

Ndakasi, a member of the Kabirizi group of mountain gorillas, was discovered by park rangers in 2007, holding onto the lifeless body of her dead mother who had been gunned down by armed militia.

The rangers knew it was too dangerous to leave Ndakasi to fend for herself and took her to the Senkwekwe Centre, which is the only centre in the world that cares for orphaned mountain gorillas.

There she met Andre who took her under his wing and the two had an instant connection. “All night long, Andre held the baby close to him,” the park said in a statement.

“I played with her, I fed her. I can say I am her mother,” Andre said.

Ndakasi went on to feature in several TV shows, but it was the selfie moment that captured hearts and made her famous. Two years ago, Ndakasi and Ndeze, another female orphaned gorilla, photobombed a selfie taken by another park ranger, Mathieu Shamavu. Mathieu shared the photo on Facebook with the caption, “Another day at the office”, and it went viral.

“Those gorilla gals are always acting cheeky, so this was the perfect shot of their true personalities! Also, it’s no surprise to see these girls on their two feet either, most primates are comfortable walking upright [bipedalism] for short bursts of time,” the park responded on Instagram.

READ MORE | A royal nod: meet the 14-year-old Cape Town boy who received the Diana award for his conservation work

According to Virunga, mountain gorillas were critically endangered in 2007 and the massacre in which Ndakasi’s mom was killed led to security reforms strengthening the protection of the mountain gorillas. 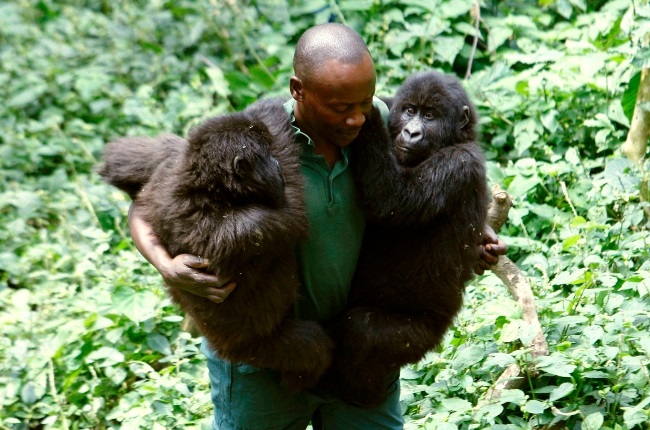 A younger Ndakasi (left) and Ndeze being carried by a Virunga National Park ranger in 2010. (PHOTO: Gallo Images/ Reuters)

“Over the course of her [Ndakasi’s] life, the species has grown by 47% from 720 individuals in 2007 to an estimated 1 063 in 2021,” the park said, adding the death of Ndakasi highlights the importance of protecting gorillas in their natural habitat.

Andre says Ndakasi will be missed because she always brought a smile to his face. “I am proud to have called Ndakasi my friend. I loved her like a child and her cheerful personality brought a smile to my face every time I interacted with her,” he says.

“She will be missed by all of us at Virunga, but we are forever grateful for the richness Ndakasi brought to our lives during her time at Senkwekwe.”

We live in a world where facts and fiction get blurred
In times of uncertainty you need journalism you can trust. For only R75 per month, you have access to a world of in-depth analyses, investigative journalism, top opinions and a range of features. Journalism strengthens democracy. Invest in the future today.
Subscribe to News24
Related Links
Talk about the cat’s whiskers! Meet Manny the amazing selfie cat
Meet the great British bunny who weighs 9kg and is fast becoming a global star
Wild about Africa: these awesome animal snaps will take your breath away
Next on You
Zandi the black mermaid is teaching kids to overcome their fear of the deep blue sea