Our miracle boy: Vredenburg baby is born with organs outside his body Baby Ephraim was born with exomphalos, a defect of the central abdomen resulting in his intestines and part of his liver developing outside his body in a sealed sack. (PHOTO: Supplied)

This is one brave baby.

Five-month-old Ephraim Maleho from Vredenburg on the West Coast was born with his intestines and half his liver protruding from his body in a translucent “bubble”.

He was diagnosed with exomphalos, a rare condition resulting in a weakness of the baby’s abdominal wall where the umbilical cord joins it. This defect allows contents of the abdomen, mostly the bowel and liver, to protrude outside the body in a loose sac surrounding the umbilical cord.

Ephraim’s parents, Beneline Maleho (27) and Melvory van Wyk (33), first discovered something was amiss with their baby during a routine 13-week scan. After 100 days in the neonatal intensive care unit at Netcare Blaauwberg Hospital, Ephraim is now thriving at home with his big brother Llyle, mother Beneline and father Melvory. (PHOTO: Supplied)

The couple, who both work as yard officials for Transnet, were offered the option of termination but Beneline refused. “I told the doctor no, not at all. I’ll give this child a chance to live.

“Ephraim’s father and I knew there was something special about this child.”

Although doctors were able to diagnose the baby in the womb, they would know how severe the defect was only once Ephraim was born.

Despite the worry, Beneline, who has an older son, Lyle (10), says her pregnancy was quite normal.

“There was no difference from my first pregnancy. I was calm and it went smoothly.” Beneline first discovered that something was wrong with Ephraim during her 13-week ultrasound scan. (PHOTO: Supplied)

But when the time came for her to deliver her baby via C-section, she was nervous.

“I cried from the time I left home until I got to the hospital and while they were prepping me for the C-section,” she says.

Beneline also had to sign a consent form acknowledging that the delivery was high risk.

READ MORE | It's a miracle! Baby Aurora's fight against Covid-19 and a respiratory infection

Dr Ricky Dippenaar, principal neonatologist at Netcare Blaauwberg Hospital, where Ephraim was born, says the boy’s small and large intestines and half his liver were protruding through his abdominal “within this translucent bubble”. 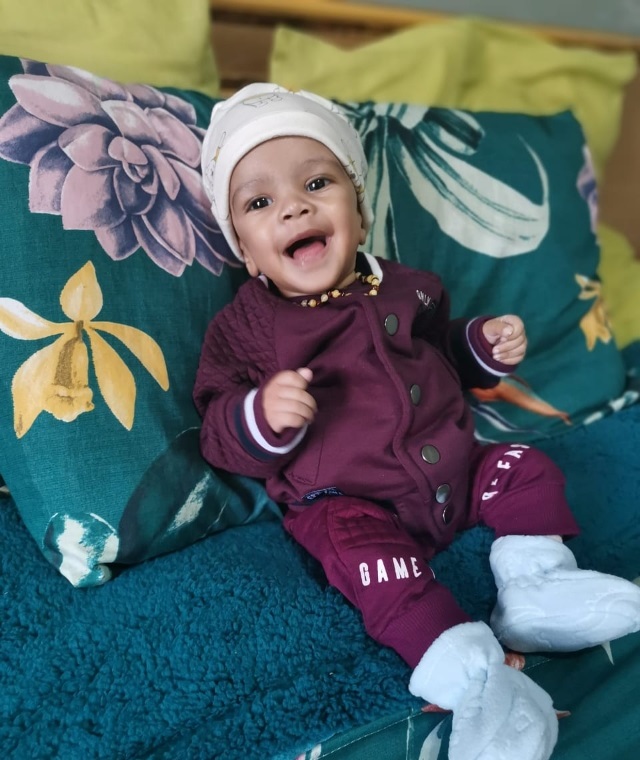 Because his abdominal cavity had not developed yet, doctors had to wait two months before operating to move his organs into their correct position.

“We needed time for the skin to grow to make enough space in his tummy,” Dippenaar says, adding that Ephraim was kept in a carefully controlled environment in the neonatal ICU to prevent infection.

During the birth, Dippenaar also preserved the amniotic sac, the clear, tough membrane formed inside the mother’s uterus that encapsulates the unborn baby and amniotic fluid. This ultimately saved Ephraim’s life.

When the bubble that contained some of his organs started to break down in two areas, which put him at risk of life-threatening septic complications, Dippenaar used the preserved amniotic tissue to reinforce the membrane.

“The amniotic tissue incorporated well, reinforcing the bubble of tissue around Ephraim’s organs, which then underwent a transformation and started contracting.

“Together with the constricting dressing, the bubble reduced dramatically, gently squeezing the organs into his abdomen and allowing Ephraim’s abdominal cavity to expand,” the doctor says.

Specialists were able to fit all Ephraim’s organs safely inside his body during intricate surgery.

“The surgery was interesting and multifaceted but proved to be very feasible and successful. Ephraim showed us what it is to be a little hero,” says Dr Beelke D’hondt, a paediatric surgeon who helped look after the tiny patient.

After spending 100 days in hospital, Ephraim was finally discharged, not a moment too soon for Beneline.

“I was so excited. I was smiling from ear to ear. I couldn’t sleep because I was excited to see my baby,” she says. Ephraim is eating well and growing nicely but his parents have to keep a close eye on him until the muscle and layers under his skin grow. (PHOTO: Supplied)

Because Ephraim was not picking up weight or latching on his bottle, he had to be sent home with a feeding tube. But that quickly changed after a few days at home.

“He’s been drinking his bottle and eating his cereal and he’s gaining weight perfectly like a normal baby,” the delighted mom says.

She and dad Melvory have to keep a close eye on the baby until the muscle and layers under his skin grow.

“He’s not allowed to fall, because it might hurt his liver or other organs. In his case, it’s only his skin covering his organs – the muscle underneath his skin and the fat is still going to develop as he grows, so it’s a bit fragile at the moment,” Beneline says.

Despite the extra care, she says the family are delighted to have their baby home, especially his big brother, Llyle.

“Ephraim is very active and likes babbling a lot. I think he’s going to be a very bubbly boy – he’s very friendly and smiles at everyone.”

We live in a world where facts and fiction get blurred
In times of uncertainty you need journalism you can trust. For only R75 per month, you have access to a world of in-depth analyses, investigative journalism, top opinions and a range of features. Journalism strengthens democracy. Invest in the future today.
Subscribe to News24
Related Links
'I've learnt to adapt': woman's rare skin condition affects her life in every way
Cape Town boy with rare 'popcorn lung' disease finally home after 3-year hospital drama
Mpumalanga woman opens up about her rare eye condition which caused her to be bullied for years
Next on You
Facebook whistleblower Frances Haugen: who she is and why she felt she had to spill the beans