Over the past decade Anicè Kruger has been so busy caring for her child that she forgot to look after herself.

Her daughter, Pippie, was just a toddler when she sustained third-degree burns over 80% of her body after fire-starter gel exploded at a New Year’s Eve family braai in 2011.

Despite the odds stacked against her, Pippie survived but over the years she’s undergone more than 60 operations and at age 12 is still facing major physical challenges. Throughout all this, her mom has been a constant presence.

But Anicè was so busy looking after her daughter that she had little time left for herself. By the end of the day the last thing she felt like doing was exercising.

This inactive life eventually started to take its toll. She had no outlet and would sometimes end up crying because she felt so tired and drained.

Anicè knew that this couldn’t carry on and so when she read about a body transformation challenge, sponsored by sports nutrition and supplement company USN, she felt inspired to give it a go.

And so began an incredible journey which would see her losing 10 kilograms and 10% body fat in just 12 weeks. She recently shared details on Facebook along with some amazing pics of her progress in the contest, which ended in November.

Speaking to us from Western Cape seaside town Stilbaai, Anicè (36) tells us she was originally motivated to sign up for the challenge because she’d read there was prize money involved, which would come in handy for Pippie’s care.

“But when I started the challenge, I realised how weak I’d become in the past few years. I could barely pick Pippie up anymore,” the mom-of-two says, adding that Pippie now weighs nearly 40kg.

The challenge required participants to follow a strict diet and exercise regime for 12 weeks. It was a big lifestyle change for Anicè who hadn’t set foot in a gym for nearly three years.

She says her home has become like a restaurant since she embarked on the USN eating plan. She and her husband, Erwin, also have a 10-year-old son, Arno. “Erwin has his own food and Arno has his own eating habits. And, of course, Pippie has her special diet – and here I was adding my own meals into the mix,” she says, laughing.

She manages to accommodate everyone’s preferences by pre-preparing meals and then just heating them up at mealtimes.

Yes, it was very hard at first, she admits.

“Before I started the challenge, a friend had asked if I didn’t want to go to Pilates with her. I laughed it off because I thought it was boring. But once I discovered how hard it was, I wasn’t laughing anymore,” she recalls.

READ MORE | 'Look, I have two eyes!': prosthetic nose and eye for boy mauled by hyena

“Now, I can easily spend three hours at the gym.”

But there were a few setbacks along the way. Just after she started the challenge, Anicè caught Covid, which had her down for three weeks.

“I think Covid hit me harder emotionally than I knew. I was at the point of giving up and eating burgers and chips just to feel better,” she says.

But she stayed strong and stuck to her diet throughout her Covid battle and as soon as she’d recovered, she headed straight for the gym.

Her family’s support has also inspired her to keep going. Arno joined the gym with his mom. Pippie, who can communicate only with sounds and single words as a result of the brain damage caused by her accident, also tags along to cheer her on. 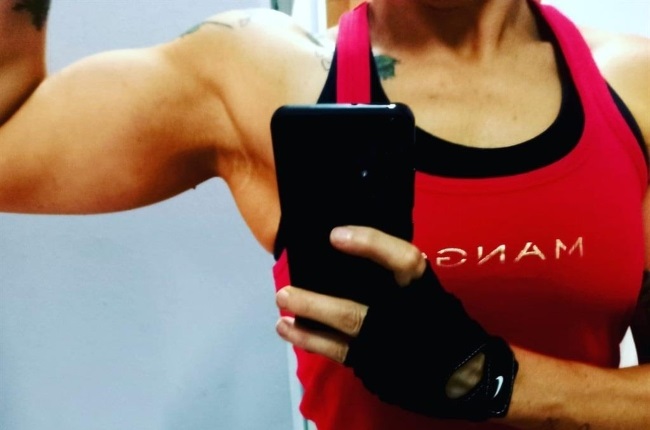 Anicè is proud to be able to show off her muscles now. (PHOTO: supplied)

Although the challenge has ended and the winners still need to be announced, Anicè is planning to continue with the meals and exercise.

It’s a relief to be feeling so much healthier and happier, she says, adding that clearly her kids are also benefiting from the positive way in which the programme affects her.

“Pippie is always a happy child but I’m glad that she doesn’t see me crying in the evenings anymore.”