A solo 1 000km run over 30 days is not for the faint-hearted. But that is exactly what extreme adventurer Gaven Sinclair completed earlier this month after clocking up the kilometres running along the coastline from Gqeberha to Cape Town.

It was all for a good cause, Gaven tells YOU. He partnered with lifestyle programme Syntro-P Wellbeing as an ambassador for their Heel2Heal Challenge, which raises awareness for people living with chronic conditions such as heart disease, diabetes, eating disorders and asthma.

Gaven (48) says the aim of his 1 000-km run was to encourage people to “make that 1mm shift” and take small steps every day towards living a life of health and wellness. Gaven lives with chronic fatigue and has an iron deficiency so he knows what it's like to implement changes to improve your life. He is also dyslexic. 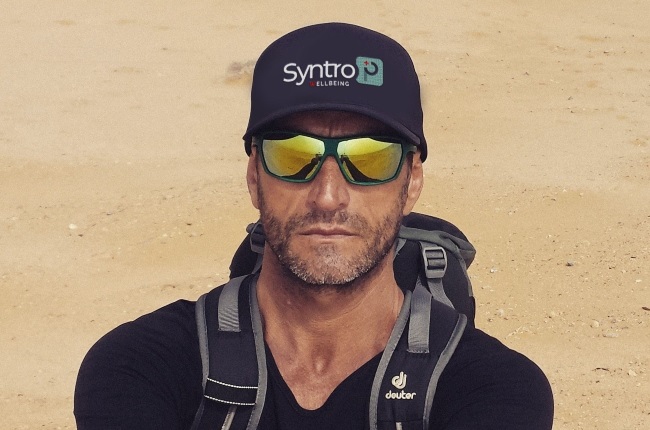 Gaven says through his journey he wants to show people that it is important to get up and get moving. (PHOTO: Supplied)

The journey along the coast was challenging, Gaven admits, and he had to run on the beach and over sharp jagged rock cliff areas as well as along the N2, trails and dirt roads. “Because it was solo and unsupported it means you don’t have people following you. You literally run by yourself, carrying your food, water and whatever else you need on your back. I ran with my backpack that weighed 15kg,” Gaven says.

Other challenges included running out of water and planning logistics every day to ensure he completed each stage in time to get to his accommodation. “I had to pace myself and listen to my body. I developed a few black toenails, had an ankle issue and my back was giving me a bit of difficulty towards the end because of the backpack. Then of course you deal with extreme weather,” he says. Gaven photographed wind turbines as he was running towards Oyster Bay. (PHOTO: Supplied)

But he says it was all worth it because through his journey he wanted to show people how important it is to get up and get moving. “The run was basically to inspire the individual, communities and the nation to make that 1mm shift in their own lives. If you look at the figures, over 60% of us are diagnosed with chronic disease. So the idea is if you are healthy, you are happier,” he says.

This is not the first extreme challenge for Gaven, who is also a life coach and motivational speaker. He took some breathtaking pictures of the countryside along the way. (PHOTO: Supplied)

Over the past six years, the professional extreme endurance adventurer has done five solo and unsupported challenges to raise funds and awareness for various causes. “In 2017 I cycled from Cape to Cairo, in 2018 I ran 4 000km over a few months through four African countries, in 2019 I did an island swim north of Mozambique. And in 2020 I did a 388-km beach run. It was a great honour to complete all these challenges,” Gaven says. He admits running on the beach was tough. (PHOTO: Supplied)

He took some breathtaking pictures during his recent 1 000-km run to document the natural beauty of the land. His trusty backpack on the beach near Cape St Francis. (PHOTO: Supplied)

For Gaven, who has enjoyed an adventurous lifestyle since the age of 20, the best part of extreme challenges is the people he meets along the way. “I get to meet the most amazing, fascinating people who inspire and motivate me and the kindness and humanity out there stand out for me.”

Gaven adds he had “amazing support” along the way and looks forward to future extreme challenges.  “For 2022 I am definitely doing another solo and unsupported challenge, maybe a cycle or a canoe or run on a massive scale.”

To those who want to start a healthier lifestyle, Gaven says the important thing is to take that first step and things will then unfold as they should. “Fall forward in life, not backwards. That is the key.”

We live in a world where facts and fiction get blurred
In times of uncertainty you need journalism you can trust. For only R75 per month, you have access to a world of in-depth analyses, investigative journalism, top opinions and a range of features. Journalism strengthens democracy. Invest in the future today.
Subscribe to News24
Related Links
PICS: Incredible moment disabled athlete water-skis in wheelchair
Meet the paraplegic tri-athlete who does not let his disability slow him down
Inspirational Chris Nikic becomes the first athlete with Down syndrome to finish Ironman race
Next on You
Couple who found the Moti brothers tell of the night of fear and drama