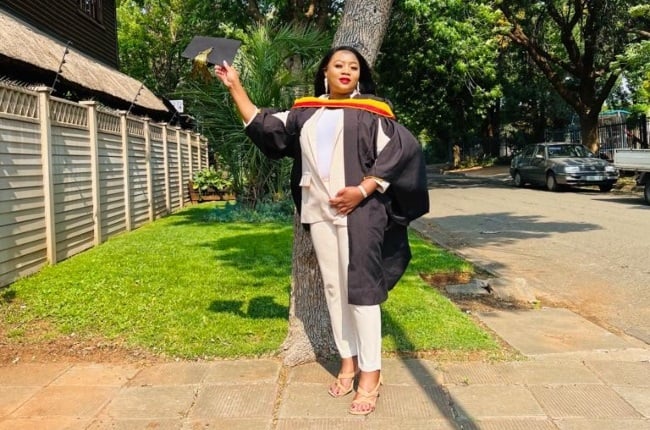 Walking through the wards of the hospital she works at feels unreal to her at times because she grew up poor and never thought she'd be able to afford nursing school.

But Nomandithini Metu (40) has always been a hustler and she's now obtained a Bachelor of Nursing qualification from the University of Fort Hare in the Eastern Cape.

But, boy, did she have plenty obstacles on her path to success.

READ MORE| Matric girl walks 16km every day to get to and from school: 'I do this for my family, especially my grandmother'

Growing up the youngest of six children in Nxamkwana village outside of Mdantsane wasn’t without its challenges.

No one was working at home and when her father passed away when she was just eight years old, she went to live with her maternal grandmother.

“My mother’s side of the family were educated and I grew up with them because my mom couldn’t afford to send us to school,” she says.

Motivated by their lifestyle, she worked hard at school and became one of the top achievers in her class. But Nomandithini missed her family back home and when she was 13 she returned to finish school in her village.

Matriculating in 2001 – the first person in her household to do so – motivated her to keep going.

Growing up she was passionate about helping people and this fueled her desire to become a doctor so she applied to Lilitha College of Nursing – the first of many applications.

“I'd apply every year from 2002, paying the R60 application fee because I didn’t want to give up on that," she recalls.

When she didn't hear back she knew she needed to do something to earn money so she joined her aunt, Nomboniso Zenzile, in her container at the taxi rank, selling meals and fat cakes to customers. She then took a job at a tavern to provide for her son, before pursuing a diploma in marketing management at Lovedale College in 2005, the same year that she got married. She was nicknamed Schweps, after the container she used to work at. (PHOTO: Supplied)

After achieving her qualification she couldn't find employment in the marketing field and began working as a cashier at Shoprite, but in 2010 she lost her job and separated from her husband.

Devastated and feeling lost, Nomandithini returned to the container, where they were now also selling alcohol, to find her feet again.

“Sometimes when you come from a family like mine, you think that certain things are not meant for you and you start to doubt that things will happen,” she admits. “I didn’t believe that I could go to university, I thought that it was meant for people who could afford it.”

Driven by wanting more for her children, she decided to go back to school in 2014 where she pursued a diploma in electrical engineering at Buffalo City College.

She was thrilled when she got a NSFAS bursary to study, but it only covered her tuition.

“I used the money I’d made from the container to transport myself from Mdantsane to town everyday.”

But she soon dropped out after realising that she wasn’t passionate about her field of study. Nomandithini went back to her street vending job to regroup.

“Whenever life knocked me down, I’d go back,” she says.

This time she decided to pursue what she loved no matter what, so she applied to the University of Fort Hare to study towards a degree but she was rejected.

Relentless in her desire to realise her dreams, she applied again.

“I went to the admin staff and asked what the requirements were and why I didn’t qualify but they said I had qualified and advised me to apply again," she says.

Her perseverance paid off when she was accepted and began her first year in nursing studies in 2017.

“That was the worst year ever,” she says. “I was a mother of three now and my youngest was one year and seven months when I started in January that year.”

On top of working at the rank, she began selling clothes for other people and used her commission to cover her taxi fare.

“You’d see me walking with a big bag around campus with the clothes that I was selling," she recalls.

Just when she thought she was finding her feet, doctors diagnosed Nomandithini with uncontrolled hypertension halfway through her first year.

“They said that the left side of my heart was extended."

But she continued working in the container and studying at Fort Hare.

“Some people didn’t even know that I was studying," she says. When she graduated at this year’s spring graduation season at the University of Fort Hare, her mom, Ntombana Bill (80) was proud as punch.

“She was so excited when I graduated, but she couldn’t go to the ceremony because she has asthma and can't travel long distances.”

Nomandithini is currently doing her community service at Cloete Joubert Hospital in Barkley East and continues to make her family proud. She now plans to study further and specialise in HIV.

“Put your eyes on the prize, not on the current situation. That’s what’s always kept me going," she says.