The 2022 FIFA World Cup is a sporting spectacle like no other and there are many people working hard behind the scenes to make it a great experience for fans who've travelled to Qatar.

READ MORE| Fleet of foot and easy on the eye: all the hotties playing in the Qatar World Cup Natasha Petersen is a site logistics coordinator at Lusail Stadium, the biggest stadium in Qatar.(PHOTO: Supplied)

Natasha Petersen has more than 20 years' experience planning, producing and directing activities for large-scale projects and campaigns. The wife and mother of two from Retreat, Cape Town, is the venue logistics manager/site logistics coordinator at Lusail Stadium, the biggest stadium in Qatar, which will host the final game and closing ceremony of the world cup. 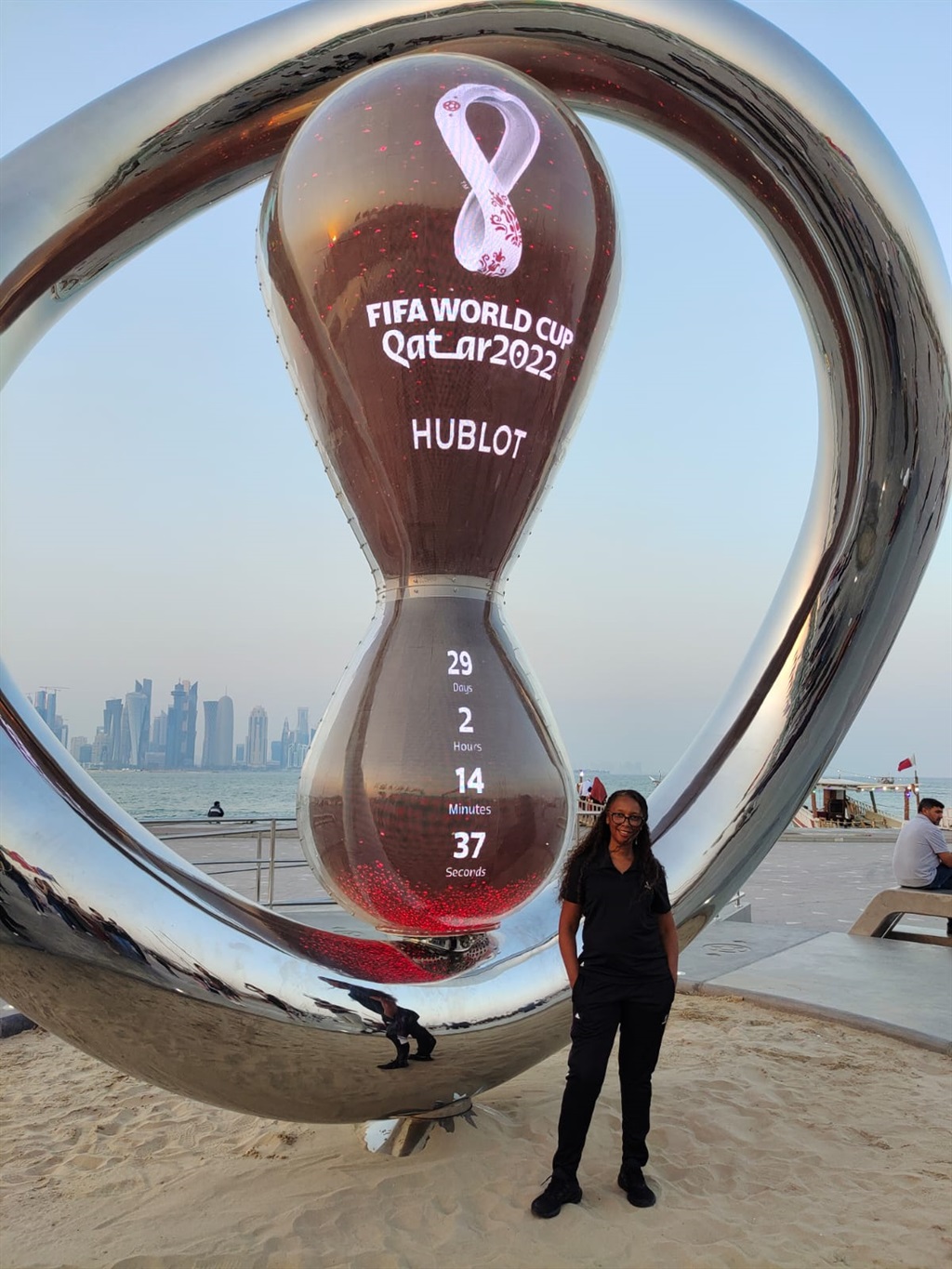 Natasha counting down the days to the start of the 2022 Fifa World Cup. (PHOTO: Supplied)

“My initial reaction, when I am offered opportunities like this, is always remind myself to be grateful that I am being selected out of many people to be a part of these history-making projects,” she says.

She started her job in May this year, and her contract ends in January 2023. Even though she has to spend months away from her loved ones, they remain her biggest supporters, she says.

Her duties at the stadium include venue setup and breakdown of spaces in and around the stadium, getting the operation teams ready, developing an integrated supply chain to ensure an effective operation and managing deliveries to and from the venue.

“The first few days of the tournament had some surprises and drama on the pitch, so I think that we are in for an exciting few weeks of really good football and maybe a few upsets, depending on which team you are backing.”

Nothing, she says, can compare to being right in the thick of the world cup action – sometimes she'll stand on the side of the field and think to herself, “wow, look how far you've come!”

Natasha says she'll be watching some games at the other stadiums and she'll explore the fan zones.

“I’ve realised over the years that you have to allow yourself the space and time to enjoy the moment and soak it all in.” 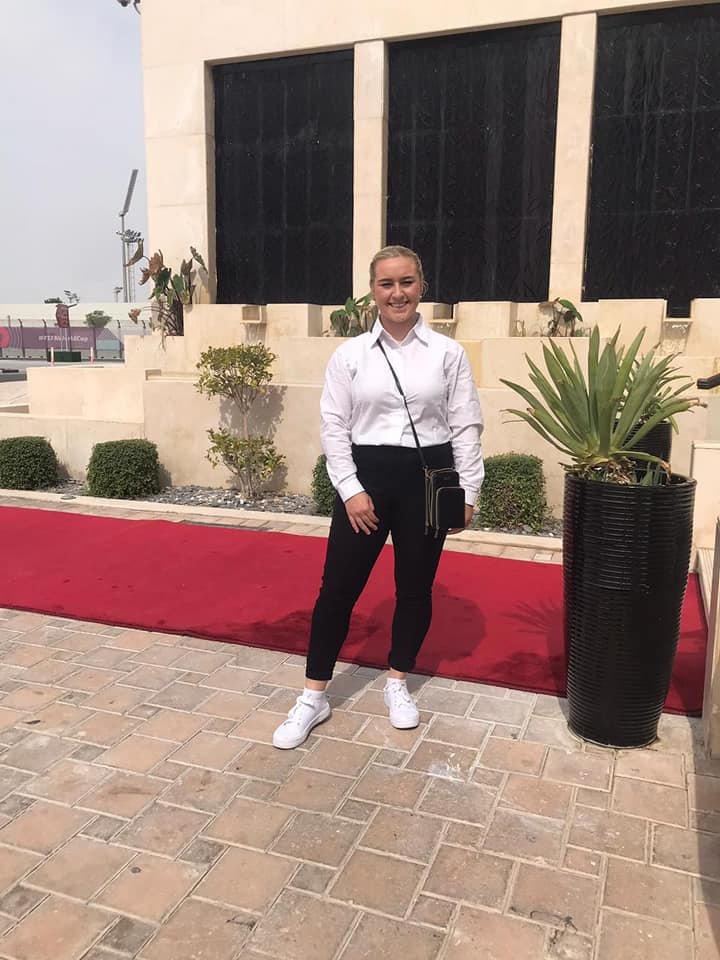 Tayla-Jade Marais is a commis chef working in the private suites at the stadiums in Qatar. (PHOTO: Blue Ribbon Chef School/ Facebook)

Culinary student Tayla-Jade Marais, from East London, is working as a chef in the stadiums' private suites in Qatar.

She serves and prepares food for guests, who include A-listers and royalty. Burgers and meatballs made for the guests in the world cup private suites. (PHOTO: Supplied) She has been in Qatar since October.

“My experience has been amazing, but also very tough, overwhelming and emotional. The culture is extremely strict and has a lot of rules which we South Africans have respected since we arrived.”

Serving David Beckham has been the highlight of her experience so far.

“It was an absolute pleasure meeting and serving him. He showed his appreciation of our service,” she says, adding that she got to take a photo with him too.

In her free time, she watches the matches.

“Even for someone who's not that interested in soccer, watching the games live is next level.”

Lufthansa Johnson from Alberton in Gauteng, has lived in Doha since 2017, and works as a soft services manager at a facilities management and maintenance company.

She is part of the world cup volunteers programme, which she says has "given me the opportunity to be involved in the journey as well as meet and interact with people from all walks of life. I am delighted to have time with my family and friends to enjoy a few matches and the fan festivals during this period". Lufthansa is part of the spectators services team that manages the pedestrian access gates, queue management and seating inside the stadiums.

She works shifts during the tournament at the Ahmed bin Ali Stadium.

“Shifts are a total eight-hour shift, including a 45-minute lunch break and shorter rest breaks in between,” she explains.

Her family is living with her in Qatar, and she travels to SA three times a year to visit her other loved ones. Odwa Memeza is a commis chef and a musician. (PHOTO: Supplied)

Odwa, who is from Mthatha in the Eastern Cape, is completing his diploma in culinary arts and working in Qatar as a chef.

He was interviewed for the job by international chef Ralph Gottschalk and a few months later he was on a plane to Doha, his first time travelling on a plane.

“We didn't only get to experience what Qatar and its locals had to offer but also a plethora of other cultures and languages, because many other people from all over the world had been flown in to help make this world cup a success,” he says.

“I often feel like I'm in a movie because of all the different accents I hear and the interesting conversations I hear on a day to day.”

The work is tough – "I've had two days off since my arrival, working Monday straight till Sunday." – But he enjoys it.

The experience has affirmed his love for being in the kitchen because he’d much rather make sure that his kitchen is ready for service than go out and watch the games. Some of the food Odwa is serving up in the private suites. (PHOTO: Supplied)

Working in the private suites, he’s had the chance to serve many high-fliers, but one experience that stands out is serving a king in a private suite.

“One of his aides offered us a cup of some of his royal tea and I have to say, that was a highlight.

“Easily the best tea I've ever had. They literally hire people to be their tea holders and not just one guy, there are usually at least three guys walking around with golden teapots.”

Odwa loves that he's making five-star meals in five-star kitchens with world-class chefs but he admits he can’t wait to get home.

“The locals say the climate we've been experiencing here is winter climate, yet you wouldn't believe how hot it gets. So, if you're South African and you're not a fan of winter, come to Qatar.”

We live in a world where facts and fiction get blurred
In times of uncertainty you need journalism you can trust. For 14 free days, you can have access to a world of in-depth analyses, investigative journalism, top opinions and a range of features. Journalism strengthens democracy. Invest in the future today. Thereafter you will be billed R75 per month. You can cancel anytime and if you cancel within 14 days you won't be billed.
Subscribe to News24
Next on You
Can Siya and the Boks do it again? Experts weigh in on whether the Rugby World Cup can be ours this year