Jack Tilling died after being diagnosed with a rare disease when he was a baby. (Photo: Supplied)

Jack Tilling was only eight when his life came to an end, but he was a hero, say his family and schoolfriends.

The Grade 1 pupil who died recently, suffered from a rare disease, urea cycle disorders (UCD), which causes a build-up of toxic ammonia in the blood.

When their son was declared brain dead, his heart-broken parents agreed that he could be an organ donor.

Jack's classmates at Eversdal Primary School in Durbanville, Cape Town, paid tribute to their classmate's heroism with a Superhero Day at school, which saw them all dressing up as their favourite characters to celebrate Jack's life.

"I cried when I heard about the Superhero Day," Jack's mom, Alison, says.

"Jack's favourite superhero was Spider-Man. He called himself Stomach-Man, because he had a big tummy, and he'd run around the house with a cape."

Jack's rare condition put his immune system under tremendous strain throughout his short life, and he was in and out of hospital for about a week almost every month for the first five years of his life.

"But besides that, he was a healthy little boy," Alison says. "We treated him like a normal boy."

Alison had a normal pregnancy and Jack appeared perfectly healthy when he was born, but three days later he was in a coma.

"We were still in the hospital and he was about to be discharged," Alison recalls.

It was a scary time after his initial diagnosis, she adds. She knew very little about his condition, and not many doctors did either.

"Desperate for information, I contacted doctors and found a professor in Japan to guide us," she says.

"We had to teach our family and friends what foods Jack could and couldn't eat, and what could happen if he had protein – his body would basically shut down, which could lead to brain damage and death."

He was diagnosed at age four, and because his parents' medical aid didn't cover all the treatment costs, the hospital and medicine bills quickly piled up.

"In the beginning, we spent R10 000 every other week on his medicine, but luckily my husband, Karl, was in a position to pay for it," Alison says.

"Now I want to establish an NGO to help other children who won't be able to afford the medication, and do more research on the condition."

Jack got the flu a few weeks ago, and had to be admitted to hospital. On 1 August, he was declared brain dead.

Alison and Karl spoke to Jack's older brother, Ross (12) about their decision to let Jack be an organ donor.

"Ross wanted to know if they could transplant a brain into his little brother, and I told him that, unfortunately, it doesn't work that way. But when I told him Jack's organs would help others live a normal life, he said, yes, we should donate Jack's organs because that's what his brother would've wanted – to help other people."

On the day of the procedure, Alison put Jack's favourite teddy bear next to him and she read to him from his favourite book, The Gruffalo by Julia Donaldson.

READ MORE | Race against time: these kids are in desperate need of a bone marrow transplant

"We sat with him for three hours; we told him we love him and how proud we're of him."

When the medical team came to take Jack into the operating theatre, staff gave him a hero's salute as he was wheeled through the corridors.

"It was very emotional," Alison says.

Jack's kidneys and corneas were donated to three different people. 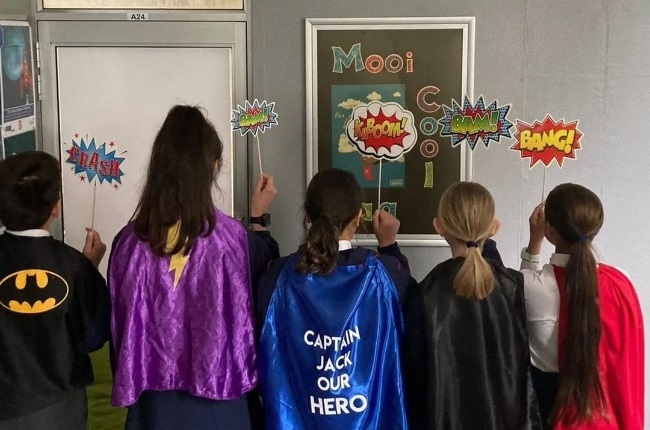 All the pupils at Eversdal Primary School in Durbanville dressed up as superheroes to celebrate Jack's short life and the lives he saved by being an organ donor. (Photo: Supplied)

Alison is incredibly grateful for the love and support the family has received on social media after Jack's passing.

"And it's all because of Jack and the kind of boy he was and the impression he left. He enjoyed every moment of his life. He loved unconditionally. He crawled into everyone's heart."

Jack and Ross were inseparable and his big brother misses him every day, she adds.

She and Karl are taking life one day at a time now, she says.

“We take solace in the fact that Jack had a good life of eight years. My husband and I are crying together and we can't wait to see him again one day."