Nadine Abrahams was surprised by boyfriend Martin Martinus when he went all out to propose to her by hiring actors to recreate her favourite film. (Photo: Supplied)

Wedding proposals are kind of a big deal and these days the pressure is on to go bigger, bolder and more creative than ever.

It can be daunting – ask anyone who’s ever planned to pop the question. Sometimes, however, the circumstances surrounding a proposal are a no-brainer. So Martin Marthinus of Eerste River in Cape Town was lucky – because when someone loves something as much as his sweetheart does, you have your theme right there.

All Martin (32) had to do was set the scene – and boy, did he ever take things to the next level. 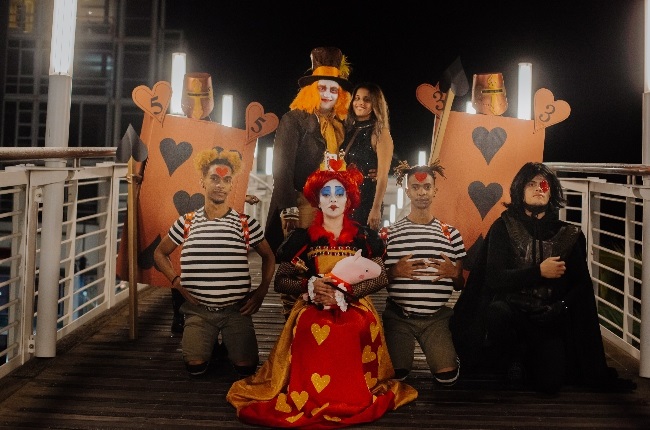 Nadine’s Alice in Wonderland-themed day was a super-sized surprise – and the bride-to-be said yes! (Photo: Supplied)

The love of his life, Grade 3 teacher Nadine Abrahams (26) of Ottery in Cape Town’s Southern Suburbs, loves all things to do with Alice's Adventures in Wonderland and Disney’s Alice in Wonderland is her favourite film.

So Martin arranged a perfect scene at the Sorbet beauty salon at Cape Town’s V&A Waterfront, complete with all the characters from the Lewis Carroll classic.

It took a lot of planning and R75 000, excluding the cost of the sparkling diamond engagement ring, for Martin, a financial adviser, to set up his Wonderland proposal.

He booked the whole salon for a pamper session for Nadine, her sister, Tarnia (20), and cousin Cheslyn Davadoss (30), and told them he’d won a voucher at work to spoil them.

The salon’s social media manager arrived and asked Nadine if she’d mind slipping into a glitzy evening dress and pose for photos. The dress was one Martin had had specially made by a designer in Joburg – because he knew Nadine’s heartfelt wish was that, if she ever got engaged, her hair and nails needed to be done and she had to wear a beautiful dress. In his guise as the Mad Hatter, Martin asked Nadine to share the rest of her life with him. (Photo: Supplied)

Martin planned the elaborate engagement with a company of actors and an events management company in just six weeks, surprising even his family with his creativity.

When Nadine was all dressed in her sparkly outfit, the action began and a cast of Wonderland characters stepped into place.

“You look absolutely enchanting,” the Red Queen told a startled Nadine, who was soon joined by Tweedledum and Tweedledee, The Prince and a familiar-looking Mad Hatter – her boyfriend.

Martin, escorted in by the Queen of Hearts’ playing-card soldiers, looked a little uneasy but he pressed on and dropped down to one knee. “I would never be able to tell you how much I love you,” he said. “I would like to show you how much, for the rest of our lives.”

The whole scene was filmed by the social media manager and it didn’t take long for the video to go viral after it was posted on the internet. And there was more to come. Soon after the proposal Nadine’s phone rang and it was her favourite South African musician, The Kiffness, calling to congratulate her.

Then it was onto the luxurious Table Bay Hotel at the Waterfront where a Mad Hatter’s tea party had been arranged for them.

“I couldn’t believe my eyes,” Nadine says. “I’m the one who believes in the fairy tales and fantasies I read to my class at school. He’s a guy for figures.”

The couple haven’t set a date yet but they’re hoping to have their big day towards the end of the year or early in 2022.

The theme will be “something Disney, of course”, says Nadine. Except this time, Martin will be her Prince Charming.