This Cape Town teacher is determined to make a difference at his struggling school: ‘You can’t teach starving children’ Dillon Henwood is changing the course of his school one good deed at a time. (Photo: Supplied)

He was the one meant to be doing the teaching but it was his learners who taught him a lesson he’ll never forget: that his job is about far more than just being in the classroom. Horrified at the daily hardships his students faced, Dillon Henwood decided to take matters into his own hands to help them – with incredible results.

When he was offered a job at the school, Dillon turned it down at first. Driving to the interview alone was enough to give him cold feet about teaching at Elnor Primary School in Elsies River, Cape Town.

“My GPS directed me through all the dangerous parts of the area,” Dillon recalls. “Gangsters in the street threw beer bottles at my car. To say it was a shock to my system would be an understatement.

“Everything was so dilapidated and timeworn. I knew that poverty stricken areas existed, but I’d never experienced it first hand at such an extreme level.”

Out of concern for his safety, he turned down the opportunity to become a teacher at the school. But he was soon filled with guilt.

Days later he reapplied for the post and today he’s glad he did. Since joining the school in January 2019, Dillon’s life has been enriched by seeing the difference he’s able to make in his learners’ lives. Dillon cleans a field at the school. (Photo: Supplied)

Within the past two years the 25-year-old has served nearly 78 000 meals, donated uniforms and stationery and has started a psychological support programme at the school.

“Considering the many social ills within the community such as violence and child and substance abuse, we’ve brought in two social workers and a counsellor to work with some of the kids.

“Addressing social needs is also important to me as these factors greatly affect a child on a personal level and hamper their ability to learn.”

Ensuring his students receive the best education possible is something Dillon is passionate about.

It all started when an 11-year-old pupil stole money from Dillon’s wallet and a few of the other kids’ lunches.

As punishment, the boy had to sit in Dillon’s classroom for detention. But instead of scolding the boy, he calmly asked him what he needed the money for.

“He told me there was no food at home for him and his younger brother,” Dillon recalls.

“He later explained that his parents had abandoned them three years prior to the incident and he’d been fending for himself ever since.

“He built a shack in someone’s backyard and lives there with his little brother.”

Dillon told the young boy he’d provide food for him and his sibling if he promised to stop stealing from others.

“It was only when I visited his home to deliver food parcels that I truly realised the extent of the destitution in this community.

“No toilet, shower, kitchen, bed or cupboards. . . nothing. Just a worn gym mat on the floor, which served as a bed, drenched in water from past rainfall.”

I knew that poverty stricken areas existed, but I’d never experienced it first hand at such an extreme level.
Dillon Henwood

Dillon knew he had to do something, so he and a friend, Stacy Francis, raised funds on social media to serve 400 meals at the school every day.

Since 2019, they’ve served thousands of meals, even feeding kids during school holidays.

In addition, two years ago he started the Dignity Programme, which serves to provide learners with basic needs such as toilet paper for the school, sanitary products for female students, and uniforms and stationery for those in need.

When donations dry up, teachers usually chip in from their own salaries, Dillon says.

“Considering teachers spend so much time with their learners, it’s natural to develop close relationships with them.

“Eventually they start to feel like your own children who you’d go to the ends of the earth for.”

His next aim is to build a fence around the sports field. The field has become a breeding ground for illegal dumping and has caused nearby classrooms to become infested with fleas and rodents.

“Our learners can’t play sports because the community dumps building rubble, animal carcasses and other general waste on the field.

“It’s also not safe for learners to play there as gangsters have access to the field.”

Their aim is to convert half the field into a food garden to make the feeding scheme more self-sufficient. 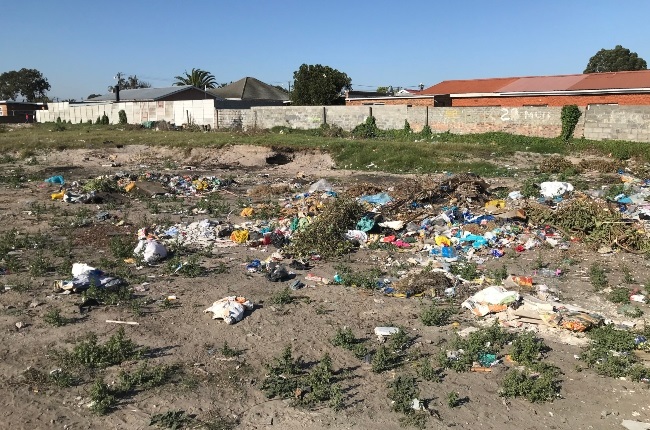 The field has become a breeding ground for illegal dumping. (Photo: Supplied)

Dillon hopes to raise R250 000 by campaigning on his social media pages and is approaching companies for donations.

His goal is to raise the necessary funds before the end of year so the fence can be installed by December.

It’s the biggest project he’s taken on so far, but Dillon is determined to see it through.

“The children inspire me to continue running these projects,” he says.

“When you truly take the time to understand exactly what these children’s lives entail and the struggles they have to endure on a daily basis, you’ll understand why I can’t turn my back on them.”

It also helps that his colleagues are so supportive. “They sacrifice their school holidays to assist at the holiday feeding scheme, they promote all the fundraising initiatives, and they make contributions out of their own pockets on a regular basis.”

Elnor Primary School is the first school he’s taught at since qualifying as a teacher and Dillon says the experience has taught him that sometimes teaching is about more than just being in the classroom.

“What child would care about adjectives and verbs when hunger pains gnaw at their stomach?

“It’s of utmost importance to me that our learners are well fed. We can’t teach starving children.”

We live in a world where facts and fiction get blurred
In times of uncertainty you need journalism you can trust. For only R75 per month, you have access to a world of in-depth analyses, investigative journalism, top opinions and a range of features. Journalism strengthens democracy. Invest in the future today.
Subscribe to News24
Related Links
Desperate Eastern Cape residents are resorting to eating grass to survive
Struggling Cape Town school won’t let lockdown cause them to close their doors
SA teacher talks about coronavirus measures in South Korea
Next on You
This Mrs South Africa finalist is proud of her 11 kids and calls them her reason to succeed