This Cape Town woman has a three-year-old and still manages to keep 450 house plants alive! 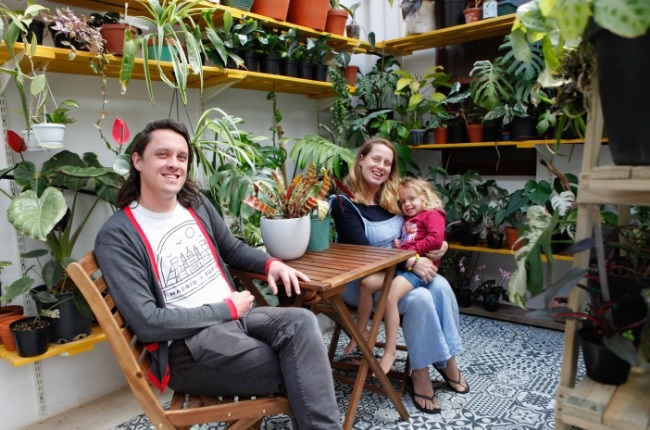 She’s known as the plant guru in her community and it’s not hard to see why: Saffron de la Rouviere has hundreds of plants in her home.

“It’s worse than Pokémon because you can’t catch them all but you still want to try,” she says, laughing.

Green-fingered Saffron lives in Hout Bay, Cape Town, with her husband, Neil, and their three-year-old, Rose. There’s another baby on the way too but nothing, not even hectic motherhood, can get in the way of tending the flourishing fronds, lacy leaves and sturdy stems of her indoor jungle.

“I stopped counting at 450,” she says of her huge collection.

Saffron agrees with the organisers of Garden Day, which was celebrated on 17 October: after cooking and baking, gardening has been the most popular lockdown hobby. Since the pandemic struck last year, creating green spaces indoors has become a significant trend.

READ MORE | 'I never thought I had it in me to fix dolls': meet the Gauteng woman who has restored over 400 dolls

“So many people started collecting indoor plants, especially during lockdown when we all had to stay home,” she says.

“The benefits of indoor plants come from bringing nature indoors – being closer to nature, especially in the concrete jungle many of us live in. And being able to see something grow that you put work into can be very rewarding.” After studying Chinese at Stellenbosch University, she and Neil, a web developer and linguist, spent a year in Taiwan. The tiny apartment they shared sparked her interest in indoor plants.

“But it was especially in 2017 during the Cape drought, when you couldn’t really have outdoor plants as you couldn’t keep them alive, that indoor plants became a sanctuary to me,” she says. “I realised how nice it was to be in a space with lots of green, so I started collecting more and more.”

Her collection started with a single plant: a delicious monster which is still thriving in the corner of the dining room.

“When I got it, it literally had one leaf. And I almost killed it twice – one of biggest problems for plant parents is when they repot their plants and roots get damaged. But it’s still going strong today.”

The stairway near the front door of her house was further inspiration to make plants part of her home decor aesthetic. The steps and banister are practically covered in pot plants, hanging plants, succulents and creepers.

Throughout the house, plants are part of the decor, from the living room to the bedroom, where the headboard is adorned with plants. In the bathroom, there’s a wide variety of ferns, including Davallia fejeensis (rabbit’s foot fern) and Asparagus densiflorus (asparagus fern); as well as Pilea peperomioides (Chinese money plants), which symbolise happiness, friendship and prosperity.

Saffron has another 150 or so plants in her adjacent greenhouse – a modified courtyard. It’s the only place in her home where the plants are watered via an automatic sprinkler system.

The covered patio is also a paradise of plants, including Platycerium (staghorn ferns), which in nature grows from moss or tree stumps and gets its moisture and minerals from the atmosphere. There are also Haworthia truncata (horse’s teeth succulents), from Calitzdorp in the Little Karoo.

Saffron gets her plants from far and wide. “As you become part of the indoor-plant community and learn more about plants, you hear about people in SA who are growers and collectors of these rare plants,” she says.

“Social media also helped a lot. I started a plant-swop initiative in 2018 and ended up meeting a lot of like-minded plant people.”

There’s also quite a fair amount of money involved in this hobby, Saffron adds. “You’d never think it, but that variegated Monstera is worth about R6 000,” she says, pointing at the delicious monster with the dappled leaves. 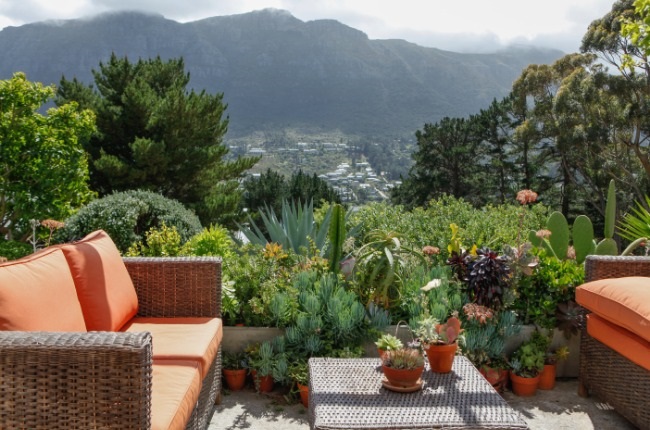 In her luscious back garden. Saffron loves her outside plants just as much as her indoor plants. (PHOTO: Ziyaad Douglas)

Plant enthusiasts like her will sometimes recover some of the cost of an expensive plant by propagating it.

“I’ve made an investment in variegated Monsteras, for example, and through selling cuttings I’ve paid off that investment.”

When she and her friends in the plant community had to stop gathering to swop plants during the pandemic, she started Saffron’s Garden Plant Club, an online plant club where a surprise package with a plant and a gardening accessory is delivered to members monthly.

“The plant community is mostly very kind and caring, and you’ll have loads of people giving you advice, talking your ear off about what you need to do,” she says, smiling.

Saffron says caring for her plants is quite manageable. “It takes me about an hour and a half to two hours a week, and that’s general plant maintenance, including watering.”

In fact, one of the most common mistakes people make with pot plants is overwatering. “You have to think first whether a plant needs water, feel the soil, check its leaves for bugs and disease.

“In winter, some plants can go without water for three weeks because their soil locks in water and there’s very little evaporation.”

The right soil is also essential. “Most indoor plants like good drainage so your soil must be chunky, light and aerated so that water runs through it to the bottom,” she explains.

“A good trick if your soil is quite dense is to take a chopstick and poke the soil to aerate it so the water and oxygen move more freely.”

It’s tough for Saffron to pick just one favourite among her many plants. The variegated Monstera is high on the list, and another favourite is the SA succulent Dioscorea elephantipes, aka elephant’s foot. The complex metamorphosis of the plant’s root system and shoots over the seasons are fascinating, she says.

“There are so many fascinating options. Once you start collecting, there’s no limit.”

Saffron has the following advice for beginners:

We live in a world where facts and fiction get blurred
In times of uncertainty you need journalism you can trust. For only R75 per month, you have access to a world of in-depth analyses, investigative journalism, top opinions and a range of features. Journalism strengthens democracy. Invest in the future today.
Subscribe to News24
Next on You
New Johannesburg mayor Mpho Malatse on being a single mom, solving problems and making a real difference