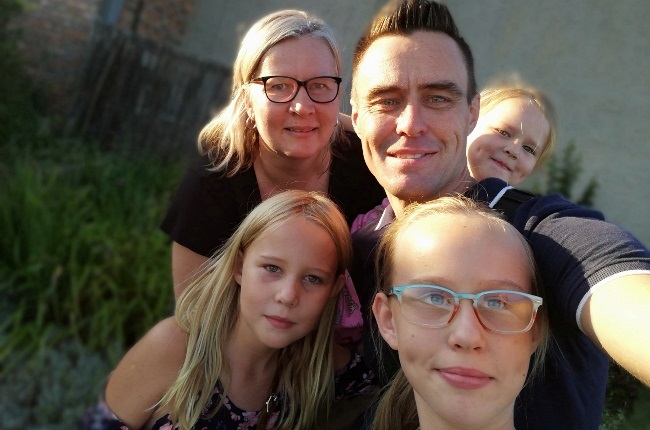 The colourful messages – first in chalk on a child’s chalkboard on an easel, and sometimes on sheets of brightly illustrated paper – quickly caught the eyes of walkers and joggers, relieved to be allowed out after weeks cooped up indoors during lockdown.

The signs, which change daily, have included a hand-drawn picture of Dory, the cartoon fish from Finding Nemo and Finding Dory, with the words, “Just keep swimming”, while others feature quotes from figures as diverse as artist Frida Kahlo, Princess Poppy from the Trolls movies, Nelson Mandela and Winnie the Pooh.

They’re all the work of the Van Vuuren family in Vanderbijlpark, and they began in May last year, as many of us were ready to climb the walls after weeks in lockdown.

Like the rest of us, the family needed to do something to take their minds off the Covid-19 pandemic.

Instead of baking or making TikTok videos, Ellouise Van Vuuren; her husband Niel; and daughters Lexie (12), Lilly (10) and Lucy (5) decided to put up signs with encouraging quotes outside their home in their quiet neighbourhood as people were permitted to be outdoors again to exercise.

“It was my idea to start the signs. As a family we were starting to feel isolated as we have taken the lockdown quite serious and had no people over at our house. And we also didn’t go anywhere,” Ellouise tells YOU. All the signs are hand-drawn and the family has made about 120 signs so far. (Photo: Supplied)

Ellouise, a social worker who co-manages an NPO, The Grace Factory, says as parents they were anxious about what was happening, and the initiative was like a therapy session for the family, where they could discuss their worries while making the signs.

“We didn’t want to keep feeding negative energy either. So, we had to create ways to deal with everything happening in the world,” she says.

They wanted to convey the message that “we are all in this together, that we need each other, and that kind acts are super easy to do”, she adds.

The colourful hand-drawn signs bear messages like, “You matter so much” and “Donut worry everything will be OK”.

“Making bright, positive signs and scrolling through many positive quotes lifted our spirits a bit. Spending time on the signs helped us in mindfulness, it created a time where we could be fully present,” she says.

The mom-of-three could see her daughters getting a confidence boost. “We drew every sign by hand. When they saw how great their signs were, they pushed their limits a bit and created some pretty beautiful and encouraging signs.”

Ellouise was worried that people might not notice the signs, or be encouraged by them, until they found a letter from a neighbour thanking them for the signs.

“They told us they started making our road a part of their daily walking/running routine as the signs just made their days a little bit better,” she says. They have made about 120 signs so far.

“This is just a weekly encouragement for people who so happen to walk past our house.  But how fantastic would it be if we all make colourful and encouraging signs and put them across South Africa?”

Ellouise and her daughters have also set up a website called TheKindnessRevolution which they hope will encourage people to be kind to themselves, to others and our planet.

“As a family we value time together. We believe without a doubt that every human has a responsibility to make their world around them a little brighter and kinder.”

We live in a world where facts and fiction get blurred
In times of uncertainty you need journalism you can trust. For only R75 per month, you have access to a world of in-depth analyses, investigative journalism, top opinions and a range of features. Journalism strengthens democracy. Invest in the future today.
Subscribe to News24
Next on You
She's nearly a teenager! Pippie Kruger's mom on her development and needing more surgery