This is for you, my boy: Cape Town mom wants to finish matric to honour her late son 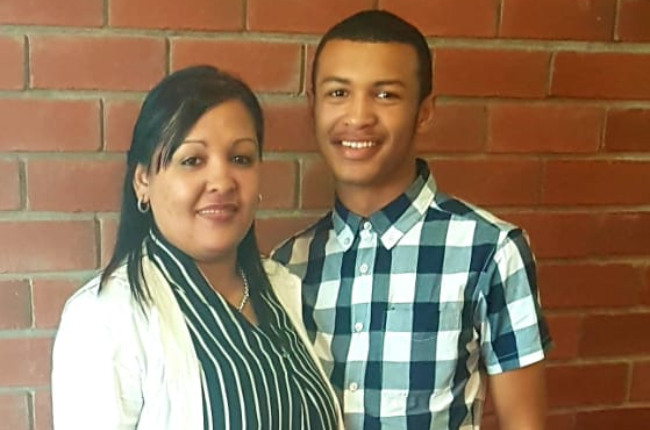 He might be gone but his spirit lives on as Tania finds solace in the promise she made to her late son, Jaden. (Image: Supplied)

A single mother from Delft in Cape Town has vowed to finish her own matric to pay homage to her son who would’ve been writing his final exams right now.

Tragically, Jaden died in February at the age of 17 after developing a severe respiratory infection. But his death can’t be in vain, Tania Februarie says – which is why she is doing this to honour her beloved son.

Tania was in matric when she gave birth to Jaden and had to put her schooling on hold to take care of her baby. However, she remained hopeful that she would return to the classroom and get her matric certificate one day.

“Being a single parent, your main focus is to provide for your children first,” she says. “But it was always at the back of my mind to go back and finish school.”

When Jaden prepared to start his matric year at Belhar High School in January, Tania saw it as the perfect opportunity to finish her studies.

It would also motivate her son to do well, she figured, and she had visions of them finishing school together.

“He was very excited about it, knowing that his mom was going to do matric with him,” she recalls. For Jaden's 18th birthday on 22 August, Tania and her family had a memorial photo shoot in celebration of his life. (Photo: Supplied)

Tania, an admin clerk, enrolled at a private institution and juggled her job, her studies and her responsibilities as a parent. Tania also has a five-year-old daughter, Tayla.Then the unthinkable happened. Jaden started feel unwell at the end of January.

“He was complaining about headaches and called me from school and asked me to send someone to collect him. I was at work so I asked my mom to take him to the doctor, who treated him for flu.

“He still wasn’t better by the weekend and on Saturday evening he could hardly get out of bed. The next day I took him back to the doctor who said he had a respiratory infection and gave him medication."

“On Monday morning Jaden told me he couldn't breathe and I called an ambulance. We were taken to the day hospital where he was given oxygen and then taken to Eerste River Hospital. Jaden's heart was beating too fast, the doctor said, and they transported him to Tygerberg Hospital where he was put on a ventilator.”

At that stage, she thought he would get better – even the doctors said he should recover as he was an otherwise healthy boy. But then his organs started failing and on the Wednesday doctors told her it was time to say goodbye. He died the next day.

“It was terrible,” Tania says. “We were so shocked and confused. His death is still very fresh. There’s nothing worse than losing a child – it hurts so much."

“I pray a lot now and people have been great, sending me a lot of positive messages and condolences. God and my community are helping me get through this.”

Despite her grief, she is determined to carry on and write her final exams.

“I’m doing this for him. It’s hectic because I have to care for my daughter, go to work and still study but I will do this. I want to do this for Jaden – he was only 19 years old but he touched a lot of people. He has inspired me to be a better person.” Tania Februarie handed over a floating trophy to history teacher, Carol Cyster to annually award the top student in her class. (Photo: Supplied)

Tania has also made sure her son’s high school never forgets him and has donated a trophy in Jaden’s name to be awarded to the top history student each year.

History was his favourite subject and it seemed a fitting tradition to start. Tania had the honour of presenting the award to the best history student at the school’s prizegiving ceremony recently.

“It was a privilege,” she says.

“Jaden delivered excellent work and had a real love of history."

“Teachers and learners alike were fond of him. He had a great personality and knew how to balance his life by socialising with friends and being a good student. When he passed away, we had to get counsellors for learners and teachers because he had had such a huge impact.”

Come January – a year after her boy’s passing – Tania hopes to have something else to remember him by: her matric certificate, a sign that he inspired her to reach greater heights

We live in a world where facts and fiction get blurred
In times of uncertainty you need journalism you can trust. For 14 free days, you can have access to a world of in-depth analyses, investigative journalism, top opinions and a range of features. Journalism strengthens democracy. Invest in the future today. Thereafter you will be billed R75 per month. You can cancel anytime and if you cancel within 14 days you won't be billed.
Subscribe to News24
Next on You
Cape Town girl is the only one of a set of triplets to survive – and now she’s started Grade 1