Mondelea Bezuidenhout and her family are finally able to reside permanently in New Zealand. (PHOTO: Supplied)

A South African woman was told she was too fat to live in New Zealand can finally put down roots there with her family after losing 30 kilograms.

Mondelea Bezuidenhout (35) immigrated to New Zealand from Gqeberha with her husband, Donovan (34), and kids Donna (10) and Damien (4) in 2018. But not long after they arrived, she found herself facing deportation after an immigration medical assessment determined her body mass index (BMI) put her in a “severe-risk” category.

“I was absolutely devastated,” Mondelea told YOU from her home in Palmerston North in New Zealand last year. “This was all in my hands and it made me feel horrible, to be honest. Some nights I felt like I just didn’t want to be here anymore. It was a dark time.” 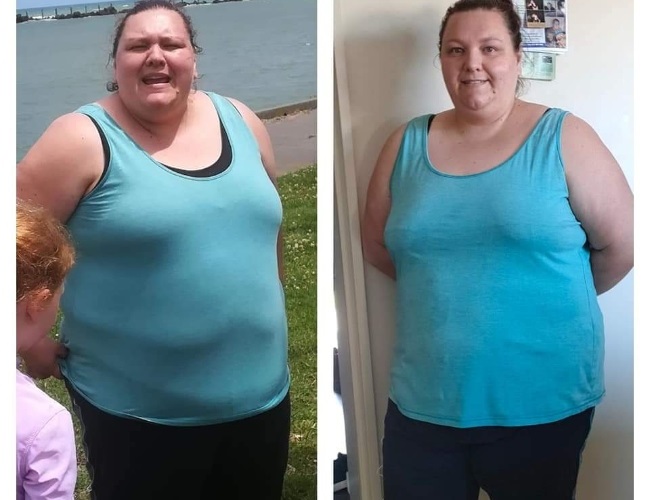 The mom of two has lost almost 30kg. (PHOTO: Supplied)

After an appeal process that took nearly two years, Mondelea has managed to have the government’s decision overturned and will now become a permanent resident of New Zealand along with her family.

“I can’t believe it, honestly – it’s still sinking in. I was crying,” an emotional Mondelea tells us. “The whole appeal process was nerve wracking because we didn’t know what could’ve happened. It could’ve gone either way.”

The relieved mom, who has lost a total of 30kg, received the good news just days before Christmas.

Associate minister of immigration Phil Twyford and an immigration officer granted the Bezuidenhout family resident visas without conditions after acknowledging Mondelea was doing everything in her power to lose weight, including going down almost 10 BMI points.

"The immigration officer applauded me for losing as much weight as I had. I read the [visa] report and had to stop because tears were pouring out of my eyes. Someone could actually see my side of things, this wasn’t just their [New Zealand government’s] side,” she said.

Mondelea, who only went public with the news this month, says her family is ecstatic. “It’s a huge weight off our shoulders.”

The Bezuidenhout family immigrated to New Zealand after Donovan, who’s a high-voltage electrician, was offered a job there.

When the couple applied for their work visas, Mondelea weighed 150kg. Their visa application made no mention of BMI requirements, she says. “Their immigration website just says you must be in good health.”

After spending more than a year living and working in New Zealand, Mondelea and Donovan decided to apply for permanent residency.

Six months after applying, an immigration officer contacted them, asking for basic information such as proof of their relationship, proof of their joint banking account, and proof they live in the same home.

“We only heard back from them on 18 May 2020,” she says. “Then they asked for a report from my doctor, but they didn’t say anything about my BMI.” Mondelea works out every day and follows a strict diet plan. (PHOTO: Supplied)

Mondelea, who works as a customer service representative for a government agency, submitted her health information, including her weight.

She then heard back from the immigration officer, who said she had three months to make certain lifestyle changes and reduce her weight.

She adds that she already was on a weight-loss journey before receiving the news. “I’ve always eaten quite healthily. A lot of people think that when you’re fat, you eat all the time but it’s not the case,” she says.

Mondelea adopted a stricter meal plan and started to train at the gym three times a week. Her doctor also wrote a report stating that she was in good health.

Despite this, the immigration office still said she was “not of an acceptable health standard”. Mondelea and her family are overjoyed about the news. (PHOTO: Supplied)

Mondelea and her husband appealed to the Immigration & Protection Tribunal of New Zealand. “A lot of people think that when you’re obese you don’t speak up because you don’t have confidence,” Mondelea says. “I’m not afraid. I can do anything that anyone else can do. My fat doesn’t take anything away from me.”

Mondelea, who now plans to return to university to qualify as a counsellor or social worker, says the process has taken a toll on her and her family.

“I said to my daughter this whole situation makes me think of David and Goliath. I can’t say I didn’t stress but my faith was very strong,” she says.

Mondelea hopes her story will encourage others who are going through a similar situation. “My main goal is always to inspire other people and help them, not just with weight loss but immigration issues too,” she says.

“I’ve grown a lot in the last two years and I’m proud of what I’ve accomplished.”

We live in a world where facts and fiction get blurred
In times of uncertainty you need journalism you can trust. For 14 free days, you can have access to a world of in-depth analyses, investigative journalism, top opinions and a range of features. Journalism strengthens democracy. Invest in the future today. Thereafter you will be billed R75 per month. You can cancel anytime and if you cancel within 14 days you won't be billed.
Subscribe to News24
Related Links
Brendan Fraser is barely recognisable as he packs on the kilos for a new role
What was I waiting for? Rebel Wilson says she's sad it took her until age 40 to lose weight
Simon Cowell is half the man he used to be after incredible weight-loss transformation
Next on You
Ndlovu Youth Choir gets seal of approval from legendary rocker Stevie Nicks