Weight to go! Gauteng teen happy to be rid of 9kg tumour 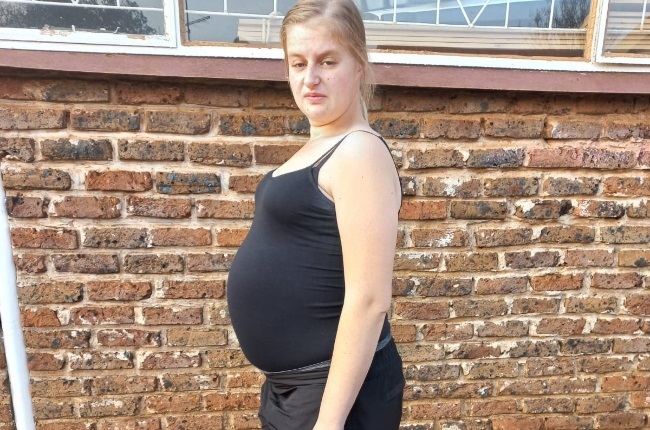 Anell van der Watt was left in terrible pain when a tumour developed on one of her ovaries, causing her belly to swell. (PHOTOS: Supplied)

The year was already stressful with her all-important matric exams looming and the hours she needed to dedicate to studying lying ahead.

But 18-year-old Anell van der Walt of Carletonville in Gauteng had to contend with so much more: a serious illness that left her in excruciating pain and made her the target of taunts, heaping distress upon distress.

“No, I’m not pregnant,” she had to insist over and over again. But the teasing didn’t stop. It wasn’t a baby that had caused Anell’s belly to swell – it was a giant tumour on one of her ovaries.

“The pain was unbearable. I couldn’t lie down properly because the thing was pushing on my insides,” says Anell, who’s a learner at Hoërskool Carletonville. “It brought my life to a halt for a few months. Because of the tumour I missed tests and had to stay at home for long periods.”

And when she did make it to school, she had to deal with another kind of torture.

“The other kids kept teasing me, asking when my baby was due,” she says. It didn’t matter how many times she told them she wasn’t pregnant, the mocking just carried on.

But at last, for the first time in months, Anell is feeling like her old self again after the growth was surgically removed recently.

The tumour weighed a whopping 9kg – the equivalent of three full-term newborn babies – and was the size of a rugby ball by the time surgeons removed it.

“I was really sick for two months before the operation,” she says. “I couldn’t get up and the smell of food made me nauseous.”

All in all, she lost 27kg as the tumour kept growing and growing.

Her family first realised something was wrong with Anell in June, says her older sister, Antoinette de Wet (32), at the home in Carletonville the sisters share with their parents, Johan and Marietjie. Anell doesn’t have medical aid, but the community raised funds so she could have the operation sooner and at a private hospital. (PHOTO: Supplied)

“We’d all gone on an outing to Gold Reef City and I think the bumps and shoves of the rides might have triggered the growth of the tumour. She started feeling ill that day,” Antoinette says.

Anell started complaining of pain in her lower belly and she was constipated too.

“We took her to see our GP and he said there was an obstruction in her intestines,” Antoinette recalls. “He prescribed laxatives and her condition improved for a while but then the pain returned.”

In July, Antoinette went to Durban on holiday and when she returned she could immediately tell something was seriously wrong with her baby sister.

“She was in excruciating pain and she had big, dark rings under her eyes. Her belly was distended too by that stage.”

Antoinette took Anell back to the doctor, who referred the teenager to Leratong Hospital in nearby Krugersdorp where doctors performed blood tests and a sonar.

“Even when I arrived at the hospital, the doctors asked me if I was certain I wasn’t pregnant,” Anell says. “I had to insist that I definitely wasn’t.” Anell with her older sister, Antoinette, who says Anell was teased so badly at school she wanted to drop out. (PHOTO: Onkgopotse Koloti)

She was vindicated when the sonar showed she had a tumour, which at that stage was 26cm long.

“It was the size of a fetus at 36 weeks,” Antoinette says.

There weren’t any specialists at the state hospital who could remove the tumour so Anell was sent home.

“I was still walking around with a huge belly and I was in constant pain,” she says.

She couldn’t enjoy her 18th birthday early in August because she was in such agony, she adds. And through it all, she had to start studying for her exams.

“It was an incredibly stressful time. I didn’t feel like doing anything because I was in so much pain. But I had to write tests and I had to study,” Anell says.

A friend of the family decided to help and made an appointment with a Potchefstroom gynaecologist for Anell, whose family don’t have medical aid.

On 13 August, Anell made her way to the hospital, only to have her hopes dashed again.

“The doctors told me they couldn’t help me immediately and I was put on a waiting list,” she says.

The family decided to get a quotation from a private hospital for the removal of the tumour – but the estimated R75 000 was far more than they could afford, Antoinette says.

“So then I put a status message on my WhatsApp profile asking for help,” she says.

The family was astounded by the reaction from the Carletonville community.

'It was incredible. People immediately offered to help. Businesses, churches and my sister’s school started fundraising. Within a few days we had enough money to pay for the surgery.' — Antoinette

At last, on 27 August, the tumour was removed at Mediclinic Potchefstroom.

Although the growth was benign, one of Anell’s ovaries had to be removed too.

“The doctors say I’ll still be able to have babies, but I shouldn’t leave it too late to try to get pregnant,” she says.

She feels like a new person, Anell says, smiling broadly.

“I have no more pain and I have my self-confidence back. It doesn’t feel like people are laughing behind my back anymore.”

She’s in the middle of her mock matric exams and was set to write her maths paper the day after YOU’s visit.“It feels like a weight has been lifted off me,” she says. “Now I can focus on my schoolwork and make sure I get good marks.

“It’s really wonderful not to be in pain anymore, to be able to walk comfortably and to have my appetite back.”The future awaits for the teenager now.

“I love children. There’s a nursery school in town where I help out part time. I’m hoping to start working there next year and I’d also like to become an au pair.”

Now that she’s no longer weighed down by the tumour, she literally has a new lightness in her step.

We live in a world where facts and fiction get blurred
In times of uncertainty you need journalism you can trust. For 14 free days, you can have access to a world of in-depth analyses, investigative journalism, top opinions and a range of features. Journalism strengthens democracy. Invest in the future today. Thereafter you will be billed R75 per month. You can cancel anytime and if you cancel within 14 days you won't be billed.
Subscribe to News24
Next on You
‘I was trapped in bed for five years’: Cape Town man who used to weigh 300kg opens up about his weight-loss journey