What's sex got to do with it? Johannesburg couple give us the skinny on being nudists Vongani and Basani Nkuna are naturists and love walking around in the buff whenever possible. (PHOTO: Supplied)

At first glance they look like any married couple. They’re dressed in woolly pyjamas with matching robes to ward off the winter chill that’s gripped Gauteng and their child is still asleep in the other room. So far, so normal for a suburban South African couple.

But Vongani and Basani Nkuna indulge in a lifestyle many may consider a bit out there. The pair are naturists and love walking around in the buff whenever possible.

Before the birth of their baby, they’d come home from work and take their clothes off straight away. But since hiring a helper, the couple prefer to hang out at a private club and other resorts where it’s perfectly acceptable to walk around without a stitch of clothing.

Set in a secluded smallholding in Vanderbijlpark, near Vereeniging, the leafy resort offers rooms, a caravan park and campsite where visitors can feel at home wearing nothing but their smiles.

Facilities include an outdoor swimming pool and jacuzzi, a games room and bare barge cruises along the Vaal River. 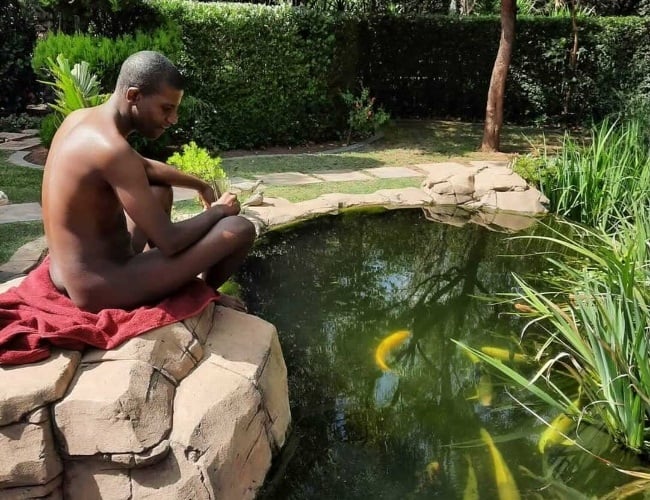 The pair visit nudist resorts whenever they can and enjoy baring it all in the great outdoors. (PHOTO: Supplied)

Vongani (35) and Basani (36) try to head to resorts at least once a month, they tell us via video call. They’re opening up to YOU because they want to lay bare the myths surrounding naturism.

Nudity is often frowned on and sexualised but Vongani says being a naturist or nudist has absolutely nothing to do with sex. “I like social nudity because it makes me feel warm, uplifted and light within nature,” he says.

“My mind quietens, the load melts off my shoulders as my skin enjoys the sun. The air soothes my body and soon enough I forget trivial things.”

Their lifestyle has certainly flabbergasted family and friends, but the couple say what gets under their skin is all the myths surrounding nudism.

They’re not naked all the time, they don’t belong to a sex club and there’s definitely nothing weird about stripping down to their birthday suits.

“God knows us in our most natural state,” says Basani, who grew up in a Catholic home. “When I’m at the resort baring it all, I feel closest to God and nature.”

The couple, who are both from traditional Tsonga backgrounds, have known each other for more than a decade. They met in their hometown of Malamulele in Limpopo, fell in love, married and moved to Joburg to pursue their careers.

“In 2015, I started to feel my life was mundane and routine,” Vongani tells us.

He came across naturism on the internet while researching ways to live a more fulfilled life. “From polyandry to swinging – there was an assortment of lifestyles people were practising,” he says.

Vongani grew up in the Zionist Christian Church and because of his conservative upbringing he wrestled with the rather unconventional lifestyles he discovered online. “But naturism stood out for me because it was non-sexual.” Vongani and Basani hope to one day purchase a holiday home at one of the nudist resorts. (PHOTO: Supplied)

When he approached Basani about trying out naturism, she didn’t raise an eyebrow. Her husband had been practising it in the comfort of their home for years – he’d strip down to the altogether as soon as he got back from work and Basani soon got comfortable with being in the buff too.

“I wasn’t really surprised when he told me about his research,” she says. “We didn’t choose to be naturists and it’s not something that was dictated upon us, it’s something we already were.”

To celebrate her husband’s birthday in 2017, Basani, who works as an environmentalist, booked the couple into a nudist resort to experience social nudity.

It was an exciting but daunting experience. On their way to the bushveld resort north east of Pretoria, Vongani’s nerves started to kick in. “My heart was racing,” he recalls.

Basani was so bashful she refused to take off her underwear at first and they were worried about being the only people of colour.

Also, Tsonga people aren’t meant to see other people naked, Vongani adds. But everything turned out okay in the end.

The guests at the resort were just like those at any regular holiday spot, just without shorts and t-shirts. Still, it took some time for the Nkunas to get comfortable without their kit on.

“We didn’t leave our room for an hour or so,” she says.

When they eventually went exploring, they were as naked as the day they were born. At first, they felt like everyone was staring at them. “Naturism wasn’t really a popular thing for people of colour then, so we did feel out of place,” Vongani says.

They started making friends once they got comfortable in their skin. “Someone joked when you arrive at the resort, people stare at you like you’re the only one naked. “We started to feel comfortable when we realised they were really just admiring us.” Though conservative, Basani enjoys stripping down on naked holidays or at home because it helps her unwind. (PHOTO: Supplied)

The couple loved every moment of the night they spent at the resort. “After years of believing we can only exist in our natural state in private spaces, we had found a community of like-minded people.”

They kept their lifestyle a secret from family and friends for a while but when Vongani decided to write a book, Excuse My Nudeness: But happiness isn't always found where you're led to believe, about their escapades last year, they both knew it was time to tell their family and friends.

Though they were expecting to be judged, most of their loved ones accepted their choice and were eager to learn about naturism. Some of their older relatives, however, flat out rejected it.

But the couple hasn’t let people’s opinions prevent them from finding freedom. They’ve visited several resorts in their six years as social nudists and joined the Gauteng Naturist Association, which has helped them connect with other naturists.

In the past few years the lifestyle has become more acceptable across all spectrums of society. “It’s no longer as taboo,” Vongani says. “We’ve started seeing more people of colour at the resorts. At the end of the day, it’s the misconceptions that people fear the most and not the reality of being a naturist.”

Going on “nakations”, as naked vacations are called, is so therapeutic the pair would love to purchase a holiday home at one of the nudist resorts. “I just feel relaxed and calmer when I’m in that space,” Basani says.

“We definitely see ourselves living there one day.”

We live in a world where facts and fiction get blurred
In times of uncertainty you need journalism you can trust. For 14 free days, you can have access to a world of in-depth analyses, investigative journalism, top opinions and a range of features. Journalism strengthens democracy. Invest in the future today. Thereafter you will be billed R75 per month. You can cancel anytime and if you cancel within 14 days you won't be billed.
Subscribe to News24
Related Links
Jennifer Aniston auctions off iconic nude portrait of herself to donate funds for coronavirus relief
How to deal when your boyfriend/girlfriend wants you to send naked pics
Cat fight! Divorced Durban couple in bitter spat over cat
Next on You
The Bachelor SA’s Lee Thompson has gone from TV stardom to a homeless shelter