“Love conquers everything. Love is magical. We love each other and no pandemic can stop us.”

These are the words of Annie Pretorius from Pretoria who recently tied the knot with the love of her life, AJ Pretorius (33), in what they’ve since dubbed a pandemic wedding.

Speaking to YOU magazine, the 30-year-old marketing and events manager explained how she and AJ not only saved massively on wedding expenses, they also managed to make their wedding day a memorable one thanks to their community.

“AJ was living in Cape Town and he came to Pretoria for a wedding and we met through a mutual friend. We dated and travelled between Cape Town and Pretoria as often as we could, until he eventually managed to move here,” she says.

The couple, who are also parents to Annie’s six-year-old son, Logan, have been together since 2018. AJ popped the question last year when Annie was visiting him in Cape Town.

“We were on the beach and I was very surprised. I had no idea he was going to propose, so it was really special,” Annie recalls.

“We decided that we were going to get married in June 2020. Obviously, at the time we had no idea that the year was going to take such a turn.”

As things started to slowly shut down and lockdown regulations became stricter, the lovebirds decided to put everything on hold.

“But as the months passed, we just decided that we really wanted to get married on 27 June [their original wedding date].” And so they did!

“About five weeks before 27 June were reminiscing about how we would’ve been married in a month’s time.”

They agreed to go ahead with their wedding plans despite the circumstances.

“We mutually agreed to go ahead with the wedding, even though it wouldn’t be the same. Even if let’s say the lockdown ended in September, there was no guarantee that we’d have the money to make the wedding possible with all our loved ones present anyway,” she explains.

With AJ’s parents living in Ghana and his sisters in Durban, there were no guarantees the couple could have their loved ones present for the wedding even once the lockdown has ended.

“So we decided to just do it differently.”

Sticking to wedding tradition with something borrowed, AJ wore a borrowed suit and Annie reached out to a Facebook community of women who own wedding gowns.

“I asked about a wedding gown on the Facebook group and I received such an overwhelming response from all the women on there. It was so precious,” Annie recalls.

While many brides look forward to spending the morning of their wedding getting glammed up and pampered with their bridal squad, Annie did everything herself.

“I did my hair and make-up and bought stick-on nails,” she says.

In the end, they had Annie’s parents and four siblings, Logan, AJ’s brother and sister-in-law and the photographer in attendance. 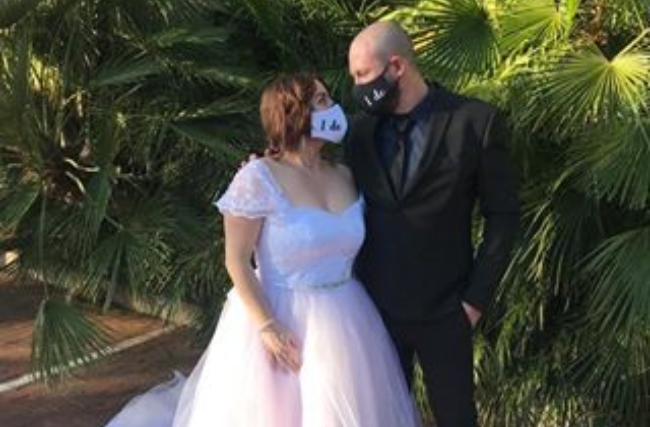 “My dad walked me down into the street where AJ was standing and waiting for me. He handed me over and we found a little section on the pavement that looked like a really nice nursery and we took a couple of pictures in our outfits.”

The couple changed out of their outfits and drove to their pastor’s house where their union was officiated.

While the wedding was unconventional, Annie says she’s grateful to have had the precious moment, and for the love and support from so many people.

“In our country there’s so much going on, especially in terms of race, but when I reached out to a community of women on Facebook there was no sense of discrimination or otherness,” she explains.

“Instead, they all pulled together to make my special day possible and that was so beautiful – that’s what makes a community.”

If they’d gone the traditional way, the couple would’ve spent between R70 000 and R80 000. Instead, they reduced their total costs to just R2 500 which was spent mainly on legal documents and the officiation services.

“At the end of the day it’s about my marriage to my husband and what we’ve promised each other, no matter how many people were present or the costs,” Annie adds.

“We decided to tie the knot in the middle of a pandemic. We’re very grateful that we still had the opportunity to get married.” AJ and Annie Pretorius with their siblings (Photos: Supplied/Patrick Black) Annie Pretorius with her sisters and brother (Photos: Supplied/Patrick Black)
We live in a world where facts and fiction get blurred
In times of uncertainty you need journalism you can trust. For 14 free days, you can have access to a world of in-depth analyses, investigative journalism, top opinions and a range of features. Journalism strengthens democracy. Invest in the future today. Thereafter you will be billed R75 per month. You can cancel anytime and if you cancel within 14 days you won't be billed.
Subscribe to News24
Related Links
Bride slammed for putting her invited wedding guests into categories of importance
Fergie shares her joy following daughter’s wedding
Sister to sister: Princess Eugenie’s sweet message to newly married Princess Beatrice
Next on You
Sex, sleaze and scandal: inside the shocking shenanigans of Silicone Valley's bro culture