Mother who gave birth in Toyota names triplets after car 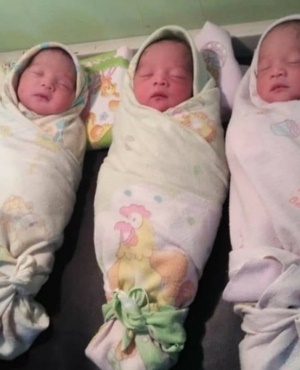 A woman who gave birth to triplets on the backseat of a car has decided to name them all Avanza after the Toyota in which they were born.

Mumun Muafiyah posted that she’d started having contractions while she was being driven to hospital in the Indonesian city of Cilegon.

The hospital is about 25km away from her home.

Five minutes after that she was left surprised when a third baby was born.

The shocked mom told local media she’d been told by a gynaecologist that she was carrying only twins.

Only after all three babies were born did she manage to arrive at the hospital, where the newborns were then given medical care.

Doctors confirmed they were all healthy.

In Indonesia surnames aren’t used, which allows parents the freedom to choose the child’s whole names, so Mumun decided to use the name of the car her children were born in.

A spokesman for Toyota in Indonesia confirmed they’d been told about the honour.

“We want to congratulate dad Azri Prihatna and the mother for the birth of their triplets in the cabin of an Avanza on the way to the hospital. We’re joining in their happiness and pray that the mother and the triplets are in good health."

Last year another Indonesian man named his baby Pajero Sport, which earned him a package of baby supplies.

The regent of Karawang, Cellica Nurrachadiana, was named after the Toyota Celica.

But this pales in comparison to the Indonesian child named Honda Suzuki Impalawati.

We live in a world where facts and fiction get blurred
In times of uncertainty you need journalism you can trust. For 14 free days, you can have access to a world of in-depth analyses, investigative journalism, top opinions and a range of features. Journalism strengthens democracy. Invest in the future today. Thereafter you will be billed R75 per month. You can cancel anytime and if you cancel within 14 days you won't be billed.
Subscribe to News24
Next on You
Permanent closure of businesses and the sickly being rushed to hospital, this is how loadshedding is affecting South Africans