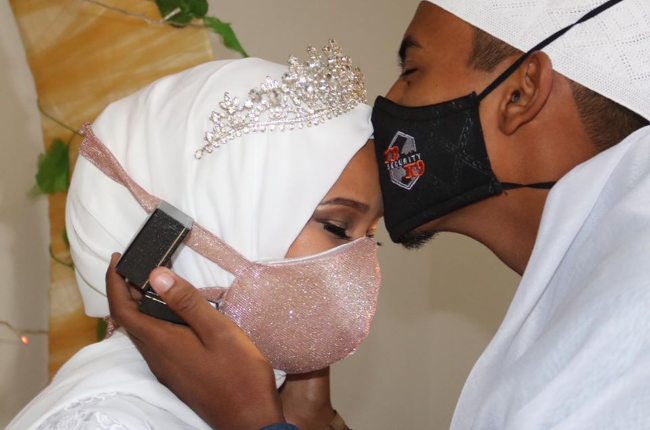 This couple is redefining wedding ceremonies under lockdown.

Aqeelah and Tanweer Regal from Athlone, Cape Town, were due to have their wedding ceremony on 21 June.

But when the 21-day lockdown was announced in South Africa followed by an extension, the engaged pair considered putting their plans on hold.

Speaking to YOU magazine, the couple revealed how subsequently they’d got the genius idea of a drive-by wedding, which also helped them to save a few rands.

“We met seven years ago through a family friend,” Aqeelah (22) tells YOU.

They kicked off their relationship as close friends as Aqeelah was still in high school and wanted to focus on her studies.

In 2016 they officially started dating and in November 2019 got engaged, which was soon meant to be followed by a proper ceremony with 600 guests on 21 June 2020.

“Initially we were meant to have this big wedding in a hall. This was before corona and before lockdown started and was our initial plan,” Aqeelah recalls.

“But then some of our guests didn’t want to settle for pictures, they decided they still wanted to see us on the day and that’s how the drive-by wedding idea was created.”

It was two days before 21 June that they decided to unconventionally continue with their plans for their big day. However, in the hours that followed, they encountered a challenge.

“My neighbour who had cancer passed away the night before and we were worried that our drive-by wedding time was going to clash with his funeral,” Tanweer (23) told YOU.

“Fortunately we have considerate neighbours – we went to offer our condolences to them and this was when they told us they’d move the funeral to an earlier time – we were so fortunate.”

The bride donned an elegant all-white dress, a matching headscarf and a veil with a sparkly mask, alongside her groom dressed in an all-black suit and a matching mask – the wedding was officiated in their garage. 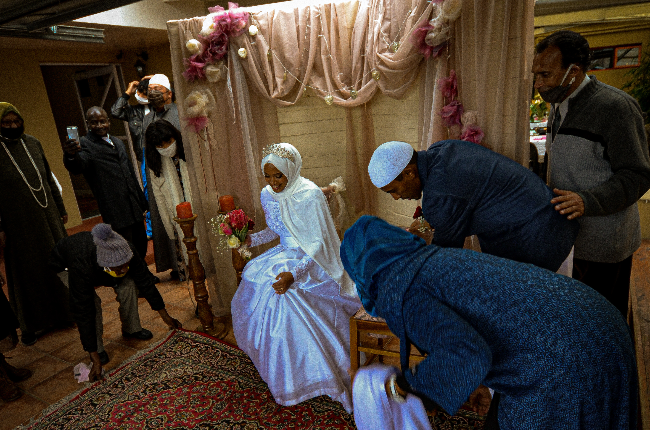 “We’d planned to have a stage in the driveway and all but it started raining so we moved into our garage instead,” Tanweer explained..

“I waited for four years so I was excited,” he confessed about their big day

“It was still very nice because we had our close family drive by in their cars,” the newly married Aqeelah said.

The drive-by took place in Surrey estate between 12:30 and by 13:15 they’d wrapped up their intimate ceremony.

After saying their “I do’s”, the pair stood outside umbrella-in-hand to show off their wedding outfits, receive gifts and thank their guests with food punnets.

“We asked everyone to please stick to the lockdown rules and remain in their cars. Take your photo, get your punnet of food and carry on driving to make way for others.” the couple added.

“Every single person got something,” the elated groom added.

They’d initially budgeted for 600 guests which would’ve cost R150 per head. “We cut our costs close to nothing compared to what we would’ve paid,” Tanweer revealed.

While Aqeelah is currently a fourth-year civil engineering student and Tanweer is a manager for security companies, the newlyweds look forward to moving into their own home together after lockdown.

“He’s really caring and is always there to help someone else . . . That’s one of the things I love the most about him,” the new wife said speaking of her husband.

“She has the most patience for me and she understands the kind of person that I am . . . she’s very respectful,” Tanweer replied. Related Links
PICS: 7 cousins are bridesmaids at one another’s weddings
Couple who cancelled wedding due to Covid-19 host stunning pretend wedding with pug as best man
Lockdown nuptials: Cape Town couple celebrate lockdown wedding with novel ceremony
Share
Next on You
‘My babysitter quit after reading my private texts – and I feel violated’