The mom who’d been involved in a car accident on her way to the Driehoek school tragedy, has finally had her dream wedding.

Debbie Coetzee (46) from Vanderbiljpark, Gauteng, wed the love of her life on the banks of the Vaal River on Sunday 30 March.

“She was the most beautiful woman I’d ever seen,” the groom, Kruger Crause (46), told YOU about the moment he saw his bride.

Debbie can’t stop gushing about Sunday’s wedding ceremony and reception. Everything – from the flowers and table decorations, to the cake, her dress and Kruger’s suit – had been sponsored by local suppliers.

“Everyone went out of their way to make it special for us. We couldn’t have asked for a better day. It was perfect. We can only say thank you,” Debbie tells us.

On 1 February this year an elevated walkway at Hoërskool Driehoek in Vanderbiljpark collapsed, killing four learners and injuring more than 20 others. Debbie had been on her way there to pick up her daughter and Kruger’s son when she was in a car accident.

Thankfully, Debbie’s daughter, Rizaan (14), and Kruger’s son, Johan (15), weren’t among those injured in the walkway collapse.

But Debbie would only find this out four days later when she woke up in hospital. Another car had allegedly cut her off at a traffic light. The impact caused Debbie to be flung about 30m from her car. She sustained serious head injuries and was hospitalised for more than two weeks.

Debbie and Kruger had been planning to get married at the end of February but because of the accident, they had to postpone their plans.

Lindie van Niekerk and her daughter Jeanne Jacobs own the family restaurant Mimi se Plaaskombuis in Vanderbijlpark. Lindie had read about Debbie’s accident in YOU’s sister magazine Huisgenoot and decided she wanted to help. She reckoned the venue would fit the couple’s original plan for a “small, intimate farm wedding” to a T.

Lindie and Jeanne immediately started organising the wedding, calling around for sponsors.

“It was awesome. Crazy,” says Kruger about the fantastic wedding that was organised for them." Ford in Vanderbiljpark provided transport from the nearby Clivia Lodge, where the wedding party got dressed, to the venue. Clivia Lodge also provided a night’s accommodation for the couple, as well as breakfast the next morning.

Leandri Marx, who took the wedding pictures, told YOU, “It was wow! It was so beautiful seeing the love those two have for each other.”

Asked about his favourite moment, Kruger says, “When my wife said ‘yes’ to me!”

The couple have been together for three years. Debbie says she’ll never forget the look on Kruger’s face when he first saw her in her wedding dress, which had been provided by local designer Coleen Pienaar.

Though Debbie hasn’t fully recovered from her injuries, she says she made it through the busy wedding day.

“By 3pm I was exhausted but I managed,” she says. 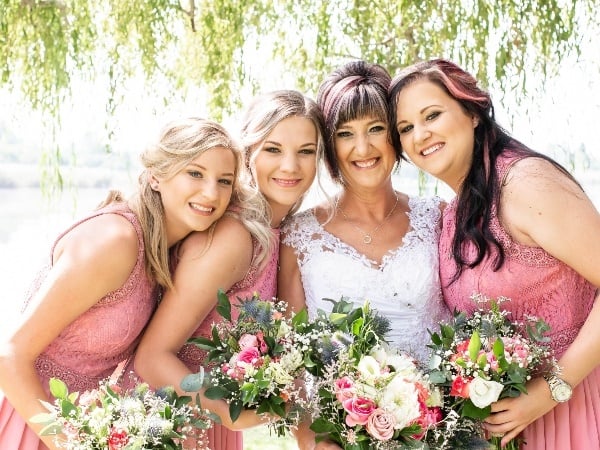 But she’s back at work with Kruger at Herza Auctioneers.

She says the Friday before the wedding she’d had her hair done at a salon and it was the first time she’d driven a car again since the accident.

“When Kruger drives I get terribly nauseous,” she says. “It was better when I could drive myself.”

We live in a world where facts and fiction get blurred
In times of uncertainty you need journalism you can trust. For 14 free days, you can have access to a world of in-depth analyses, investigative journalism, top opinions and a range of features. Journalism strengthens democracy. Invest in the future today. Thereafter you will be billed R75 per month. You can cancel anytime and if you cancel within 14 days you won't be billed.
Subscribe to News24
Related Links
Injured Driehoek pupil ready for rehab after 53 days in hospital
Driehoek principal's sad farewell after school tragedy: 'It's goodbye but not quite final yet'
Mom of Driehoek pupil to get her dream wedding after car accident
Next on You
Thrills, spills, medals and controversy – it all went down at the action-packed Commonwealth Games in Birmingham