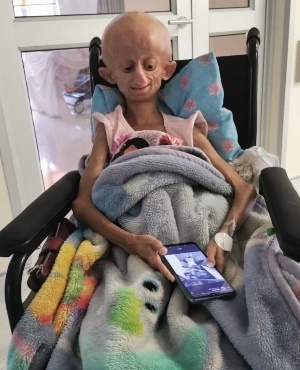 The Booysen family from Pretoria recently went through a tough time when their teenage daughter Beandri had to spend a week in hospital after a complicated surgery.

Bea Booysen, 14-year-old Beandri’s mom, told YOU that Beandri’s hip got dislocated on Saturday, 15 February. The following Tuesday both her hips were operated on and plates inserted in her legs to prevent this from happening again.

Beandri is one of just about 125 people worldwide who suffer from Hutchinson-Gilford progeria syndrome. It’s a rare genetic disorder that causes sufferers to age eight times faster than other children. At 14, Beandri looks like a little old person and weighs only 12,5kg.

“It only took a light knock for Beandri’s hip to be dislocated – she didn’t even fall over when it happened,” Bea says.

After doctors at Netcare Montana Hospital in Pretoria unsuccessfully tried to put the hip back in its socket, an orthopaedist tried doing it under anaesthesia. But all for naught – Beandri’s hip kept dislocating. The writing was on the wall that surgical intervention was needed.

Beandri lost a bit of blood but the surgery went well. She spent about a week in the paediatric high-care unit before being discharged on 25 February.

While in hospital, Beandri had two special visitors: one of her favourite singers, Brendan Peyper, and Beandri’s toy pom, Tinki.

“She was very happy to see Brendan and hold her little dog,” Bea says.

“There’s long road to recovery ahead and we’re learning how to help her,” Bea explains.

Bea and her husband, Pieter, wish to thank their friends, family, the orthopaedist Dr Andrew Patterson, Beandri’s paediatrician Dr Gerhard Burger and the anaesthetist Dr Dennis MacDonald. Bea says they wouldn’t have coped without all these people’s help.

“And thanks to the Lord that He blessed us with a strong, brave little angel and that He’s always guarding over her,” Bea says.

We live in a world where facts and fiction get blurred
In times of uncertainty you need journalism you can trust. For only R75 per month, you have access to a world of in-depth analyses, investigative journalism, top opinions and a range of features. Journalism strengthens democracy. Invest in the future today.
Subscribe to News24
Next on You
Meet the woman who grew over 2 metres tall due to an undiagnosed tumour

Read more on:
surgeryteenpretoria
LATEST YOU