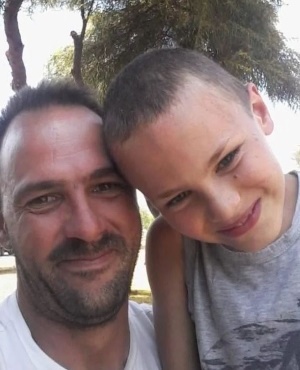 Shelly Botha, from Randfontein in Gauteng, says it’s heartbreaking to see her father’s daily struggle – including having to keep a brave face for his 10-year-old son, who’s on the autism spectrum.

Shelly took to the Facebook group “I lived in Randfontein and survived” last week in an attempt to help her dad, Eugene Barnard (42).

She says Eugene is struggling financially to survive.

“We’re urgently looking for a job for me,” she writes on the group. “I’m not asking for money or donations.”

“I’ve asked for help before and people think my dad can’t care for Ryan [his 10-year-old son] properly or that we’re just after the money but it’s really not the case,” Shelly writes.

“My dad is honest, honourable and hard-working and I just want the best for him.”

The company Eugene works for is battling, she says, and that’s why his salary wasn’t paid in the past few months.

“He’ll get R200 or R300 now and then but no one can survive on that. It breaks my heart to see my dad so desperate and helpless.”

“I try to help where I can but I’m not always able to. Ryan’s medication is expensive and so are diapers.

“My dad is a hard-working man – he gets up at the crack of dawn to go to work. He told me he’s hoping and praying he’ll get paid a salary on Friday [28 February] but the chances are slim.”

Eugene is a single dad.

“He needs to stay strong for my brother and I think he’s trying to be brave for me but I can see the sadness in his eyes. I can see he’s wondering where the money to look after Ryan is going to come from.

“He’s a wonderful and loving dad.”

Shelly says Eugene has loads of experience, having worked in the construction industry for years.

“We’re not begging for money. I just wish he could find another job.”

We live in a world where facts and fiction get blurred
In times of uncertainty you need journalism you can trust. For 14 free days, you can have access to a world of in-depth analyses, investigative journalism, top opinions and a range of features. Journalism strengthens democracy. Invest in the future today. Thereafter you will be billed R75 per month. You can cancel anytime and if you cancel within 14 days you won't be billed.
Subscribe to News24
Next on You
Why Jesse Hess' father still can't find peace after her cousin is convicted of her murder

Read more on:
financedad
LATEST YOU