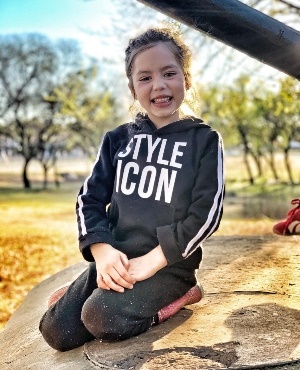 A massive search is under way for kidnapped six-year-old Amy-Lee de Jager, who was snatched from her school in Vanderbijlpark, Gauteng, early this morning.

The Grade R pupil at Kollegepark Primary was allegedly kidnapped by four men in a white Toyota Fortuner when her mother dropped her off at school at 8 am.

Captain Kay Makhubela, provincial police spokesman in Gauteng, confirmed the incident but said the details of what happened were still sketchy.

“The public shouldn’t trust information shared on social media – rather rely on information released by the police.”

News of the shock snatching of the little girl has spread like wildfire on social media. There have been reports that the kidnappers contacted the girl’s father to demand R2 million ransom.

Though police aren’t confirming the ransom report, Ferdi Steyn, a friend of the De Jagers, has confirmed it to YOU.

Police have stopped a white Toyota Fortuner in Meyerton, north of Vereeniging, but Captain Makhubela says it wasn’t the kidnappers’ vehicle.

Steyn also reiterated that the public shouldn’t believe all the information disseminated on social media.

“It’s rumoured that she’s been found but that’s not true. People shouldn’t trust that information [on social media] because they’ll take their eyes off the road and as a result we’ll never find her.”

YOU has been unable to contact Amy-Lee’s father, Wynand, who’s a teacher at Carel de Wet Technical High School in Vanderbiljpark, and he hasn’t responded to messages.

“He’s keeping his line open for any possible information the kidnappers or the police can provide,” one of his colleagues said.

“Wynand isn’t at school. The whole town is looking for the [kidnappers’] car.”

We live in a world where facts and fiction get blurred
In times of uncertainty you need journalism you can trust. For only R75 per month, you have access to a world of in-depth analyses, investigative journalism, top opinions and a range of features. Journalism strengthens democracy. Invest in the future today.
Subscribe to News24
Next on You
Hiking is for chubby girls too! Cape Town woman starts body positivity community

Read more on:
ransomkidnap
LATEST YOU