A brave toddler, who’s battling a rare brain cancer, has received numerous greeting cards from strangers hoping to make his birthday one to remember.

Gemma Spicer (28) and John Grattan (27) from Surrey, England, were left stunned when hundreds of birthday cards for their son, Jacob, who turned two on 16 August, started flooding their letterbox.

John’s sister, Jade Barret, had launched a Facebook appeal on 13 August for cards as a surprise for her nephew who suffers from choroid plexus carcinoma – a rare malignant brain tumour, according to the Mayo Clinic.

The little boy spent his birthday smiling from ear to ear, sitting among heaps of brightly coloured envelopes, which his brother, Harley (4), helped him open.

The touching gesture from so many people all over the world has left Gemma and her fiancé, a self-employed tradesman, overwhelmed by people's generosity.

“The night before, I’d been speaking to her and I said, ‘We don’t even know if Jacob will be here for his birthday next year,” Gemma said.

“Now his cancer has stopped reacting to treatments, they can’t give us a timescale.

“So Jade decided to put out the post on Facebook and she texted us about it. We never expected this kind of response at all. We’ve ended up with more than 300 cards. It’s amazing.

“And it’s not just from people who know us or people in our village. They’ve come from all over the world. It's completely overwhelming.

“There were so many handmade cards from children, and some parents had written us beautiful letters. One dad who lost his son wrote to us to say his son was watching over Jacob from heaven.

“So many people have written to us offering for us to visit their horses or their play centres.”

Along with cards and invitations of family days out, one anonymous stranger even had a star named after Jacob. 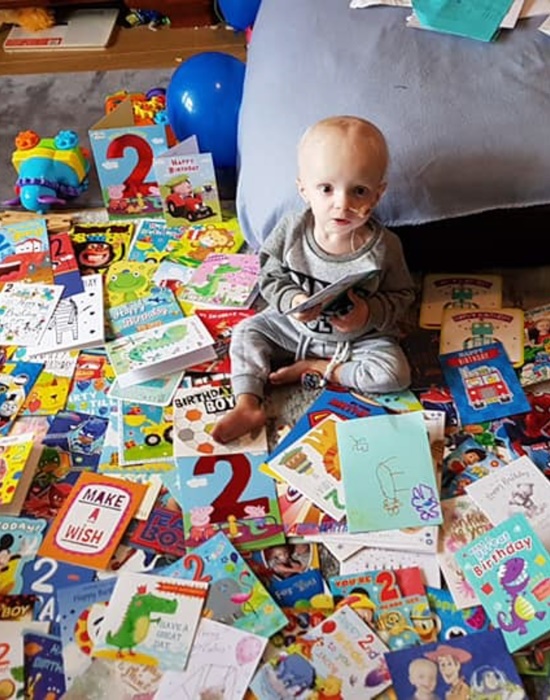 In a desperate bid to cure his cancer, the little boy has undergone eight surgeries, 11 rounds of chemotherapy, around 20 blood transfusions and 15 platelet transfusions.

Gemma and John received their son's devastating diagnosis in March last year after watching him endure a gruelling 10-hour long surgery to remove a tumour that filled a ventricle in his brain.

“Jacob was a happy and healthy baby from the day he was born but suddenly at six months [old], he started to get really irritable.

“People told us he was probably just going through a growth spurt but it really didn’t feel right. We took him to a doctor and she wasn’t happy either so we were sent to Epsom Hospital.

“The doctors there raised concerns over the size of Jacob’s head. It was looking bigger than it should be.

“They did an ultrasound which showed a tumour filling an entire ventricle of his brain and he also had hydrocephalus – a build-up of fluid that was causing his head to swell,” the mom of two said.

After five months of chemotherapy, more surgery and several transfusions, the parents were given the all-clear.

“When we got told there were no more signs of cancer just before his first birthday it was such an incredible relief.

“\That moment was just amazing. We were surrounded by all the nurses who’d watched him grow up. It was fantastic,” she said.

But the family’s happiness was short-lived when five new tumours appeared in March this year.

This time around the little boy hasn’t been responding to chemotherapy and his parents have been told to focus on making happy memories.

“We went back every month for scans to make sure the cancer hadn’t come back. Every month was clear until March and then suddenly he had five more tumours.

“I was alone when the consultant called me. I had just got into the car. I burst into tears,” Gemma said.

“The consultant told me and John to take time off work and focus on making memories as a family. It was heartbreaking. We haven’t been back to work since.

Gemma said that she and her husband have been trying their best to make life as comfortable as possible for Jacob.

“His outlook on life and his positivity after all he’s been through make you get up and carry on and try to make a normal life for him,” Gemma said.

“We do have to think about him not being here one day.”

We live in a world where facts and fiction get blurred
In times of uncertainty you need journalism you can trust. For only R75 per month, you have access to a world of in-depth analyses, investigative journalism, top opinions and a range of features. Journalism strengthens democracy. Invest in the future today.
Subscribe to News24
Related Links
Newlywed raises R1.9 million to save his life after terminal diagnosis
Young bride dies 24 hours after her dream wedding
Damascus: Syria's first lady starts breast cancer treatment
Next on You
Mpumalanga parents open up about the day their family of 5 was attacked by a swarm of angry bees

Read more on:
ukcancer
LATEST YOU