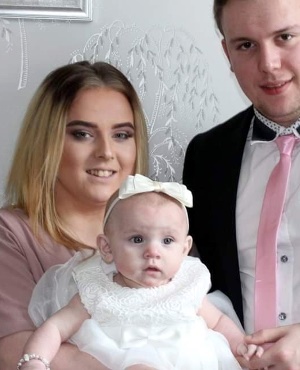 A traumatised mom has issued a warning after her baby daughter almost died from a kiss on the lips.

One-year-old Kaylah Merritt was hospitalised for four days last month after a family member suffering a cold sore kissed her.

The tot quickly developed an “awful” purple rash over her body and after crying in pain was rushed to hospital by concerned parents Brogan Thomas and Connor Merritt (both 22) from Staindrop in County Durham, northeast England.

"Kaylah was crying so hard, I knew it could only mean she was in pain,” stay-at-home mom Brogan said.

"We were at home and I was about to put her in the bath when I suddenly saw all the marks on her legs.

“It was an awful nightmare, there were purple rashes everywhere and Kaylah was sobbing her heart out.

“I was terrified, my first thought was it had something to do with meningitis because she had it before. My fiancé was petrified but he kept me calm and made sure Kaylah was calm too.

"I instantly knew we had to take her to the hospital.”

Kaylah was diagnosed with Eczema herpeticum, an infection caused by the herpes virus, and needed two courses of antibiotics and various creams to soother her skin.

Her parents are now urging people to be aware of the risks of kissing a baby on the mouth after doctors said Kaylah’s experience could have been fatal.

"The doctors told us someone with a cold sore must have kissed her on the lips and because babies' immune systems aren’t strong enough she developed the rash.

“When the doctors told me how dangerous it was I cried and cried thinking how I could have lost her due to a silly kiss.

“Connor was shocked and couldn't believe all this was down to a kiss too.

“If we hadn’t gone to the hospital quickly, it could have been very dangerous, we could have lost her.”

Kaylah previously survived meningitis and needed a lumbar puncture to save her.

She was discharged after four days but her parents say she still hasn’t fully recovered.

She has to take daily medication until the virus is completely destroyed and must attend doctor's appointments on a weekly basis.

“I’m over the moon Kaylah's home now and enjoying herself with her toys and extra cuddles,” Brogan said.

“I just want other parents to know, you don’t have to be physically ill to harm a baby – you can just be a carrier of the virus and still affect them."

WHAT IS ECZEMA HERPETICUM?

Eczema herpeticum is an infection usually caused by the herpes simplex 1 virus. It’s usually responsible for the appearance of cold sores on the mouth or other parts of the body.

People with atopic dermatitis and other skin diseases are more prone to getting infected, and the condition is more common among infants and young children.

Symptoms of the infection include blisters, high fever and swollen lymph glands and it’s proven deadly in some cases.