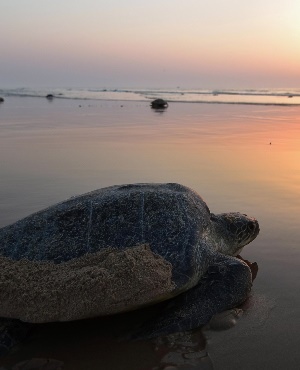 This was the tragic scene when an endangered sea turtle was found dead after reportedly defecating plastic bags.

Arnel Emplamado, from Poblacion village in the Philippines, found the dead green sea turtle while walking along the coast.

Poblacion village official Bill Kratzer said the turtle had no visible signs of injury but had excreted plastic bags.

“It looked a bit damaged, especially the tail part,” he said.

Environmental officials at the nearby town of Valladolid advised residents to bury the turtle, which they did later that day.

Sea turtles are under threat from plastic pollution, which has become one of the world's biggest environmental concerns, and green sea turtles are listed as endangered on the International Union for Conservation of Nature (IUCN) Red List.

According to scientists, the creatures mistake the plastic bags for jellyfish and end up eating them.

An Australian study in September last year recorded turtles that had swallowed hundreds of pieces of plastic. As few as 14 fragments of plastic can significantly increase their risk of death.

A UN Environment Programme report last year listed the Philippines as one of the five countries that produce about half of the world’s plastic waste that end up in the ocean.

We live in a world where facts and fiction get blurred
In times of uncertainty you need journalism you can trust. For 14 free days, you can have access to a world of in-depth analyses, investigative journalism, top opinions and a range of features. Journalism strengthens democracy. Invest in the future today. Thereafter you will be billed R75 per month. You can cancel anytime and if you cancel within 14 days you won't be billed.
Subscribe to News24
Next on You
Taliep Petersen's daughter on her mom Najwa's parole: 'People must forgive her'