VIRAL: Watch the sweet moment when a mother and son graduate together in surprise ceremony A touching moment coordinated by two university heads to confer a mother’s degree at her son’s graduation ceremony has gone viral.

Stephan Wilson and his mom, Sharonda, were both looking forward to graduating from their respective universities in Michigan in the US, Buzzfeed News reports.

There was just one problem – their ceremonies fell on the same day.

Stephan was set to graduate with a degree in fine arts in musical theatre from Central Michigan University, while his mother was scheduled to graduate with a bachelor’s degree from Ferris State University but she decided to skip her own ceremony so she could attend her son’s.

In the days leading up to the graduation, Sharonda posted her predicament on Facebook and among those who saw the post was a student who worked in the president’s office at Central Michigan, CNN reports.

The student told Central Michigan University’s president, Bob Davies, about the situation and he contacted his counterpart at Ferris State University to find out if he could confer Sharonda’s degree. "It was a very fast turnaround," Ari Harris, the spokesperson for Central Michigan, told CNN.

The two university heads surprised both Stephan and his mom by presenting Sharonda with her own graduation cap, and a mini ceremony during Stephan's graduation.

"I’d been looking forward to walking across that stage and accepting my degree for a long, long time," Stephan said in a statement.

To attend her son Stephan’s commencement ceremony, Sharonda Wilson was unable to attend her own from Ferris State University. Learning this, @cmichprez contacted FSU President Eisler and was able to confer her degree on behalf of FSU's president and trustees. #cmichgraduation pic.twitter.com/anCSTHDCdC

"Earning my degree was such a huge milestone in my life, and having my mom with me to celebrate that moment was an unbelievable blessing. I’m so proud of us both."

"Sharonda and Stephan both put in the long hours and hard work, and they deserved the chance to celebrate together as a family," Davies said in a statement. 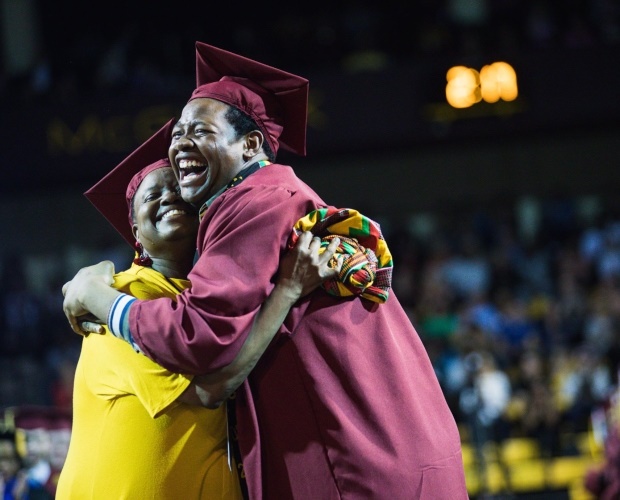 "We appreciated the opportunity to partner with our friends at Ferris State to recognise and celebrate this milestone achievement for both Stephan and Sharonda."

The tear-jerking moment won major applause on the big day and has since gone viral on Twitter with more than 704 000 views, Fox News reports.

We live in a world where facts and fiction get blurred
In times of uncertainty you need journalism you can trust. For only R75 per month, you have access to a world of in-depth analyses, investigative journalism, top opinions and a range of features. Journalism strengthens democracy. Invest in the future today.
Subscribe to News24
Related Links
Graduate gets double joy
Applause as guide dog leads visually impaired student on stage for graduation
University throws graduation ceremony for campus cat
Next on You
The shock, the drama, the tears: how football star Christian Eriksen nearly died on the pitch

Read more on:
useducation
LATEST YOU