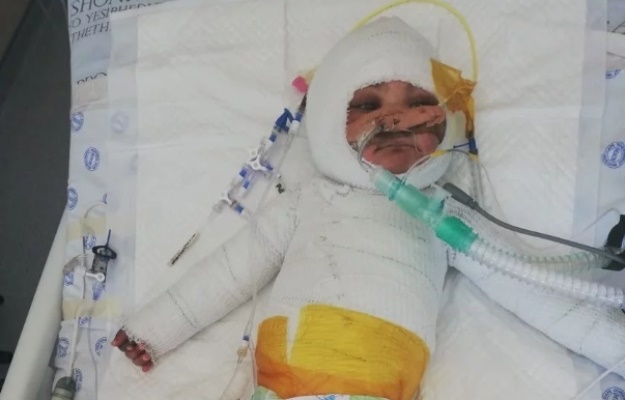 One-year-old Denay Kuhn, from Arniston in the Western Cape, fell into a bath full of hot water more than three months ago and sustained second- and third-degree burns. She’s been on a ventilator ever since the accident.

Then she contracted an infection in hospital, says Denay’s mom, Myrtle (19).

For weeks doctors administered several types of antibiotics in an effort to cure the infection but Myrtle said none of it worked.

Denay is in the Red Cross War Memorial Children’s Hospital in Cape Town.

“They kept telling us she’s not doing well and we should prepare ourselves for the worst because the antibiotics weren’t working and there’s nothing they could do. On Saturday, they tried the last type of antibiotic they could and for the first time it looks as if there’s improvement,” Myrtle tells YOU. “She opened her eyes and lifted her arms. I can see she recognises me. We’re hoping they can take her off the ventilator today.”

On Tuesday, Denay was taken into theatre to clean her wounds. Myrtle, who’s by her baby’s side every day, says the doctor told her it’s the first time Denay’s condition remained stable throughout the procedure.

“It’s actually a miracle. She just slept. Her face was swollen; now, only her feet are still swollen,” Myrtle says.

The young mom had boiled bathwater on the stove after the family’s geyser broke, so the water was scalding hot when Denay fell in. Myrtle had turned around to get a towel and in that moment, the toddler tumbled into the water. A neighbour rushed them to hospital.

“It’s really tough being so far from family and home. My parents can’t afford to visit often – it’s R600 petrol money here and back.”

Both Myrtle and her boyfriend, (23), are unemployed. Myrtle had to quit her job to be by Denay’s side.

Keeping up with your growing baby: A childproofing guide for parents