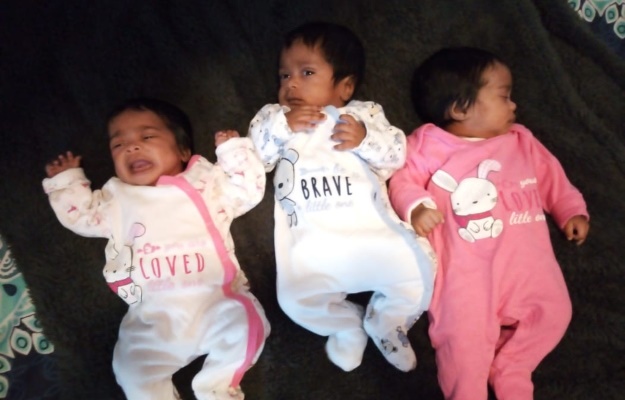 What if you found out in your third month of pregnancy that you’re expecting not one, not two, but three babies?

That’s exactly what happened to Fagmeeda Adams from Cape Town.

Fagmeeda (35), already a mom of two, was told in December when she was three months pregnant that she was having twins.

“I went to the Rocklands Clinic in Mitchells Plain to make an appointment for the delivery. They referred me to the Mitchells Plain District Hospital because they said I was too big for three months.”

During her examination at that hospital she was told she’s having twins. “A girl and a boy, they said,” she tells YOU.

“I was already shocked to hear I’m having twins. No one in my close family has twins and I’d never even considered having twins,” she says, adding that she and her husband, Sheraaz Jack (31), hadn’t planned on having more kids. Because Mitchells Plain District Hospital doesn’t do delivery off twins, they referred her to the Mowbray Maternity Hospital in Cape Town. That’s where a scan revealed another shock.

“There they told me I’m expecting triplets!”

“I was upset. Such a lot of things went through my mind.”

Her biggest concern was money – they’d suddenly have three extra mouths to feed.

“I was worried about the finances. But I only felt that way for the first few days after finding out about the triplets.” The babies, two girls and one boy, were born at 32 weeks on Wednesday 27 March. The boy, Amirudeen, weighed 1,6kg, while his sisters Aasiyah and Asma weighed 1,4kg and 1,2kg respectively.

Sheraaz, a construction worker, is over the moon with his triplets. “But he doesn’t think as far ahead as I do,” says Fagmeeda, an administrator at a spice company. She’s still worried about money.

“It’s three extra mouths, three extra school suitcases. And my company wants me to go back to work next week [from maternity leave]. I don’t know if I’ll be able to.

“At the moment we’re living with my mom because she really helps me a lot.”