This toddler is allergic to everything from sunshine to ice-cream Summertime is not at all fun for this tot!

Little Carys Pickles, from Warwickshire in England, has had severely sensitive skin since she was born, and can’t even be out in the sun for five minutes without being covered in itchy red rashes.

The four-year-old also has an allergic reaction to chlorine in swimming pools, suntan lotion, grass, an ice-cream because of her intolerance to cow’s milk.

Her mom Sophie (25) has been forced to cancel their summer holiday this year in fear that Carys will have a potentially fatal reaction abroad.

“Summer is meant to be the most exciting time of year for kids, but for Carys, it’s one of the most dangerous times,” says Sophie.

“Ever since she was born she’s been allergic to a lot of things, but over the past year, it’s got even worse.

Now, the family, including dad Liam (30), and sisters Amelia (5), and nine-month-old Phoebe hope to find a way Carys can be pain-free for the next few months.

“We’re dreading the summer because there are so many precautions that we have to take to make sure she’s not in pain. 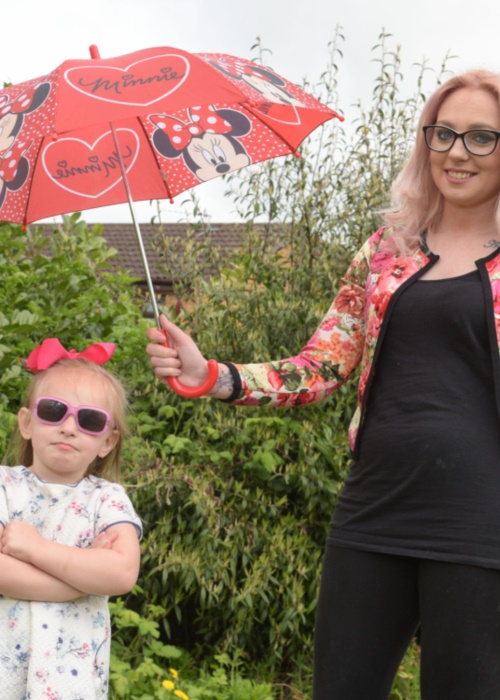 “She’s even allergic to suntan lotion, so we have to use a special one for her, and swimming pools, so she can’t go in there to cool down.

“And we have to be careful at BBQs in case Carys gets hold of tomato ketchup, as she will come out in a rash.”

Despite her allergy to the sun only being identified last year, the four-year-old has suffered from reactions since she was born.

And after being rushed to the hospital numerous times with life-threatening reactions, the mom-of-four now lives in fear of what her daughter will react to next.

“Every day it seems there’s something new that Carys reacts to, and it’s a constant fear of how bad the next reaction will be.

“When she was five-days-old we had to call an ambulance because she had a reaction to milk, and they’ve just got worse since.

“It started off as her just getting red patches across her body, but now she can get completely swollen from head-to-toe in five minutes,” says the mom. Sophia is now in search of answers with doctors as to why her daughter is a ‘walking allergy’ and how to stop the pain.

“Her allergies are continually getting worse and she has become a walking allergy – there are days where she will react to absolutely everything,” says Sophie.

“Despite taking her to numerous doctors, no one can tell us what is actually wrong with her.

“Seeing her go through pain and having to have a cautioned life, without being able to enjoy what other children are doing, breaks my heart.

“We hope that she will get a diagnosis soon so that this will be the last summer that she is intolerable allergic to!”