5 things Queen Elizabeth gets up to while visiting Balmoral Castle Covid-19 may have scuppered the holiday plans of many Brits but luckily Queen Elizabeth has a string of castles at her disposal so there’s no shortage of options when she feels like a change of scenery.

The 94-year-old monarch and her husband, Prince Philip (99), recently set off on their annual holiday to Balmoral Castle in Scotland.

This means that for the next 12 weeks the couple will get to breathe in the fresh country air after months of being in lockdown together at Windsor Castle.

Balmoral is reportedly the queen’s favourite residence by far and she spends every summer at the 20 000-hectare estate in Aberdeenshire, about 200 km from Edinburgh.

Here are five things that she’ll probably be getting up to over the next few months as she relaxes and unwinds during her well-deserved break.

Every morning she wakes up to the sound of bagpipes played by a lone piper stationed just below her bedroom window. It might not be everybody’s cup of tea but as far as the queen is concerned, it beats a noisy alarm clock.

Queen Elizabeth dotes on her corgis so of course they get to go on holiday with her.

A few years ago Princess Eugenie revealed how her beloved grandmother loves to walk her dogs at Balmoral. Queen Elizabeth II of England at Balmoral Castle with one of her Corgis, 28th September 1952 (Photo: Getty/Gallo Images)

While visiting Balmoral, the royals like to spend much of their time in the great outdoors whether it’s for a walk, picnic or even grills for lunch.

On previous visits Prince Philip has often been spotted manning the grill and barbecuing sausages for lunch but now as he’s almost 100, he’s surely ready to hand the tongs to someone else. It’s rumoured that Prince William will be visiting with his wife, Kate and their children, so maybe he’ll be prepared to take over braai duties from his grandfather.

Because of Covid-19, he and other visiting members of queen’s family such as Prince Charles and Prince Edward won’t stay in the 52-bedroom castle but will instead be housed at other properties within the grounds. They will be able to meet the queen and Philip for outside activities, including walks, horse riding and picnics. 4.    Pitching in to help with the chores

When she’s at Buckingham Palace or Windsor Castle, the queen has staff waiting on her hand and foot but when she’s at Balmoral, relaxing with herr family, she tries to live as “normal life as possible” which means helping with menial chores.

Former UK Prime Minister Tony Blair, once recalled his astonishment at seeing Her Majesty doing the dishes during a visit to Balmoral.

“The queen asks if you’ve finished, she stacks the plates up and goes off to the sink,” he said.

Although she knows the estate like the back of her hand, the queen still enjoys exploring the grounds – either on horseback or while driving her trusty Range Rover. 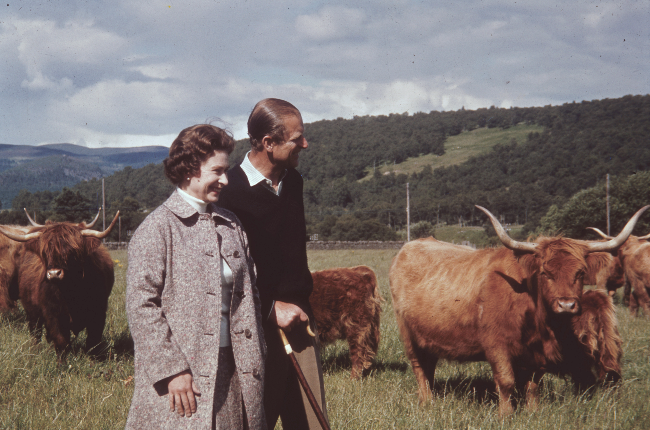 Queen Elizabeth II and Prince Philip in a field with some highland cattle at Balmoral, Scotland, 1972. (PHOTO: Getty Images/Gallo Images)

We live in a world where facts and fiction get blurred
In times of uncertainty you need journalism you can trust. For 14 free days, you can have access to a world of in-depth analyses, investigative journalism, top opinions and a range of features. Journalism strengthens democracy. Invest in the future today. Thereafter you will be billed R75 per month. You can cancel anytime and if you cancel within 14 days you won't be billed.
Subscribe to News24
Related Links
The Duke and Duchess of Cambridge send heartwarming thank you cards to fans
Royals wish Meghan Markle a happy birthday as she turns 39
Staycation for The Cambridges!
Next on You
Former royal nanny Tiggy Legge-Bourke's name is finally cleared after she was accused of having an affair with Prince Charles