As The Netherlands' Princess Alexia heads off to boarding school, we take a look at her laidback family 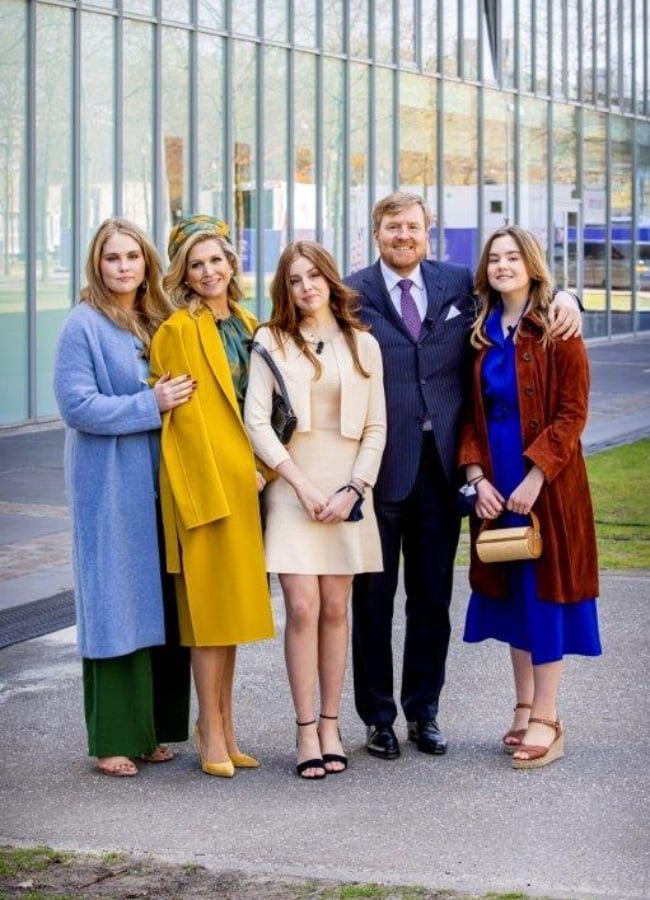 Heartfelt hugs, lumps in throat and promises to call home – it’s never easy saying goodbye to a child who’s off to boarding school. For any parent it’s a moment that tugs at the heartstrings, whether you’re blue-blooded or just like us.

King Willem-Alexander (54) and Queen Maxima (49) of the Netherlands surely felt no different when they bid farewell to their middle daughter, Princess Alexia, who left for her new boarding school in Wales recently.

It was a proud moment for the pair, and they couldn’t resist sharing a photo on Instagram of their 16-year-old with her bags standing outside the royal palace Paleis Huis ten Bosch in The Hague.

Looking like a typical teenager in an oversized plaid shirt, ripped jeans and white trainers, Alexia looked raring to go as she stood with a guitar case slung over her shoulder, a wide grin on her face.

The caption, originally written in Dutch, read, “Princess Alexia is leaving for the United World College of the Atlantic (UWC Atlantic College) in Llantwit Major in Wales. She will go there for her International Baccalaureate for the next two years.”

The International Baccalaureate (IB) is considered one of the world’s most respected educational programmes and involves a mix of academic and vocational work. It fosters critical thinking and problem-solving skills.

The school, situated in a 12th century castle along the country’s south coast, offers activities and subjects like tai chi and Tibetan literature, which has led to it being dubbed Hippie Hogwarts. It’s favoured by European royalty and Alexia’s father went there at 16. The 12th century castle in Wales that houses the United World College of the Atlantic where Princess Alexia of the Netherlands has headed to. (PHOTO: Gallo Images/Getty Images)

Alexia’s two-year course, which forms part of her secondary studies, comes with a hefty price tag – £67 000 (R13,4 million) to be exact. But that won’t be a problem for her family, who are one of the richest royal houses in Europe. A 2019 report estimated their fortune to at a whopping £10,7 billion (then R197,95 billion).

They may be one of the world’s wealthiest royal families but the Dutch princesses are rather down to earth. Alexia and her two sisters – Princess Catharina-Amalia (17), heir to the Dutch throne, and Princess Ariane (14) – and their parents seem to be refreshingly real.

Their mom, Queen Maxima, may have something to do with it. She was born in Argentine to a normal family and worked in marketing before marrying the future king.

She didn’t know he was a royal when they met and didn’t believe him when he later told her he was a prince.

Maxima’s ordinary upbringing no doubt influenced how casual and relaxed the royal household is. In January she was famously caught taking a Zoom call from her palace desk while barefoot, showing she’s just like many moms working from home.

Her daughters are also without airs and graces. Both Catharina-Amalia and Alexia attended a regular school, the Christelijk Gymnasium Sorghvliet in The Hague, which offers activities such as hockey, ballet, horse-riding and music.

Catharina-Amalia chose to stay at the school instead of heading for Wales, and graduated with honours in June.

In keeping with Dutch tradition, she raised the country’s flag along with her backpack in a video shared to the family’s social media accounts.

The future queen caused something of a stir when she recently said she wouldn’t take her €1,6m (about R27,2 million) annual allowance from taxpayer’s money, which is her birthright when she turns 18.

In a handwritten letter to Dutch Prime Minister Mark Rutte she wrote, “On 7 December 2021 I will be 18 and, according to the law, receive an allowance.“I find that uncomfortable as long as I do not do anything for it in return, and while other students have a much tougher time of it, particularly in this period of coronavirus.”

The young royal, who plans to take a gap year before starting her studies, also said she wouldn’t claim the money “until I incur high costs in my role as Princess of Orange”.On King’s Day, the celebration of her father’s birthday in April, she elaborated a bit more on her plans. “I want to travel a little, discover the world, do things that I may not be able to do in 20 years’ time,” she said. By all accounts the king and queen have a great relationship with their offspring.

Like many proud dads, King Willem-Alexander took the picture of Alexia showing her leaving for Wales. Queen Maxima and youngest daughter Ariane took part in a Vlog workshop last year where they were quizzed by Dutch YouTuber Enzo Knol.

When asked what she is like, Maxima joked that her daughter would probably say she is a “very difficult mother, who is always very strict, always cranky and who has no energy”.

However, Ariane did the opposite, praising her mom, especially her ability to juggle her private and professional lives.

'I think, given the work my mother always does, that she is doing very well.'
Princess Ariane

Maxima applauded her daughter’s answer saying, “Bravo!”. Adding, “This was not scripted!”

Of course it’s not always like that, Ariane added, saying that “sometimes there is, of course, a bit of stress”.“But I think all parents sometimes have better days and sometimes worse days, but in general it is very nice.”

Her mom agreed, displaying the warmth that seems to make their family seem downright normal. “We can laugh very much with each other.”

Wouldn’t it be nice if all royal families got on so well?