They were once the oldest and bestest of mates and they did almost everything together – from playing polo to partying and holidaying together.

But the once close friendship that existed between Prince Harry and Tom “Skippy” Inskip took a serious battering once a certain glamorous American actress came on the scene.

In yet another revelation from Finding Freedom, the best-selling book about the Sussexes, authors Omid Scoobie and Carolyn Duran say that Tom warned Harry to “take it slow” with Meghan Markle in the early stage of their romance.

Tom – who was dubbed Harry’s wingman in their youth – apparently suggested the pair should live together before “doing anything more serious”.

Even though a source close to the duke and duchess told the book’s authors the advice “came from a good place”, sensitive Harry “didn’t totally see it that way”.

“It really hurt him that someone he was so close to would not trust his judgment,” the source adds. 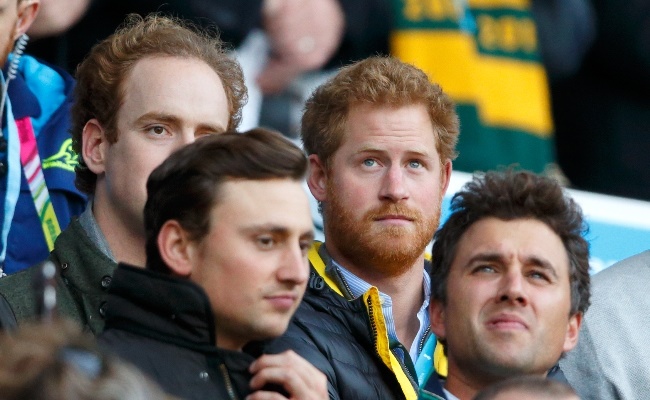 Poor Tom couldn't have known Harry was already on tenterhooks after his older brother, Prince William, had pretty much told him the exact same thing.

According to the book, Harry went crazy when a concerned William told him to “take as much time as you need to get to know this girl”, and regarded the words “this girl” to be condescending and snobbish.

So it was clearly a very hurt Harry who retaliated by excluding Tom, a banker, and his wife, Lara Hughes-Young, from his and Meghan’s wedding party at Frogmore in 2018.

Instead he invited a slew of his and Meghan’s new celebrity pals such as Oprah Winfrey and George Clooney.

Tom and Harry have a long history going back to their days as schoolboys at posh boys’ boarding school Eton. Tom’s father, Owen Inskip, also happens to be a close friend of Harry’s dad, Prince Charles, and Tom and his sister, Victoria, have known Harry and William since childhood.

Their friendship continued well into their 20s where they were regulars on the nightclub scene and it was Tom who apparently organised the infamous party in Las Vegas in 2012 where Harry was bust in his birthday suit, playing naked billiards with a group of young women in a hotel suite. Tom’s wedding to literary agent Lara in Jamaica in 2017 was one of Harry and Meghan’s first public appearances together as a couple.

However, after Harry wed Meghan, he cut him off completely. According to the Express, Tom’s “tomfoolery” had no place in the world of “fruit smoothies” and “early nights” that Meghan was a fan of.

“Like several others who were considered a questionable influence on Harry during his bad old bachelor days, Tom has been dropped, even though he himself now has a lovely wife, Lara,” a friend told the publication at the time.

Several reports have hinted at a thaw, however, saying the two reached out to each other after Tom’s mother-in-law passed away following a long battle with mental health issues last year.

Harry is, of course, an outspoken advocate on the topic of mental health.