A down-cast looking Harry and Meghan were spotted in their Range Rover with Meghan's mom in the backseat on Sunday. (PHOTO: Backgrid/Greatstock)

If a picture tells a thousand words, then this one says: Prince Harry and his wife, Meghan, have a lot on their mind.

The couple looked very serious when they were spotted driving around Santa Barbara in their Range Rover on Sunday, just hours before the release of two teaser clips from their hotly anticipated interview with Oprah Winfrey.

Seated behind Meghan was her mom, Doria Ragland, who’s reportedly been helping out with toddler Archie, who turns two on 6 May, and is spending a lot of time in the Sussexes’ Montecito mansion.

READ MORE | The royal 'divorce': All you need to know about Meghan and Harry's final break from The Firm

There’s a lot going on in Meghan and Harry’s world these days. Their upcoming interview is being billed as the biggest royal tell-all since Princess Diana’s notorious Panorama interview where she spoke of her unhappy marriage.

The broadcast, set to air on the American CBS network on Sunday 7 March, is expected to cover a number of controversial and private topics, from Megxit to the couple’s experience of life within the royal family.

Oprah has admitted “no subject is off limits”. Royal experts have even warned the royal family should “hide behind the sofa” over fears as to what the couple will say. A scene from the teaser that recently aired showing Oprah Winfrey interviewing the Sussexes at their Santa Barbara mansion. (PHOTO: YouTube/Access)

But with Harry’s grandfather Prince Philip (99) still gravely ill, many fans and royal commentators believe the Sussexes should ask that the broadcast be postponed. It could be seen as being “insensitive” to the queen in particular as her husband lies in hospital, receiving treatment for a pre-existing heart condition. At the age of 99, Philip is becoming increasingly frail.

Still, Her Majesty is continuing to do what she does best: keep calm and carry on. Which of course means duty before all else.

As a sign of her fortitude, the 94-year-old monarch appeared remarkably upbeat during a video call with officials in Australia to witness the unveiling of a new statue of herself. On greeting them, the queen joked about the time difference. “Good morning. Well, that’s good morning to me. It looks . . . I don’t know what time of day it is to you.” 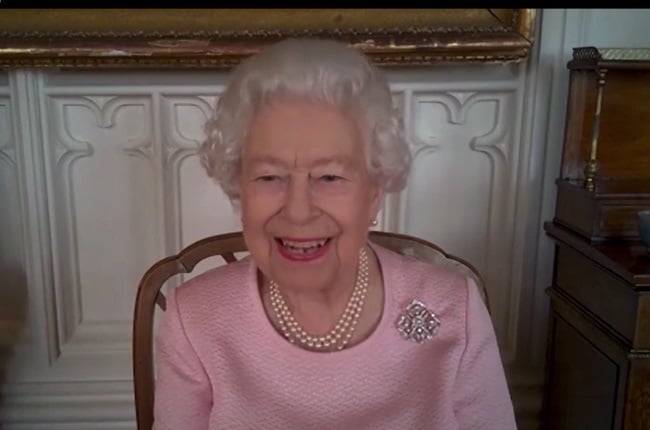 Her Majesty appeared upbeat on the day of her virtual chat with officials in Australia. (PHOTO: Youtube/The royal family) The queen chats to Australian sculptor Robert Hannaford during a video call to officials in Australia for the unveiling of a new statue of her. (PHOTO: Youtube/The royal family)

She also smiled and chuckled at the sight of the new sculpture, which has been erected on the grounds of Government House in Adelaide and depicts her carrying her trademark Launer handbag.

The video call was released by the palace the same day Philip was transferred from King Edward VII Hospital in London, where he’d spent two weeks, to St Bartholomew’s Hospital for “testing and observation” for his heart problem.

Apparently, the Duke of Edinburgh has been informed of the latest goings-on regarding Harry and Meghan. He has in the past left no doubt as to his feelings about their stepping back from royal life – and suffice to say he’s not impressed. A frail Prince Philip remains in hospital in London as he battles a heart condition. (PHOTO: Gallo Images/Getty Images)

In her book Prince Philip Revealed, author Ingrid Seward wrote that the duke, who retired from public duty in 2017, was “deeply hurt” by Harry and Meghan’s decision to quit the Firm. He could “neither understand nor relate” to Harry’s decision to leave the royal family.

Now his grandson and granddaughter-in-law are set to air their linen to Oprah – and the world – in what’s being called the scoop of the century. The talk show queen herself has reportedly described it as “the best work I’ve ever done”.

The broadcast has already been extended from 90 minutes to a full two hours, reportedly to add in the official conclusion of Megxit, which occurred a day after the couple sat down with Oprah at their California home.

The teasers already speak volumes of what’s to come, including Harry’s big reveal that one of the reasons they “stepped back” was that he “feared history would repeat itself” – a reference to the British press’ treatment of his late mother, Princess Diana.

He references his mom again where he tells Oprah that he’s “just really relieved to be sitting here talking to you with my wife at my side because I can’t imagine what it must’ve been like for her [Diana] going through this process by herself all those years ago”.

In another scene, Oprah asks Meghan if she was “silent or silenced” during her time with the royal family, to which the Suits actress is seen rubbing her bump while gently nodding. In another admission, Harry says the process of leaving royal life has been “unbelievably tough” for him and Meghan before adding, “but at least we have each other”. Oprah isn’t the only talk show host Harry has opened up to recently. He surprised royal fans when he dished up personal details during an informal interview with James Corden (42) recently.

Their chat, which aired on Corden’s The Late Late Show on CBS, showed the pair enjoying a trip around LA on an open-air double-decker bus which included a visit to the house where the sitcom The Fresh Prince of Bel-Air was set. Turns out the two are long-time pals and James and his wife even attended Harry and Meghan’s 2018 wedding.

About Los Angeles: “I’ve never been sight-seeing. This is the first time I’ve had a chance to see LA.”

On quitting the royal family: “It was stepping back rather than stepping down. It was a really difficult environment, as I think a lot of people saw. We all know what the British press can be like and it was destroying my mental health. I was like, this is toxic. So, I did what any husband and what any father would do – I need to get my family out of here. But we never walked away – I’ll always be contributing. My life is public service. Wherever I am in the world, it’s going to be the same thing.”

On the series The Crown: “They don’t pretend to be news. It’s fictional but it’s loosely based on the truth. Of course, it’s not strictly accurate but it gives you a rough idea about what that lifestyle, what the pressures of putting duty and service about family and everything else, what can come from that.”

On his son, Archie: “My son is just over a year-and-a-half now and he’s got the most amazing personality. He’s already putting three, four words together. He’s already singing songs.” And Archie’s first word? “Crocodile – three syllables!”

On breakfasts: “My grandmother asked us what Archie wanted for Christmas and Meg said a waffle maker. She sent us a waffle maker for Archie, so for breakfast Meg makes up a beautiful organic mix in the waffle maker.“He loves it and now I have waffles for breakfast – a bit of yoghurt, a bit of jam on top. I don’t know if that’s the right thing to do – a bit of berries, a bit of honey, maybe some syrup. Now Archie wakes up in the morning and literally just goes, ‘Waffle?’”

On a regular night in: “Depending on how the day’s been, we do Archie’s tea [a British term for dinner], give him a bath, read him a book, put him down, go downstairs. Meg might cook a meal or order a takeaway, go upstairs, sit in bed, turn the TV on, watch some Jeopardy, maybe a little Netflix.”

Meghan’s nickname for him: When James called Meghan at one point, she revealed her cute nickname for her husband when she asked him, ‘Haz, how’s your tour of LA going?’”

We live in a world where facts and fiction get blurred
In times of uncertainty you need journalism you can trust. For only R75 per month, you have access to a world of in-depth analyses, investigative journalism, top opinions and a range of features. Journalism strengthens democracy. Invest in the future today.
Subscribe to News24
Related Links
New statue to honour Princess Diana: 5 things you need to know
Princess Eugenie and Meghan Markle: inside the friendship of the two royal moms
At your service! Harry and Meghan help women’s shelter in Dallas after storm chaos
Next on You
Speculation mounts Prince Andrew may make his comeback after Prince Philip’s death