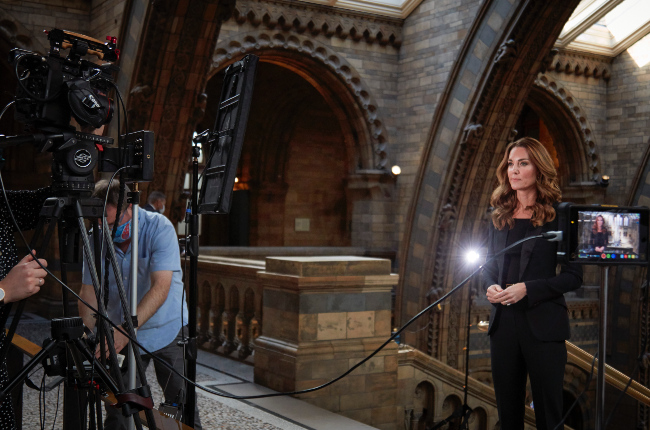 Kate behind the scenes at the museum (Photo: CAMERA PRESS/GREAT STOCK)

The wife of Prince William oozed sophistication in a chic black suit from one of her favourite labels, Alexander McQueen.

She teamed it with perfectly coiffed hair and subtle makeup as she expressed her delight at the opening of one of her favourite places, which was forced to close its doors earlier this year amid the coronavirus pandemic.

Tomorrow. 8PM BST. @NHM_WPY. As Patron of the Natural History Museum, The Duchess will announce the winner of this year’s Wildlife Photographer of the Year for the competition’s first virtual awards ceremony. Tune in on Tuesday to see this year's spectacular image! #WPY56

Filming an address in the famous Hintze Hall, the 38-year-old said, “It is so wonderful to be back at the reopened Natural History Museum, where we can all enjoy its treasures once again.”

Social media erupted as fans praised the mother of three for looking “classy”, “sophisticated” and “as beautiful as ever”.

The Cambridges have thrown their weight behind environmental concerns and last month attended a special outdoor screening with Sir David Attenborough of his new film, A Life on Our Planet. They were accompanied by their children, Prince George (7), Princess Charlotte (5) and Prince Louis (2), who also asked the 94-year-old expert some animal-related questions.

Meanwhile, Prince William has said he was recently forced to turn off an Attenborough documentary about extinction as his eldest son became too upset.

“I don’t want to watch anymore,” the little boy said. “Why has it come to this?”

The king-to-be said his son’s response spurred him on to launch his most recent green initiative, the Earthshot Prize, aimed at “repairing the planet”.

Launched this past week by William and The Royal Foundation, the aim of the £50-million (more than R1 billion) prize is to find solutions to repair the planet over the next decade.Nominations open on 1 November and the prize is open to anyone – individuals or teams, which could comprise engineers, activists, schools, governments, banks and businesses and regions.

The winner will be chosen next year.

We live in a world where facts and fiction get blurred
In times of uncertainty you need journalism you can trust. For only R75 per month, you have access to a world of in-depth analyses, investigative journalism, top opinions and a range of features. Journalism strengthens democracy. Invest in the future today.
Subscribe to News24
Next on You
‘I thought it was super cool of her’ – Princess Eugenie gushes over Selena Gomez’s scar