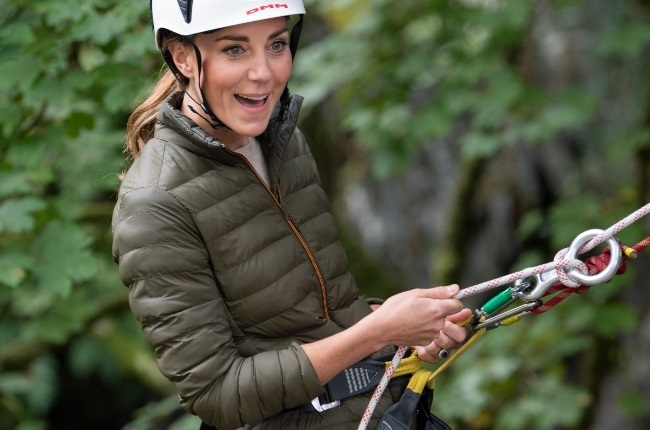 The Duchess of Cambridge takes the plunge at the Windermere Adventure Training Centre with RAF Cadets in the Lake District, UK. (PHOTO: Gallo Images/Getty Images)

There really is nothing the Duchess of Cambridge can’t do.

Earlier this week the British royal mother of three showed off her athletic prowess by going abseiling and mountain-biking with a group of cadets in Cumbria, England.

Then, on Thursday night, she dazzled in a designer gown while hosting an event to thank those who worked on her Hold Still project.

The 39-year-old chose an elegant cream blazer dress with a chiffon midi skirt by Self-Portrait for the occasion. Kate, who’s a keen photographer, started the Hold Still campaign during lockdown in 2020, asking the public to submit images that best portrayed life during the pandemic.

The result was Hold Still: A Portrait of our Nation 2020, a book featuring 100 poignant and personal portraits chosen from 31 000 entries. On its release in May, it quickly became a bestseller, proving yet again that there’s nothing Kate can’t conquer.

She also posted a thank-you message on Instagram, saying it took "a long time to bring everyone behind this incredible project together in person but tonight we finally managed it.

'The idea came right at the start of the pandemic, and aimed to bring people and communities together, using the amazing power of photography'
Kate Middleton

“It was made possible by so many partners, and what’s more remarkable is how it was all orchestrated from kitchen tables and spare bedrooms!”

It’s been a busy week for the royal who was seen abseiling and mountain biking with the Air Cadets during a visit to the Lake District in Cumbria. Sporty Kate proved to be quite a natural at mountain biking. (PHOTO: Gallo Images/Getty Images)

A video posted on her and Prince William’s Instagram account showed her tackling the adventurous challenges with her trademark cheer and dazzling smile.

Later she met with surviving “Windermere children”, orphaned children who’d been rescued from concentration camps during World War 2 and taken to the area in 1945 to recuperate. Kate joined a boat trip on Lake Windermere with a group of holocaust survivors dubbed the "Windemere Children" in the Lake District. (PHOTO: Gallo Images/Getty Images) She joined a boat trip with a few, who gushed about their interaction with the royal afterwards.

"She was absolutely delightful," said Ike Alterman, a 93-year-old survivor from Poland who was a prisoner at Auschwitz, Buchenwald and Theresienstadt.

"We laughed, she asked questions and she wanted to know the answers. We talked about her kids and my kids, and how we love the lakes. I have two girls and two grandchildren. I told her what happened to me during the war and when I arrived and how I progressed in business later."

'I didn't know what to expect, but we spoke like a couple of friends. She was so down-to-earth'
Ike Alterman

Arek Hersh (92), a survivor of Auschwitz, called her "very nice". "She was very interested."

He says their encounter "brought back happy memories" of being on the lake. "It took some years to get rid of the whole situation. I lost everybody, my parents, brothers and sisters."

We live in a world where facts and fiction get blurred
In times of uncertainty you need journalism you can trust. For 14 free days, you can have access to a world of in-depth analyses, investigative journalism, top opinions and a range of features. Journalism strengthens democracy. Invest in the future today. Thereafter you will be billed R75 per month. You can cancel anytime and if you cancel within 14 days you won't be billed.
Subscribe to News24
Next on You
King of the clink: How William has inherited a prison too in his vast property portfolio