I felt dirty and ashamed: Virginia Giuffre on why she decided to speak out about Prince Andrew 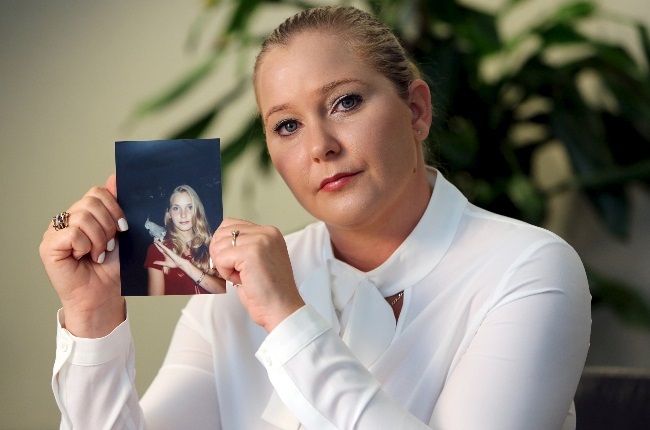 Virginia Giuffre holds a photo of herself taken a year after she started working for Jeffrey Epstein, who was later convicted of procuring an underage girl for prostitution. (PHOTO: Gallo Images/Getty Images)

The 38-year-old accused the Duke of York of forcing her to have sex with him three times in Jeffrey's Manhattan mansion and at other locations between 1999 and 2002 when she was a minor.

“Prince Andrew committed sexual assault and battery upon Plaintiff when she was 17 years old,” the lawsuit states.

“As such, Prince Andrew is responsible for battery and intentional infliction of emotional distress pursuant to New York common law. The damage to Plaintiff has been severe and lasting.”

In a statement, Virginia revealed that she filed the lawsuit to hold the British royal accountable.

“The powerful and rich are not exempt from being held responsible for their actions,” she said.

“I hope that other victims will see that it is possible not to live in silence and fear, but to reclaim one’s life by speaking out and demanding justice.

“I did not come to this decision lightly. As a mother and a wife, my family comes first – and I know that this action will subject me to further attacks by Prince Andrew and his surrogates – but I knew if I did not pursue this action, I would be letting them and victims everywhere down.”

In a previous issue (YOU, 19 December 2019), YOU wrote about why Virginia decided to speak out about the 61-year-old royal. Read the story below.

To most of the world she’s “the girl in the photograph”. To Prince Andrew she was so inconsequential he couldn’t even recall ever having posed for the incriminating picture with his arm around her bare midriff, much less remember her name – or so he claims.

Back in 2001, Miami-born Virginia Roberts was a naive teen who couldn’t speak up for herself. But now she’s a grown woman of 35 and she wants everyone to know what happened that night when she was pictured with the prince.

In a recent interview with British TV news show Panorama that the royal family were no doubt dreading, Virginia elaborated on her claims that at age 17 she was trafficked to London by subsequently convicted sex offender Jeffrey Epstein and forced to have sex with Andrew. The infamous picture of Virginia with Prince Andrew, which she says was taken on the night of their first sexual encounter. She was only 17. (PHOTO: Gallo Images/Getty Images)

The 59-year-old British prince had already had his turn to talk about that night in his own TV interview – a train smash of a show that brought him global disgrace and resulted in him being stripped of his royal duties (YOU, 5 December).

Virginia, on the other hand, was so candid in her emotional interview she earned widespread praise for her bravery at being willing to take on the towering institution of the monarchy.

In excruciating detail she told how after she was introduced to Andrew, her excitement turned to disgust as she danced with him at Tramp nightclub in London. “He was a hideous dancer and he was sweating profusely all over me. I just remember like, ugh, I need a shower. It was disgusting.”

She felt even more repulsed when it became clear she was expected to have sex with the prince.

“It didn’t last long, the whole entire procedure. It was disgusting,” she says of the sexual encounter.

Afterwards Andrew just got up, said “Thanks” and walked out, she says.

“I sat there in bed just horrified and ashamed, and felt dirty.”

Although she claims Epstein had lent her out previously to his powerful friends, this encounter was different.

Her life today couldn’t be more different to the one she led when she was caught up in Epstein’s web of sleaze. As a suburban housewife and mother of three, Virginia, who now goes by her married surname, Giuffre, lives in a gated community in Cairns, Australia, which is dotted with palm trees and surrounded by a lush rainforest.

Residents say she can often be seen out doing the school run or popping out to the shops.

“She’s probably the most open, friendly person you could care to meet,” another school mom says. Last year Virginia, a committed animal lover, offered a large reward for the return of her errant red-tailed black cockatoo, Daisy, and for her birthday this year she asked friends to donate to a dog sanctuary instead of giving her gifts.

The family enjoy having braais on the beach and she and her husband, Robert, a martial arts expert, can sometimes be seen playing the slot machines at a local casino.

In an interview with Australia’s Woman’s Day magazine she said Robert is quite protective of her.

And he’s been supporting her wholeheartedly as she’s pursued her case against Epstein (66), who committed suicide in a New York prison cell earlier this year while awaiting trial on further sex charges involving minors.

When she crossed paths with the billionaire hedge-fund manager she was a vulnerable teen who was no stranger to abuse. Growing up in Florida, Virginia was sexually molested by a family member from the age of seven.

“My childhood was quickly taken away from me,” she says.

In her teens she ran away from home and ended up living on the streets. Then at 16 she landed a job at Donald Trump’s Mar-a-Lago resort in Palm Beach, working as a locker-room attendant.

That’s where she met Epstein’s then girlfriend, British socialite Ghislaine Maxwell (now 57), and was offered the chance to work for the billionaire as a massage therapist.

She claims that as she travelled with the financier between his homes in New York, New Mexico and the US Virgin Islands, it became clear her job extended beyond massages and that she was expected to sexually pleasure Epstein and his friends.

“I was trafficked to politicians, professors, even royalty,” she says in a recent interview with Australian news show 60 Minutes. She claims she had sex with Andrew on three occasions.

Epstein used her as a way of having some dirt on his friends and explained to her it was always handy to “have something on someone, just in case he needed it”, she says.

But Virginia says that after each sexual encounter she felt dirty. “You’re not even acknowledged as being alive or there.

There wasn’t one time I was trafficked to any individual that I thought, ‘He’s an okay guy’.” And that includes Andrew, she says.

She finally got her chance to escape Epstein’s clutches in 2003 when she was 19. He sent her to do a massage course in Thailand, where she met Robert. After a 10-day romance, they married and eloped to Australia. Today Virginia leads a quiet life in Australia with her husband, Robert, and their three kids. She says after becoming a mother to a daughter she felt compelled to speak out in 2011 about the abuse she says she suffered while in Epstein’s clutches. (PHOTO: Facebook)

In 2007, out of the blue, she got a call from an FBI agent. They were investigating Epstein and wanted her help but Virginia was reluctant to get involved.

“I was still scared to death,’’ she says. “Jeffrey used to tell me he owned the entire Palm Beach police department. I just didn’t want my family harmed.’’

But after giving birth to her daughter she had a change of heart and went public with her claims in 2011.

“It took me having a daughter and looking at this beautiful innocent baby to say, ‘I want to speak out about it now’,” she says.

Evidently her allegations caused plenty of sleepless nights for Andrew. In a 2014 email sent to Ghislaine at 5.50am, which was shown in the Panorama interview, he writes, “Let me know when we can talk. Got some specific questions to ask you about Virginia Roberts.”

Meanwhile another unidentified woman involved in the legal case against Epstein’s estate has come forward with claims that she too had sex with Andrew.

Several women are suing the estate for the abuses they suffered but Virginia isn’t among them.

In terms of UK law, as she was 17 at the time of her alleged encounter with Andrew, she was above the age of consent so she can’t take legal action against him. But all she wants is for people to believe it happened.

“I implore the people in the UK to stand up beside me, to help me fight this fight, to not accept this as being okay,” she says.