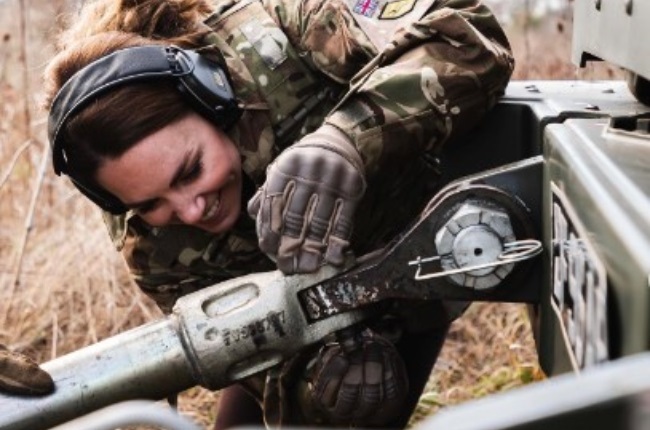 Kate Middleton was seen in full military gear checking out equipment during a visit to a British army training facility. (PHOTO: Instagram/dukeandduchessofcambridge)

Kate Middleton proved yet again there is nothing she cannot tackle in her royal role.

While she only shared the photos now on her and Prince William’s official Instagram account, they were in fact taken last November during a visit. The duchess is welcomed on her arrival at the military base. (PHOTO: Instagram/dukeandduchessofcambridge) The royal spent time talking to the recruits. (PHOTO: Instagram/dukeandduchessofcambridge)

She accompanied the pictures with a heartfelt message in which she thanked the armed forces “at sea, on land and in the air, here in the UK and around the world” for their “sacrifice to keep us safe”.

“Last year, I was honoured to spend time with the @BritishArmy to see how they train serving personnel and new recruits. It was wonderful to see first-hand the many important and varied roles the military play day in, day out to protect us all.”

To show she had personally posted the message, she signed off with a ‘C’. There are reportedly plans afoot for Kate to play a more active role in the military in future.(PHOTO: Instagram/dukeandduchessofcambridge) The royal was seen sporting a military helmet. (PHOTO: Instagram/dukeandduchessofcambridge)

Kate was a military wife when William was a search-and-rescue pilot for the RAF in Wales.

There are reportedly plans for her to play a more active role in the future with the RAF and Royal Navy.

We live in a world where facts and fiction get blurred
In times of uncertainty you need journalism you can trust. For 14 free days, you can have access to a world of in-depth analyses, investigative journalism, top opinions and a range of features. Journalism strengthens democracy. Invest in the future today. Thereafter you will be billed R75 per month. You can cancel anytime and if you cancel within 14 days you won't be billed.
Subscribe to News24
Next on You
As Prince William turns 40, he celebrates in a way that would've made Princess Diana proud